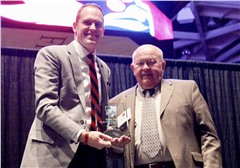 In the Southeast Missouri State Athletic’s 18th overall and 2019 Hall of Fame Class, former Redhawk and current Cash-Book Journal President Gerald Jones was one of the six individuals to forever be inducted last Friday night at the Show Me Center.

After graduating from Jackson High School in 1957, Jones was a runner for both the cross country and track and field teams at SEMO from 1959 to 1962. He was a team captain in both sports, while also serving as the cross country team’s coach his final two years.

In his senior year at SEMO, Jones broke a combined 28 records in cross country and track in the MIAA Conference as well as school, course, meet and stadium records. One of his most notable records set was in the mile when he recorded a time of four minutes, 20.3 seconds nearly 60 years ago.

Jones also started and coached the first cross country team at Jackson while he was a freshman at SEMO in 1959 and did so until his senior year of college. After graduation, Jones returned to Jackson and coached the cross country and track teams as both programs won the conference and district championship all five years he was there until 1967.

On top of being a coach, Jones started his 57-year career as a track referee and starter after graduating from SEMO, while he was a starter at the state meet for 25 years from 1976 to 2001. He has been an assistant referee and coordinator at state since 2002.

Last year in May, SEMO’s track and field team hosted the annual Ohio Valley Conference Outdoor Championships, where Jones was the meet referee.

Jones also served as a referee in high school football for 40 years (1964-2004) and had the chance to referee in four state championship games.

On top of his service to athletics, Jones was the Presiding Commissioner for Cape Girardeau County from 1995 to 2010. He was responsible for things like securing the funding for the Cape Girardeau Conservation Nature Center, building a new county justice center and sheriff’s department and was instrumental in recruiting the following businesses and industries that created over 1,500 new jobs: Procter and Gamble, Nordenia, BioKyowa, Buchheit’s of Jackson, Sears Grands, Kohl’s and NARS.