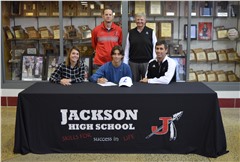 Both fathers and high school coaches are gratified when an athlete signs with a school to continue their playing career, but those two usually aren’t the same person.

This was the case last week when Jackson boys golfer Tanner Walton signed with John A. Logan as his father, who is the Jackson boys golf head coach, Zack Walton was there to share the moment.

“Not every kid gets to have their dad as a coach — it’s different,” Tanner said. “It’s always had it’s ups and downs.”

Tanner started golfing when he was eight-years-old and has also played soccer. Walton said he enjoys golf the most because of the individual challenge.

“I’m glad to see a little hard work has payed off for him,” Coach Walton said. He’s been playing golf for a long time and has been very passionate about it. [He’s] spent a lot of time with it, so it’ll be exciting to see how all of that hard work pays off at the next level.”

As a junior, Walton won his second-straight individual district championship, the first time in program history, and helped lead the boys team to a fourth-place finish at state. This was the first time since 2003 that the golf team qualified for state.

Walton was the only player to earn all-state honors as he placed in the top 15 by tying for ninth place with an overall score of 149.

“Every year he’s gotten a little bit better, and that’s boys,” Coach Walton said. “Every year we get a little bit bigger, a little stronger and we start hitting the ball a little further. One thing that’s stuck with him is his work ethic. In the summer time, he’s spending six to seven days a week on the golf course. When it’s winter, he doesn’t care — he’s out there.”

“We have good teams,” Tanner said. “[In golf], we have five guys who are able to come in and shoot some good scores and hold us in there. We just all around have a solid team.”

Tanner’s goal is to eventually play golf at the Division-I level, and his dad thought it would be best for him to begin his career at a two-year school before doing so.

Coach Walton said John A. Logan is a program that has players move on to four-year colleges since it competes in tournaments where Division-I coaches scout.

“It’s nice that it is in our back yard, so he’s not too far away from home yet,” Coach Walton said. “We looked at several [schools], but John A. Logan is one of the top ones if you play well, they will help you move on.”

Walton said he has been privileged to be able to coach Tanner his entire life and that he’s going to miss what has been a unique opportunity.

“Tanner has such a great personality, and he’s been easy to coach for the last several year for both soccer and golf,” Coach Walton said. “I couldn’t ask for a better child.”