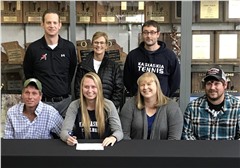 On Dec. 7, Jackson senior Larissa Hoffman proved that if someone has enough determination, they can accomplish just about anything.

This was the date that Hoffman signed a National Letter of Intent to continue her tennis career at Kaskaskia College. When Hoffman first joined the Jackson girls tennis team as a freshman, she didn’t think she had what it took to be able to play college tennis.

“I just kept pushing myself forward to want to [play college tennis],” Hoffman said. “I made it a goal to achieve.”

In Hoffman’s first year with the team she only played on junior varsity, and after that season her and a few other teammates were advised to take lessons in Paducah, Kentucky. She took that advice and traveled past the Mississippi River for eight to nine weeks each day after school to become the tennis player she is today.

Hoffman would spend two and a half hours at the facility each day. The first hour was spent working out while the final hour and a half was spent playing tennis.

During this time, Hoffman said she developed skills such as how to hit with more top spin, honing her hitting technique and focusing on her movement on the court.

Hoffman said one of the reasons why she decided to sign with Kaskaskia is because it’s a smaller campus, which reminded her of Jackson. She also said she knows a few people who attend the school already.

One goal Hoffman set for herself in her final season with Jackson was to reach sectionals and possibly state. She achieved one of these goals after taking third at districts to advance to the sectional meet.

Hoffman’s high school career came to an end at sectionals, and her Head Coach Linda Adams could tell she didn’t want her playing career to end.

“[Hoffman] is so passionate about the sport, and every year she did not want the season to end,” Coach Adams said. “A lot of the people by the end of the season are ready to move on and do something different. She’s put a lot of work into [tennis], and she just has so much fun out on the court.”

Hoffman said she plays tennis because she’s naturally a competitive person and enjoys the mental challenge of a singles match and the height advantage she has in doubles.

“Her sense on the court and her ability to place the ball and what shot to make according to her opponent’s weaknesses — she grew so much in having so much court sense,” Coach Adams said. “She was a very smart player [for us], and she didn’t give up.”

Another thing Adams learned about Hoffman is that she’s not the type of person to overlook an opportunity. This included Kaskaskia as well as the time Hoffman spent becoming a better tennis player.

Coach Adams said what she will miss the most about Hoffman is her eagerness to play as well as her leadership.

Hoffman said she will be studying education in college because she’s always enjoyed helping people. She’s also been a part of the A-Plus program, which helped her realize she enjoyed being in a classroom setting.

“My friends and family have helped me a lot through the whole journey of my life,” Hoffman said. “My family has put so much time and money into me to become a better person. My friends have pushed me to [play in college] and are really excited for me.”