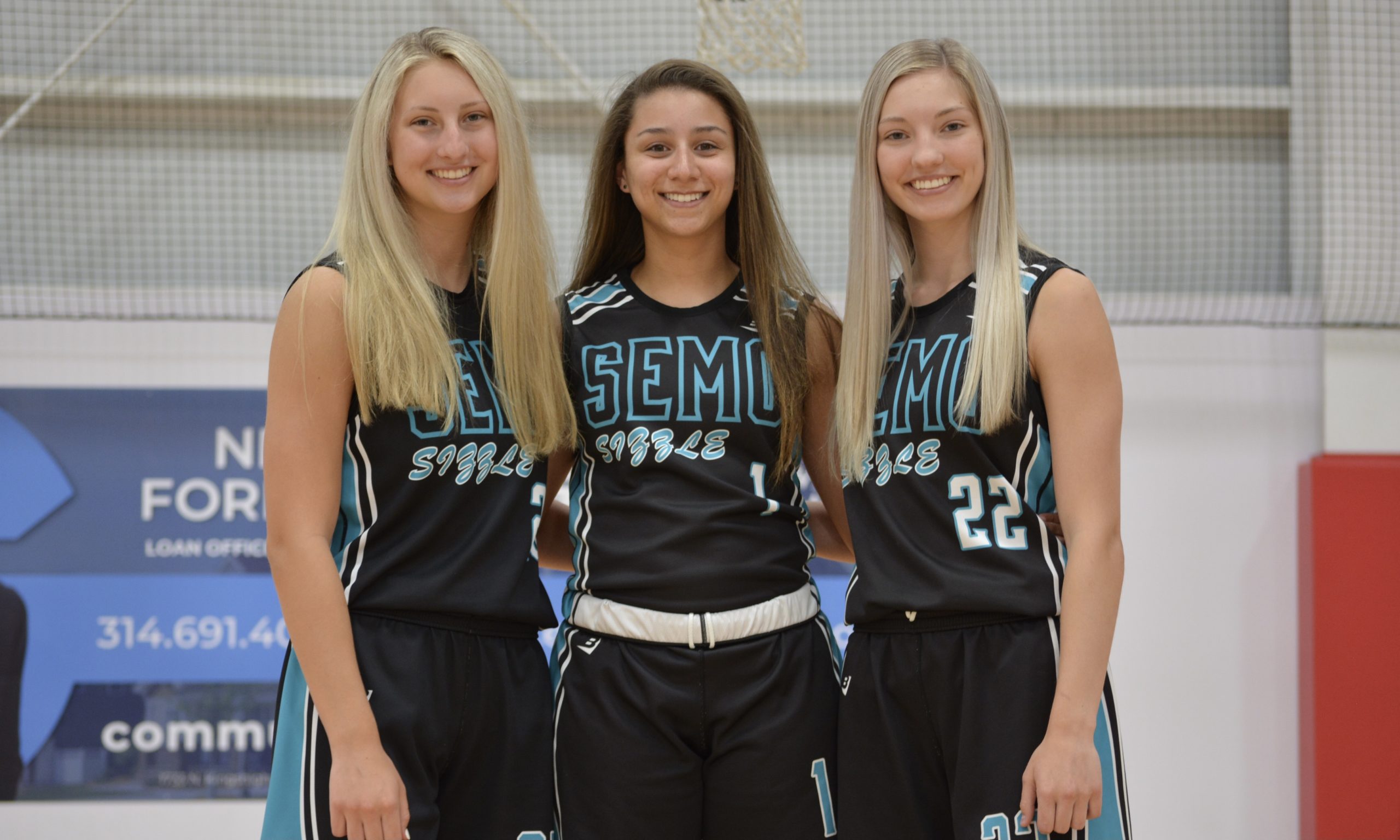 Notre Dame junior Tori Rubel (left), Jackson senior Jordyn “Jo” McClellan (middle) and Notre Dame senior Lexi Rubel (right) have played on SEMO Sizzle together since fifth grade. They have three more tournaments together as teammates this AAU season since Jo and Lexi won’t be on next year’s team because they will have graduated from high school. Photo by Jay Forness

Probably before they could even walk, Southeast Missouri high school basketball stars Lexi Rubel, Tori Rubel and Jordyn “Jo” McClellan have had a ball in their hands. Then, of course, when they could walk, they started playing a game that is not only going to pay for their college tuition, but it has also led the trio to form an unbreakable, sister-like bond all while spending countless hours practicing and playing for SEMO Sizzle.

SEMO Sizzle was created by Notre Dame sisters Lexi and Tori’s parents Matt and Michele Rubel, who were each 1,000-point scorers during their basketball careers at Notre Dame and Jackson, respectively. This was back when The Rubel Duo was in elementary school as Lexi, who is a senior, was a second grader and Tori, a junior, a first grader.

Lexi and Tori were on the team with their cousin Sydney Turner, who graduated from Saxony Lutheran this spring. Therefore, Lexi and Tori were actually playing up with and against third graders when the program began.

However, that didn’t prevent these sisters from having early success like when SEMO Sizzle won a championship in their first appearance at the Show-Me State Games. Lexi remembered playing in that tournament and said they “got killed” by the team they played again and beat for the title.

Currently, Tori is the second tallest player on SEMO Sizzle standing at 6-foot-1, but when Sizzle first began, she was actually the shortest.

“I remember being extremely smaller than everyone,” Tori laughed. “My mom has this photo where my head comes up to a girl’s upper body, and I’m trying to post up on her.

“I always felt really cool that I got to play with Lexi and play up. At our little rec leagues for Immaculate Conception, I would always want to play with her team, too. I look up to them.”

McClellan, who is now a senior at Jackson, didn’t start playing for SEMO Sizzle until she was in fifth grade. The first thing Jo remembers about joining Sizzle was being nervous because she didn’t know anybody. The Rubels not only made McClellan feel welcomed, but they also made her feel like she fit in with everyone.

“They made me not as nervous and tried to include me in everything,” McClellan recalled. “Them being so welcoming made me joining the team a lot easier.”

Even though Lexi and Tori already have two younger sisters, twins Brie and Kate, — who play on their own SEMO Sizzle team — Lexi said for the longest time they referred to Jo as “our little sister.”

Not only do Lexi and Tori love playing with McClellan so much that they would even join her at Jackson’s all-day camps, but they also have brought Jo along on trips like when the Rubels vacation to Kentucky Lake.

It was only a year or two after McClellan joined Sizzle that they all started taking it more seriously because they realized something special was on the horizon. The reason wasn’t just to become better basketball players, but it was mainly because of other teams forming in the program like Brie and Kate’s 2026 squad.

“When SEMO Sizzle started growing, I feel like we took it a lot more serious because it wasn’t just our team — there were and are now more teams,” Tori said. “We were the first team, so we were the example.”

Once SEMO Sizzle started growing, the 2022 team began traveling to larger tournaments further away from home like Run 4 Roses held in Louisville. They now primarily play in tournaments throughout the Midwest in other states like Illinois, Indiana and Tennessee for recruitment purposes.

In 2017, SEMO Sizzle took third in the AAU National Tournament hosted in Kingsport, Tennessee. To reach the final four, Sizzle defeated a team out of West Virginia by one point on a buzzer-beating 3-pointer.

With under 10 seconds to go, Lexi inbounded the ball and drove down the court. Once she went in the lane, Lexi kicked the ball out and shouted, “Shoot it!” to McClellan, who made the three as time expired.

Besides playing against some of the best competition the nation has to offer and in front of countless college coaches, these three enjoy playing out-of-state because of how much more time they get to spend together. This remains the case even when factoring in that they are around each other more than their other friends.

“Especially when we have basketball for the whole week,” Lexi joked.

Nonetheless, these three still do everything together along with their teammates when they aren’t playing in games as they will hang out at the hotel, eat and shop. Last year when they played at the Nike Tournament of Champions in Indianapolis, their hotel room was connected to one of the larger malls.

Another way these players have fun spending time together is by playing hide-and-seek in the hotels since most of the ones they stay at are rather big, which makes for good hiding spots, Tori noted.

These tournaments are also a great way for each of them to get to know everyone on the team better, especially since faces often change from season-to-season when it comes to AAU travel teams.

“This year we had a whole new team almost,” Tori explained. “The first tournament we played in was really nice because we got to know them a lot more than just like at practice when you basically can’t even talk. We had time to learn about them.”

In SEMO Sizzle 2022’s last three tournaments, the team finished with a combined record of 11-2 while taking first in the Prep Girls Hoops Derby City Duel (4-0) in May at Louisville. At the PGH Dynasty Region Finals on Memorial Day Weekend in St. Louis, Sizzle went 3-1 overall and ended the tournament with a win over NBA star Trae Young’s AAU team out of Oklahoma.

In SEMO Sizzle’s 54-51 victory over Team Trae Young, Lexi scored a game-high 16 points and hit three 3-pointers while recording four assists, three rebounds and two steals. Lexi also finished 66.7% from the field. McClellan paced Lexi with 14 points of her own and knocked down two triples, and she also went 4-of-5 from the free-throw line.

Jo finished with the most made threes in the PGH Dynasty Region Finals for SEMO Sizzle at seven, while Tori paced her with six as she hit three treys and finished 60% from beyond the arc in Sizzle’s first game.

In early May, SEMO finished 3-1 at The Classic held in Louisville, where it advanced to the platinum semifinals. Sizzle fell to eventual champions Team Huddle PHX out of Arizona, which beat NBA star Bradley Beal’s team out of St. Louis in the quarterfinal round.

To reach the platinum bracket of The Classic, SEMO Sizzle won both pool play games by at least 21 points, one of which Tori garnered national recognition for after making four 3-pointers in a single game.

Tori finished with 17 points on top of her four threes, and this led World Exposure Report (16.7 thousand followers on Twitter) to tab her performance as one of the top five in pool play.

This high school season, Notre Dame and Jackson both won district championships as Lexi, Tori and McClellan each earned all-district and all-conference honors. All three players were also named to the annual Holiday Classic All-Tournament Team, which the Bulldogs won for the second-straight year with a win over the Indians.

Notre Dame hasn’t lost to Jackson since Tori Rubel has been in high school (6-0), and the Bulldogs have also won back-to-back SEMO Conference Tournament championships and a third-consecutive district title with Tori.

On top of being named all-conference and all-district for the third time, Lexi was also selected to the all-state team for the second year in a row. Lexi averaged 16.3 points, 9.3 rebounds, 3.5 assists and 2.4 steals per game this winter — all team highs.

Lexi also eclipsed 1,000 career points and is on pace to break several of Notre Dame’s all-time records, including scoring, rebounding, assists and steals.

As a sophomore, Tori Rubel finished as the Bulldogs second-leading scorer with nine points per game, while coming down with 4.3 boards and 1.4 steals a game. Tori also shot 56% from the field and 41.4% from 3-point range. She was the only player on Notre Dame besides Lexi to produce 20 or more points in a single game with a career-high 22.

As for McClellan, she finished with 12.8 points per game and made a team-high 58 threes while shooting 40.6% from beyond the arc.

Lexi and McClellan each field Division-I offers to play collegiately. Lexi has offers from Austin Peay, Southeast Missouri State and Southern Illinois, while Jo’s offer is from Murray State.

Even though Tori doesn’t have an offer yet, she recently made two unofficial visits to Bradley and Southern Illinois. Several D-I schools plan on watching Tori and SEMO Sizzle at Run 4 Roses next week, where there will be over 1,500 teams and 1,000 college scouts in attendance.

“It’s really cool because you’ll be playing, and you’ll just look down and see four college coaches watching you,” Lexi said. “I don’t get super nervous about it. I just think it’s cool.”

Right after Run 4 Roses, Sizzle will play in Battle in the Boro that weekend in Louisville. The last AAU tournament these three play in together will be the Nike TOC Summer Finale in Iowa July 23-25. Tori will return to SEMO Sizzle next season, but Lexi and Jo won’t since they will have graduated.