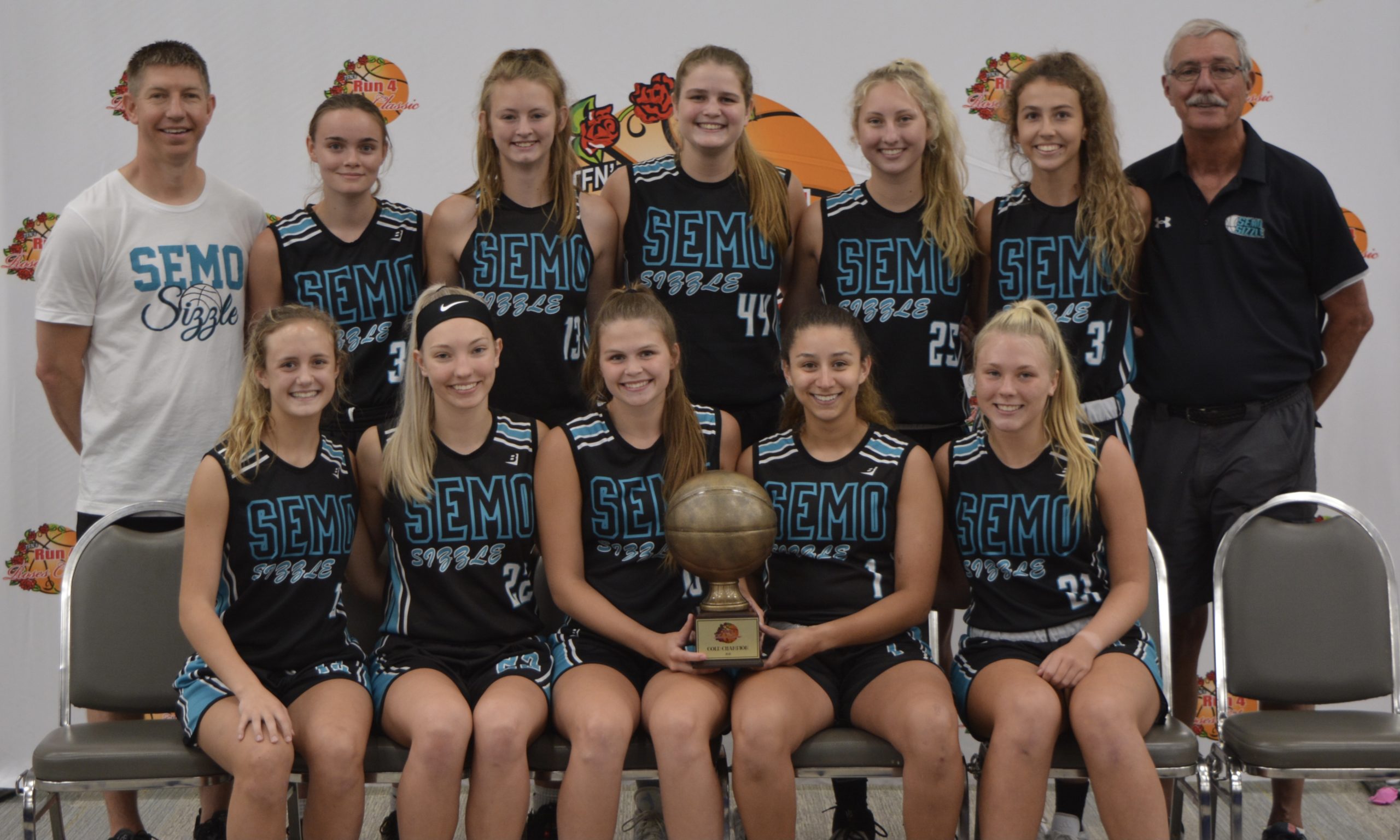 Over the course of seven days, the SEMO Sizzle 2022 girls basketball team competed in Run 4 Roses (July 5-8) and Battle in the Boro (July 10-12), which were both held in Louisville, Kentucky.

SEMO Sizzle claimed not one but two championships in the span and finished with a combined record of 10-1 overall, and the team’s lone loss was only by one point.

The first title for SEMO Sizzle came in Run 4 Roses as it ended up playing for the gold championship after going 2-1 in pool play. This was where Sizzle lost their only game in Louisville to Wisconsin Blaze Elite by a score of 37-36.

SEMO Sizzle didn’t drop another game after that and went on to defeat Team Stringrays out of Hawaii, 43-38, in a title game that went into double overtime. This was only possible because of the late-game heroics by Notre Dame’s 2022 guard Lexi Rubel, who hit a buzzer-beating 3-pointer to send the championship into overtime.

Rubel finished with a game-high 19 points and also had six rebounds in the win over Team Stringrays, and she also knocked down multiple free throws in overtime to secure the win (finished 6-for-7 at the charity stripe).

Pacing Rubel in scoring for the title game was 2022 forward/center Kamryn Winch out of North County, who recorded a double-double with 11 points and 15 rebounds. Finishing third in scoring was Notre Dame 2023 guard/forward Tori Rubel, who had six points and four rebounds.

Tori Rubel had a standout performance in Sizzle’s 56-49 win over current WNBA player Kia Nurse’s team in the championship semifinals, where she scored 15 points and hit a triple on top of going 4-of-4 at the free-throw line. Tori showed off her ability to score in the mid range and had nice attacks of the rim throughout the game.

The Rubel Duo combined for 32 points in the victory against Kia Nurse 17 Regional as Lexi Rubel scored two more points than Tori for a team-high 17. Lexi also knocked down two threes and had three steals.

Jackson 2022 guard Jordyn “Jo” McClellan’s top performance at Run 4 Roses was in SEMO Sizzle’s 47-29 win over CT Supreme Elite in pool play. McClellan made three of her four 3-point attempts, and she also scored 10 points in a 48-23 win over MT Ducks Elite Platinum.

Tori Rubel and McClellan tied for the most 3-pointers in both tournaments combined with 10. Tori went on to make six triples in the Battle in the Boro’s American Pharaoh Bracket, which SEMO Sizzle won by defeating all but one opponent by double figures.

SEMO Sizzle won the Battle in the Boro American Pharaoh Championship with a 56-36 victory over hometown squad Louisville Lady Dream, where Sizzle made eight threes. Tori Rubel hit one as Conkright and South Iron 2023 guard Maddie Ayers made two apiece.

Lexi Rubel, who also hit a 3-pointer in that title game, scored a team-high 17 points while recording five rebounds and three assists. Lexi also finished 10-of-11 from the free-throw line.

In the Battle in the Boro Sweet 16, Tori Rubel swished multiple threes to finish with 12 points and also had three rebounds during Sizzle’s 51-32 win against TN Flight Select. Lexi Rubel produced one more point than Tori at 13 and also finished 8-of-8 at the free-throw line.

Lexi Rubel proved to be one of the best free-throw shooters in the Midwest as she made 90.9% of her shots from the charity stripe by finishing 40-of-44 at Battle in the Boro. Lexi also recorded two double-doubles and had double-digit scoring outputs in each game.

The highest scoring total for Lexi Rubel came in SEMO Sizzle’s 51-41 win over TN Flight Trotters Armes in the Final Four. Rubel finished with 18 points and hauled in 10 boards along with recording three assists and two steals.

SEMO Sizzle’s closest game was when it faced off against SLAAM Reighard and came away with a 61-55 victory as Winch recorded another double-double. She did so with 18 points and 12 rebounds as Lexi Rubel paced her in both categories with 13 points and six boards. Lexi also finished with a team-high six assists and scored 11 of her 13 points at the free-throw line.

After winning the American Pharaoh Bracket Championship, Lexi Rubel was named the Battle in the Boro Tournament MVP. She averaged 14.6 points, eight rebounds and four assists per game while going 40-of-44 (90.9%) at the free-throw line through five contests. She also made five 3-pointers.

Lexi Rubel, of course, was named to the Battle in the Boro’s American Pharaoh All-Tournament Team as was Tori Rubel, who made at least one three each game.

Both of these tournaments were crucial for recruitment as this month is the first time since the coronavirus pandemic began that college coaches have been allowed to scout players in person. Multiple college coaches were in attendance for each of SEMO Sizzle’s games.

The last tournament for SEMO Sizzle will be the Nike Tournament of Champions Summer Finale July 23-25 in Des Moines, Iowa.