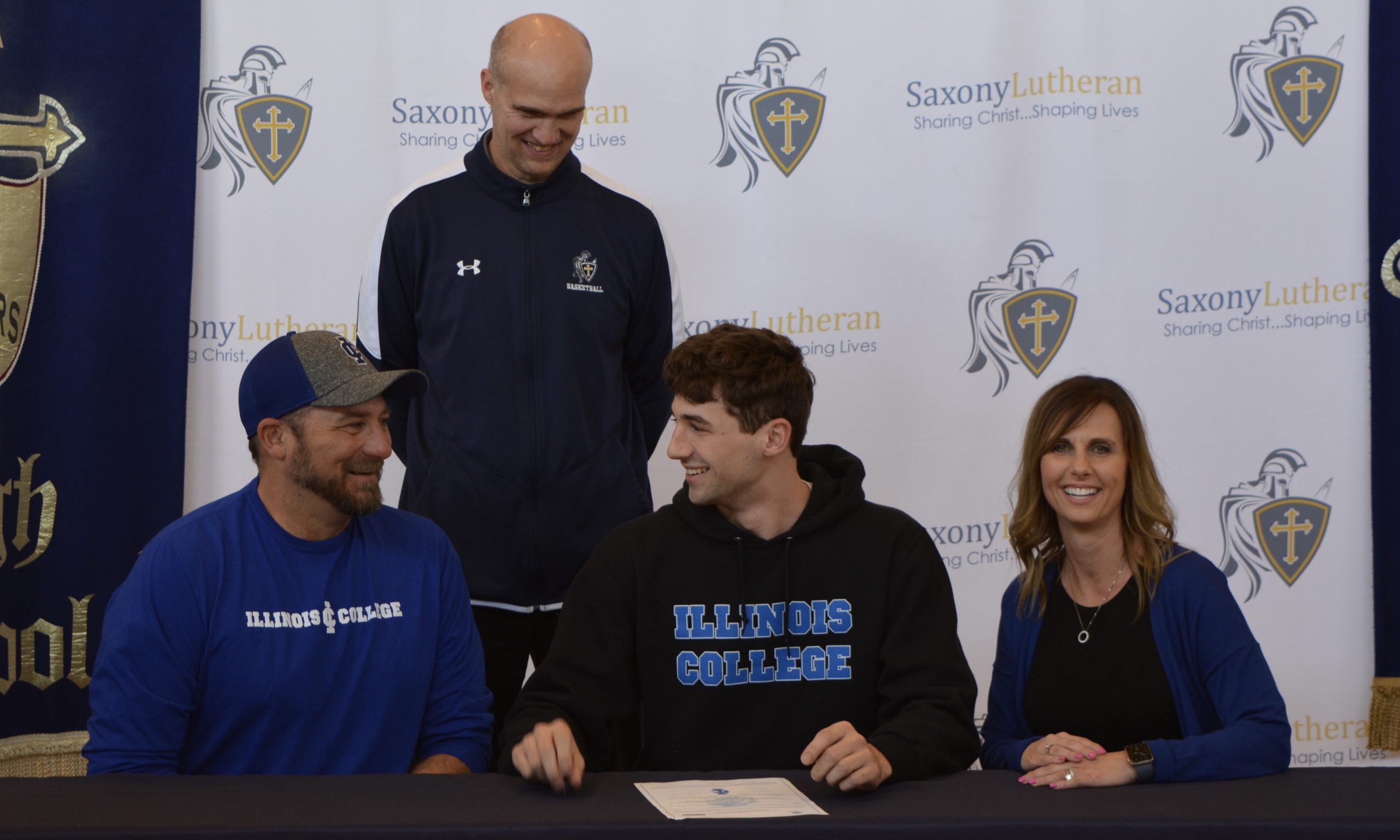 Ever since he was in elementary school, Saxony Lutheran senior Wilson Lodge has dreamed about playing college basketball one day. Lodge said he picked up a basketball the very first moment he could, which has led him to fulfil his longtime dream.

Wilson officially signed with Illinois College last week after verbally committed to play there before his final season at Saxony. Illinois contacted Lodge following his final season of AAU basketball with the Illinois Bears in August.

“Mainly all of the hard work that I’ve done throughout my elementary years all the way through high school finally paid off in the end,” Lodge said. “I was really excited when Illinois College contacted me because I know a couple people who already go there.”

Upon Lodge’s on-campus visit, he fell in love with the campus and jelled with his now future teammates from the get-go. This is when he knew Illinois College was indeed his future home.

Lodge is originally from Illinois, but he decided to move to Missouri his junior year. This was because the high school he attended in Illinois wasn’t going to open back up that year due to the coronavirus pandemic.

Like his visit to Illinois College, Wilson said his visit to Saxony was very much the same. The staff at Saxony assured Lodge that there would be school every day and that they would push for a full basketball season.

Lodge said playing high school basketball in Missouri has helped his game due to the fact most teams play a zone defense rather than man-to-man. This has helped Lodge in learning how to create shots for himself rather than have an open look.

“Playing basketball in Missouri was my first time ever seeing a 1-3-1 zone or anything like that,” Lodge said. “In Illinois it’s all man-to-man, so it was mainly me sitting in the post, catch the ball, dribble and shoot. In Missouri, you have to go to this spot and try to get yourself open and make more cuts. It’s a lot more intense.”

As a Crusader, Lodge is a two-time Class 3 District 2 All-District honoree and helped Saxony reach back-to-back district championship games. Even though Lodge and the Crusaders were unable to win a district title, he still helped a program that had only won 20 games the past three seasons win 19 contests this year.

“To have almost 20 wins this season was amazing. Last year, we came up a little bit short, and this year we were a little bit closer,” Lodge said. “It would’ve been nice to get that district title, but what are you going to do.

“I liked how the team grew together this season. A lot of people had to step up and fill really big spots — I’m really proud of a lot of my teammates for being able to do that. … We can look back at our wins more than our losses, and it’s a lot more fun that way.”

What Lodge enjoys the most about basketball is the hard work that comes with it. Wilson also said he sees the sport as an escape for him because he’s in control, and that he’s doing something that he loves rather than being told what to do.

In order to be successful at basketball, Lodge said players just can’t show up and say, “I think I’m going to play today and then take a couple weeks off.”

“I probably put 15 hours per week into basketball,” Lodge said. “Even on my days off, I would try to at least dribble for a while or something.”

Lodge primarily played in the post for Saxony over the course of his career, but he will likely be a wing in college, which is the position he played with the Illinois Bears during his AAU days. Wilson had played with the Bears ever since he was a freshman over the past three summers.

“In AAU, I have to expand myself and that’s why you saw my 3-point percentages go up and everything,” Lodge said. “I had to play at wing to compete at that level. It helped me defensively as well because my feet had to get quicker, and I had to get stronger. I also had to learn how to jump higher, so really AAU took the skills I already had and made me expand them to a different point.”

Heading into college basketball, Lodge said he is focusing on gaining weight in order to be stronger and jump higher to elevate himself in the air and stay there longer than he can now. This will help Wilson be able to finish better as well as have more success with his jump shot.

In the classroom, Lodge will study human biology because he wants to be a chiropractor one day. Wilson — a former junior rodeo star and owner of a horse and three dogs — first wanted to be a veterinarian, but he realized he couldn’t handle performing surgeries.

Bottom line is, Lodge is interested in the medical field and wants to help others as much as he can.