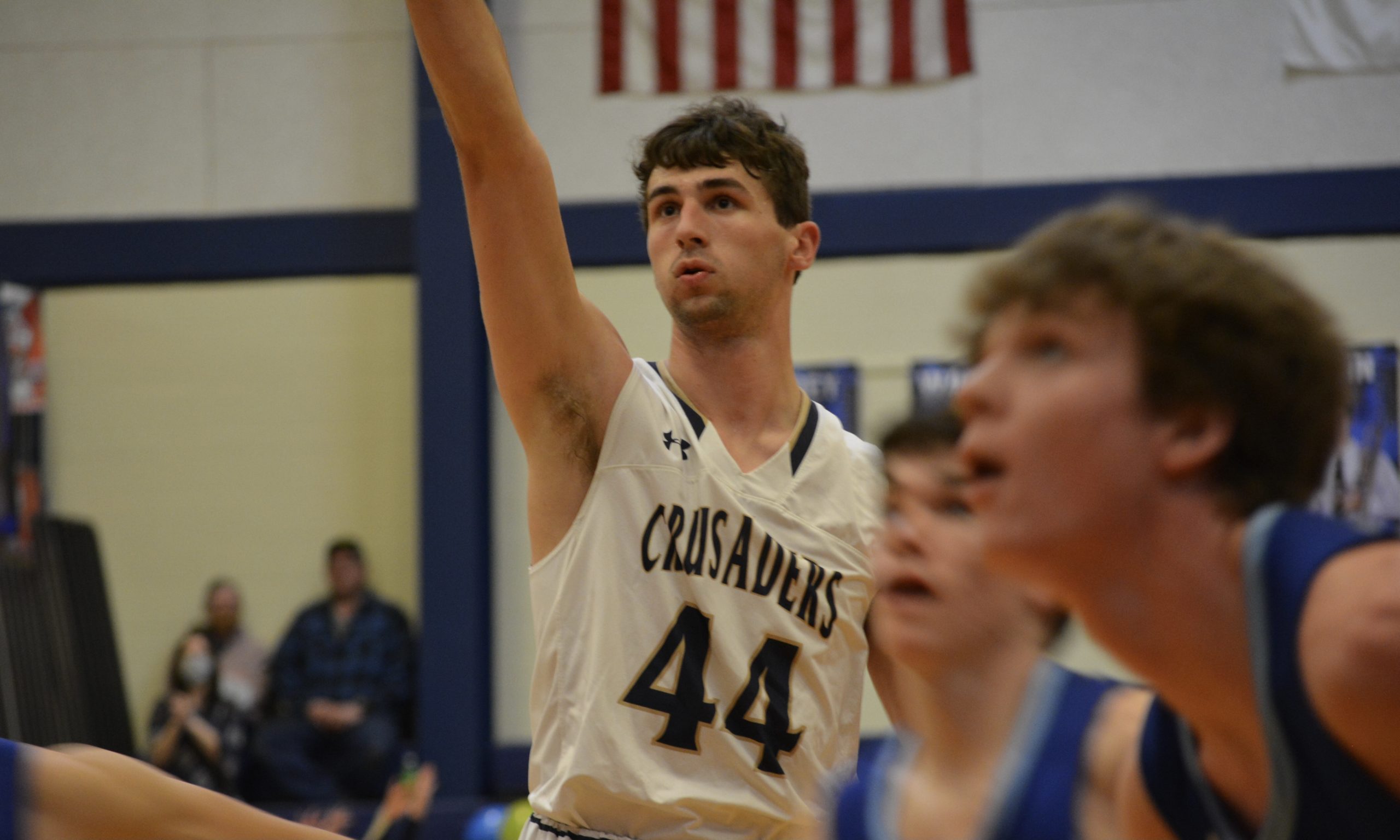 The Saxony Lutheran boys basketball program is finally proving to be moving in the right direction after the Crusaders picked up their 11th win on Homecoming last Friday night, which happened to be rather historic.

Not only did the victory secure Saxony its most wins since 2017-18 when the Crusaders finished 22-8 overall and won their last district championship, but it was also the team’s first win over rival Notre Dame — ever.

Saxony came out on top over Notre Dame 15 points at 61-46 for the Crusaders first win in 22 years over the Bulldogs to avenge last season’s 83-31 loss.

“Saxony has only been around for 22 years, so I don’t know how many times they’ve actually played Notre Dame, but I know they’ve played them quite a few times,” Saxony head coach Justin Callahan said. “Notre Dame has had some really good teams — there are a lot of teams that could say, ‘We haven’t beat Notre Dame.’

“There are a lot of happy people right now, and our Principal Mark Ruark was telling me how his son Nathan played on the 2018 team. They were watching the livestream, and Nathan texted Mark, ‘Tell Coach Callahan and the boys thank you,’ because they never beat Notre Dame. It’s a nice win for the program.”

Not one but three Crusaders reached double figures on the historic night as senior forward Wilson Lodge produced a game-high 15 points. Also scoring in double digits was senior guard Will Eldridge and sophomore forward Luke Eggemeyer, who combined for 25 points with 13 and 12 as both hit two 3-pointers, respectively.

“This year the difference was Will Eldridge coming out and knocking down threes early on for us and getting us going,” Coach Callahan said. “When somebody starts making shots, the other kids just kind of feed off it. Our energy level and confidence raises, and we just played like we’re capable of playing. It was Homecoming night, so it was exciting and the kids stepped up and played well.”

Lodge only had three points in the first three quarters of play until Saxony started picking apart the Bulldogs half-court pressure defense. This allowed Lodge to make open trips down the lane for easy buckets as he produced 12 points in the fourth and final quarter.

Another key player for Saxony’s offense was sophomore guard John Hartmann as he scored all nine of his points and hit a three in the second quarter. Like Lodge and Hartmann, Eldridge also scored a majority of his points in a single quarter when he recorded eight in the first eight minutes.

“When we’re knocking down shots and shooting well, we can be pretty good. There’s been games where we haven’t done that and haven’t done so well,” Callahan said. “Will really got us going, and then Lodge had that big fourth quarter. Eggemeyer stepped up and hit two threes there in the third quarter.

“Against their press, Luke beat their press and hit one in the corner after one pass. Generally, I’m not a big fan of that, but he had just made one so I thought, ‘Go ahead.’ He did, and he made it, so that was good.”

Defensively, the Crusaders zone kept Notre Dame’s offensive attack outside of the painted area for the most part. This meant the Bulldogs tried to live or die at the 3-point line, where they scored nearly half of their 46 points with seven threes.

Hitting a team-high three triples for Notre Dame was senior Drew Vandeven, but those were his only points of the night as he had several misses. The only player for the Bulldogs to have double-digit points was fellow senior Quin Hunter as he finished with 12.

Outside of Hunter and Vandeven, only two more players made more than one field goal for Notre Dame: freshman forward Will Henry Steward (six points) and junior guard Cole Bruenderman (five points).

Saxony has eight regular-season games remaining until the Class 3 District 2 Tournament, which is slated to begin in late February. The Crusaders reached the title game last year, but they fell to Charleston, 68-31, which is now in District 1.

“I knew coming in this year we were going to be better — no doubt,” Coach Callahan said. “We now have the most wins since 2018, which is nice because we have a lot of season left. Hopefully we can keep improving on that. These next two games are big because they’re probably going to determine where we’re seeded.”