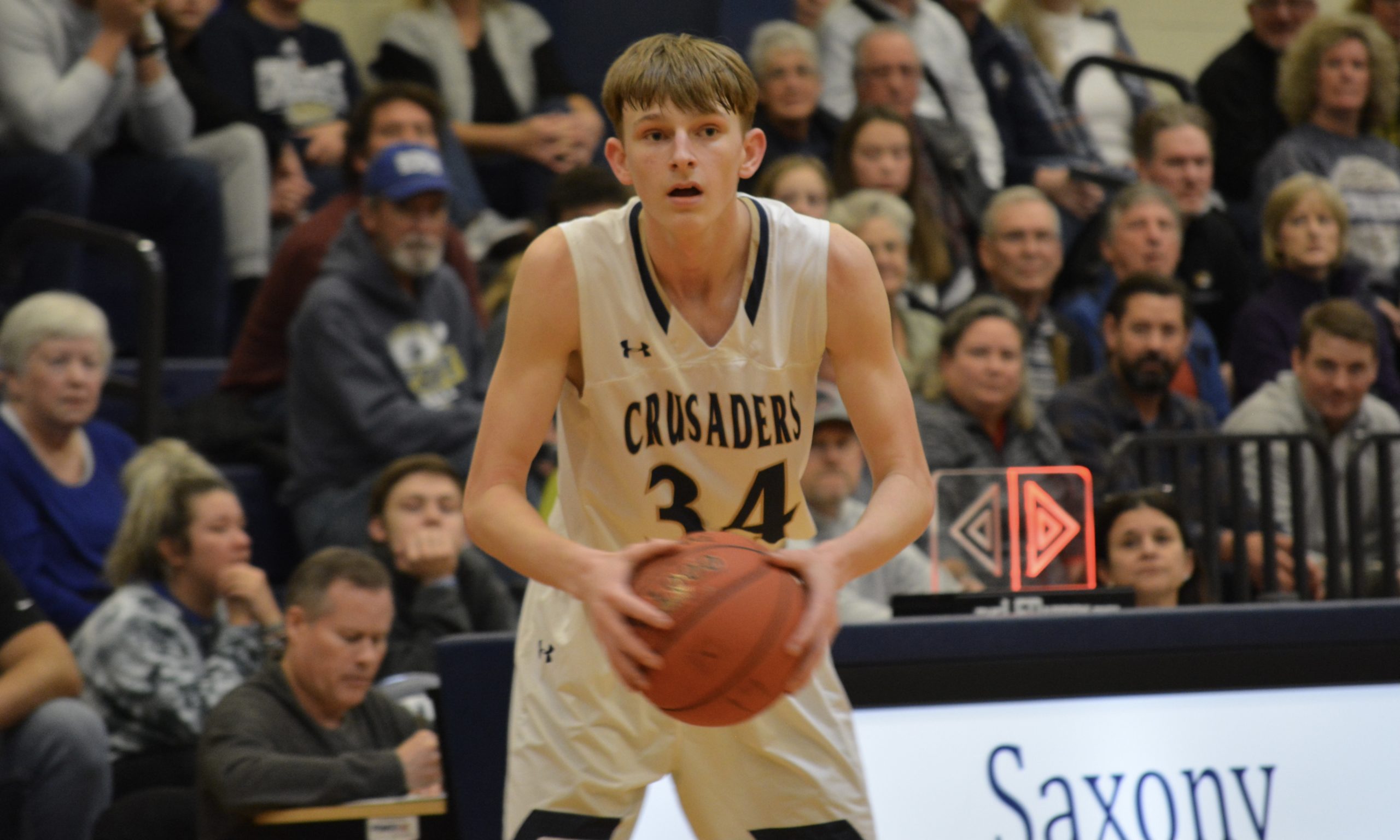 When Justin Callahan took over as the Saxony Lutheran boys basketball team’s head coach three seasons ago, he had never suffered a losing season while being at the helm of a program.

The Crusaders had only won two games the year before Coach Callahan was hired, but he was still able to lead Saxony to a 10-17 finish in his first year despite it being Callahan’s first losing season.

Fast forward to two years later, Saxony has won its most games since the 2017-18 season by finishing the regular season at 18-7 overall. The Crusaders rightfully earned the No. 1 seed in this year’s Class 3 District 2 Tournament, and they are hoping to win it all for the first time in four years.

“I’m pretty proud of these guys. I don’t have to be here — I’m retired from public education,” Coach Callahan laughed. “I would not come to this school if I didn’t enjoy it tremendously. I enjoy it so much because of these kids. These guys come out and try to do what I ask them to do. They listen to me, and they’re just good, hard working kids.”

While Saxony usually receives contributions in the scoring column from multiple players, the Crusaders have what one could call a “Big Three” made up by senior forward Wilson Lodge (Illinois College commit), senior guard Will Eldridge and sophomore forward Luke Eggemeyer.

“One of them generally is doing something real productive for us,” Coach Callahan said. “Some of that depends on what the other team is doing. If we’re against a zone, we’re moving the ball on the outside, which is where Will gets the 3-pointers going.

“It really just depends on what the other team is doing to us, and where we’re looking to go with the ball.”

The three usually are Saxony’s top-three scorers night in and night out, while the leading scorer differentiates. However, the hot hand as of late consistently has been Eggemeyer, who averaged 17.3 points per game for the Crusaders in their three contests last week.

“At 6-foot-5, Luke can really play any spot on the floor, and he has at times played point guard,” Coach Callahan said. “When the other team is putting a ton of pressure on our point guards — no problem. We can just give it to Luke, and he can bring it up.

“He’s a really good, solid basketball player, and he’s only going to get better and better. He needs a little bit more weight on him and strength, but he’s going to be pretty special the next couple of years — he already is.”

Consequently, the Division-III commit Lodge also averaged 17.3 points per game last week as he entered the season as Saxony’s only returning all-district selection from last winter. He put up a game-high 21 points in a 61-58 loss to one-loss Bernie (23-1) to finish the regular season last Friday night.

“All year long if we’ve needed a bucket, we’ll call a play to isolate Lodge down in the block and get him posted him up,” Coach Callahan said. “Down the stretch against Bernie, Wilson really stepped up and hit a big three.”

Pruitt finished right behind Eldridge’s average last week with eight points per contest as he put up 12 in a 73-35 win over St. Paul Lutheran on Valentine’s Day. He followed that up with seven points versus Twin Rivers and five against Bernie. Three of Pruitt’s points versus Bernie came from beyond the arc in a crucial moment during the fourth quarter for the Crusaders to nearly upset the Mules.

“I told him, ‘Hit it!’ Logan’s 3-point percentage is not great, and that’s not his natural thing,” Callahan said. “We shoot threes everyday — everybody does. He stepped up and hit it, which is great because he missed one. A lot of times you miss that one and you start getting shaky, but he responded by coming back and hitting that one.”

Zoellner also had a big game scoring wise versus St. Paul with eight points of his own, while Wade Eggemeyer scored six over Twin Rivers as Hartmann produced five against Bernie.

After falling in the Chester Invitational Tournament Championship on Jan. 15, Saxony rallied off eight-straight wins before falling to Bernie. One of those wins was over fellow Class 3 District 2 opponent and No. 2 seed Kelly (18-8), which the Crusaders beat 51-48 Jan. 25.

Saxony took on No. 5 seed Scott City (13-13) in the district semifinals, while the Hawks faced No. 3 Woodland (15-8) in their respective semifinal. The district championship game will be played tomorrow night at Chaffee.

When asked what it’s going to take for Saxony to win its first district title in four seasons, Callahan used one phrase: tremendous effort.

“Scott City will be gunning for us. We were the sixth seed last year, and we beat the second and third seed last year and lost to the first seed,” Coach Callahan said. “They are in that spot we were last year and are saying, ‘We have a chance for redemption.’ We have got to come out with intensity, play hard, focus and respect who we play.”