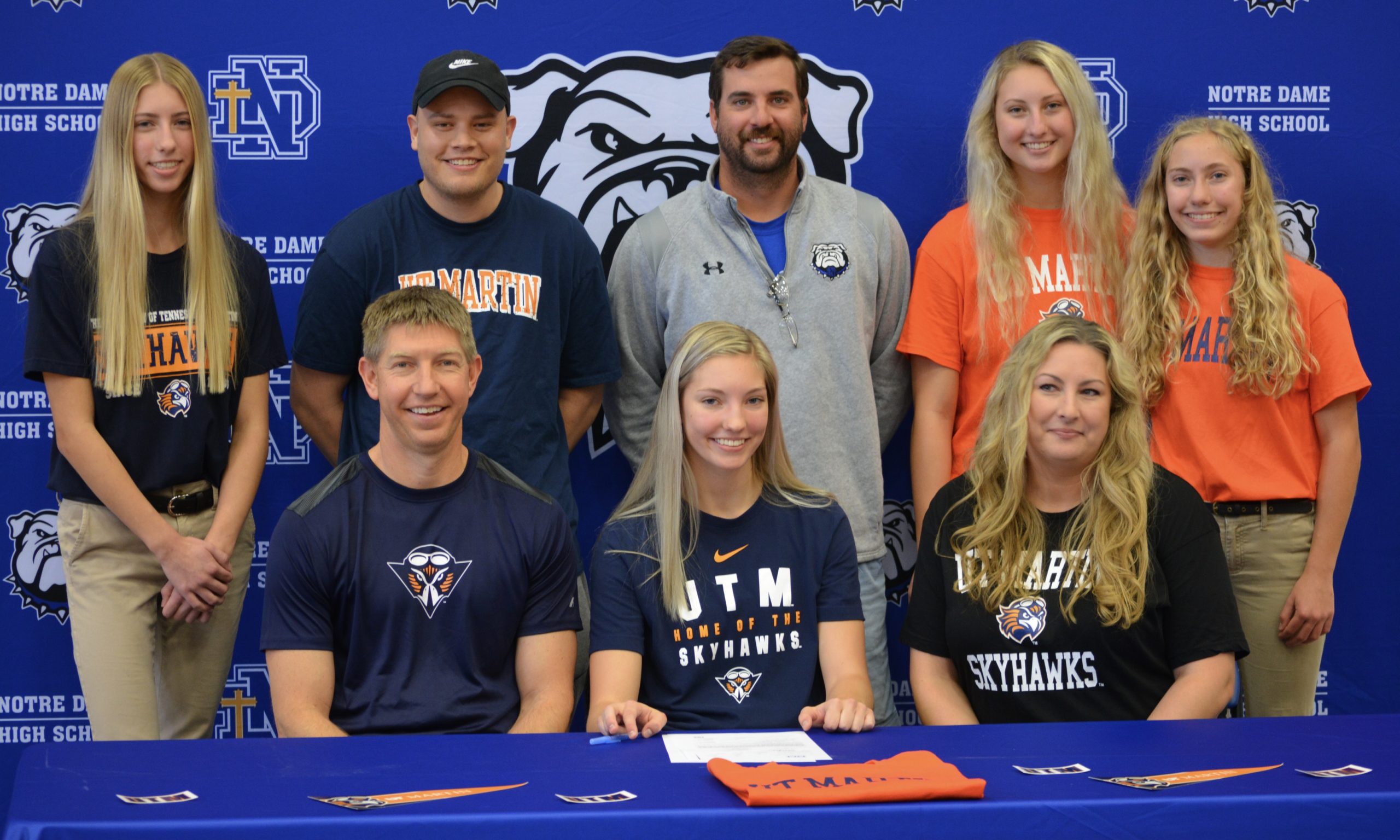 Last Wednesday was nothing short of exciting at Notre Dame as more than 100 people gathered at Jerry Grim Court for a signing that had been 18 years in the making.

The sport has always been a part of Rubel’s life as she’s seen pictures of herself as a young child attending her aunt’s Ashley Millham and Lisa Nice’s college basketball games when they played for Central Missouri. Rubel never saw her other aunt, Christa Turner, play collegiately, but she suited up for New Mexico State and then transferred to play at Mizzou to be closer to home. 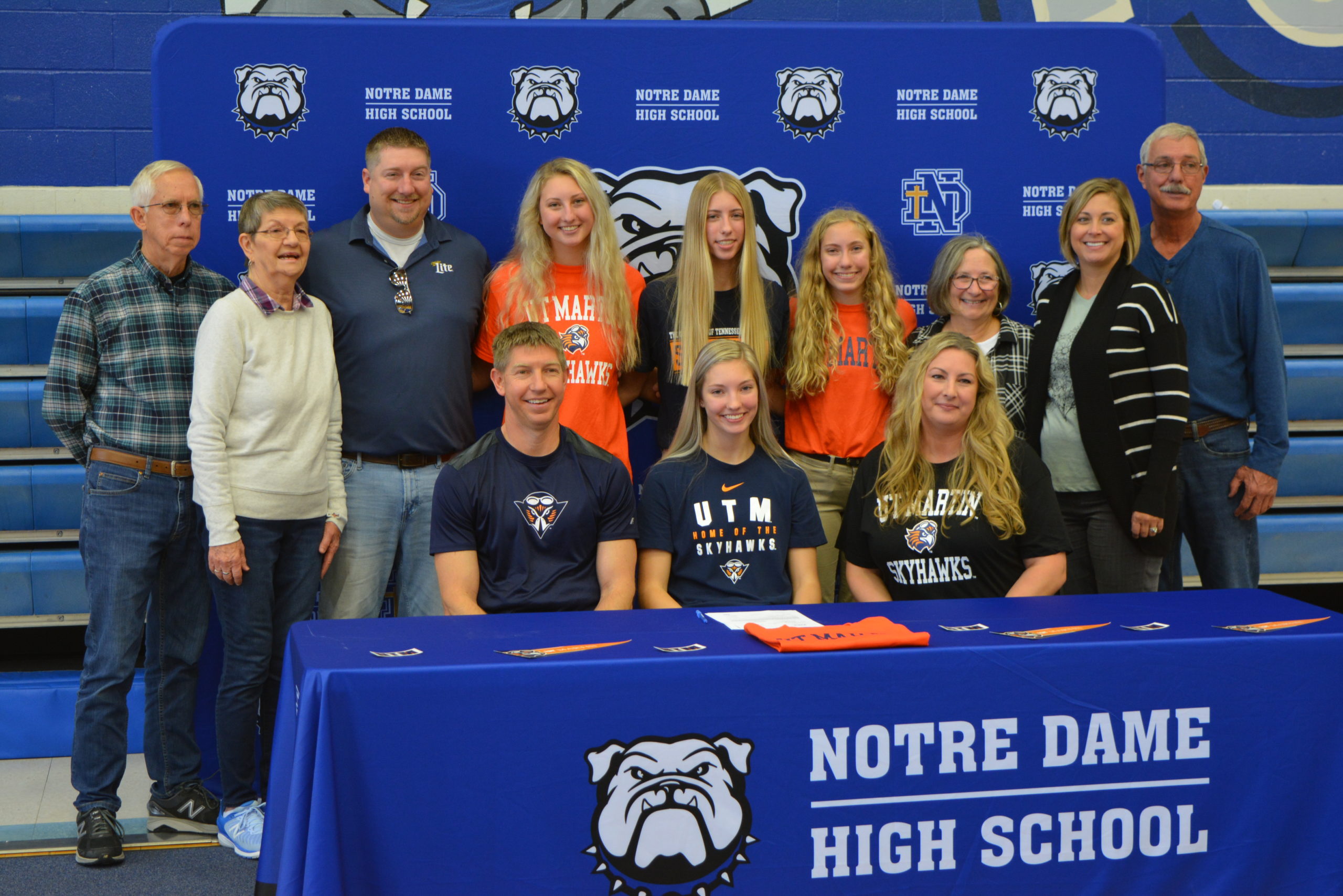 Lexi Rubel poses with all of her family members who were able to attend Rubel’s signing day.

“It’s really exciting to carry on this tradition. It’s exciting to take on that next step and know that I’m doing it for them almost,” Rubel said. “They did it and now I can experience what they experienced.”

Like Lexi, her aunts Ashley and Lisa both played high school basketball at Notre Dame and even won the program’s lone state championship in 2002.

Seeing those accomplishments and records while attending Notre Dame has motivated Rubel to break them. Lexi is on pace to do so as she became the 12th member of the program’s 1,000-point club last winter and only needs 613 to be the Bulldogs top all-time scorer.

“To see all the records they have here — my goal has been to beat those records,” Lexi said. “They’re always talking to me about like, ‘I want you to get the record.’ It’s great to see that and have them influence me.”

Without a single, solitary doubt, the other former college basketball players in Rubel’s family had a major influence and impact on her career as well. In fact, Lexi’s parents created an AAU basketball program for Rubel and her younger sister Tori to play in — SEMO Sizzle. 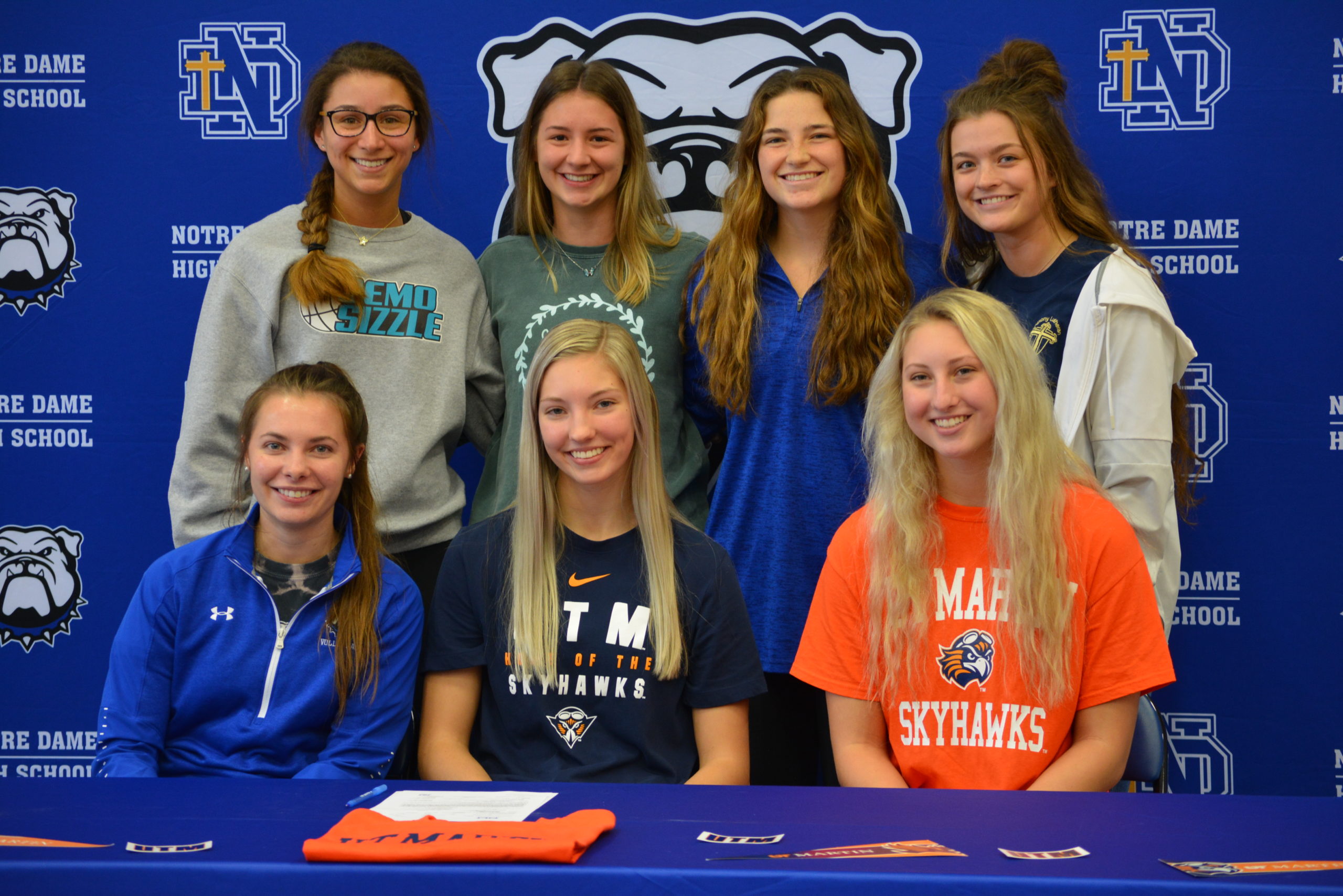 Like Lexi, Tori received an offer to play basketball at UT Martin as well, but her recruitment is still open as several schools are still after her. Not only for Lexi and Tori, but SEMO Sizzle has opened doors for many players who have come through the program to be seen by college coaches in hopes of playing at the next level.

“It’s really exciting to know I was one of the founders of SEMO Sizzle,” Rubel said. “It started because of me and my family.”

Lexi and Tori’s younger twin sisters, Brie and Kate, are currently reaping the benefits of SEMO Sizzle as their 2026 team was ranked as one of the top 25 squads in the nation by GURLS Ball following the summer season.

Rubel said she and her sisters have been able to form their own special bond through basketball with how much time they each want to spend focusing on the sport. 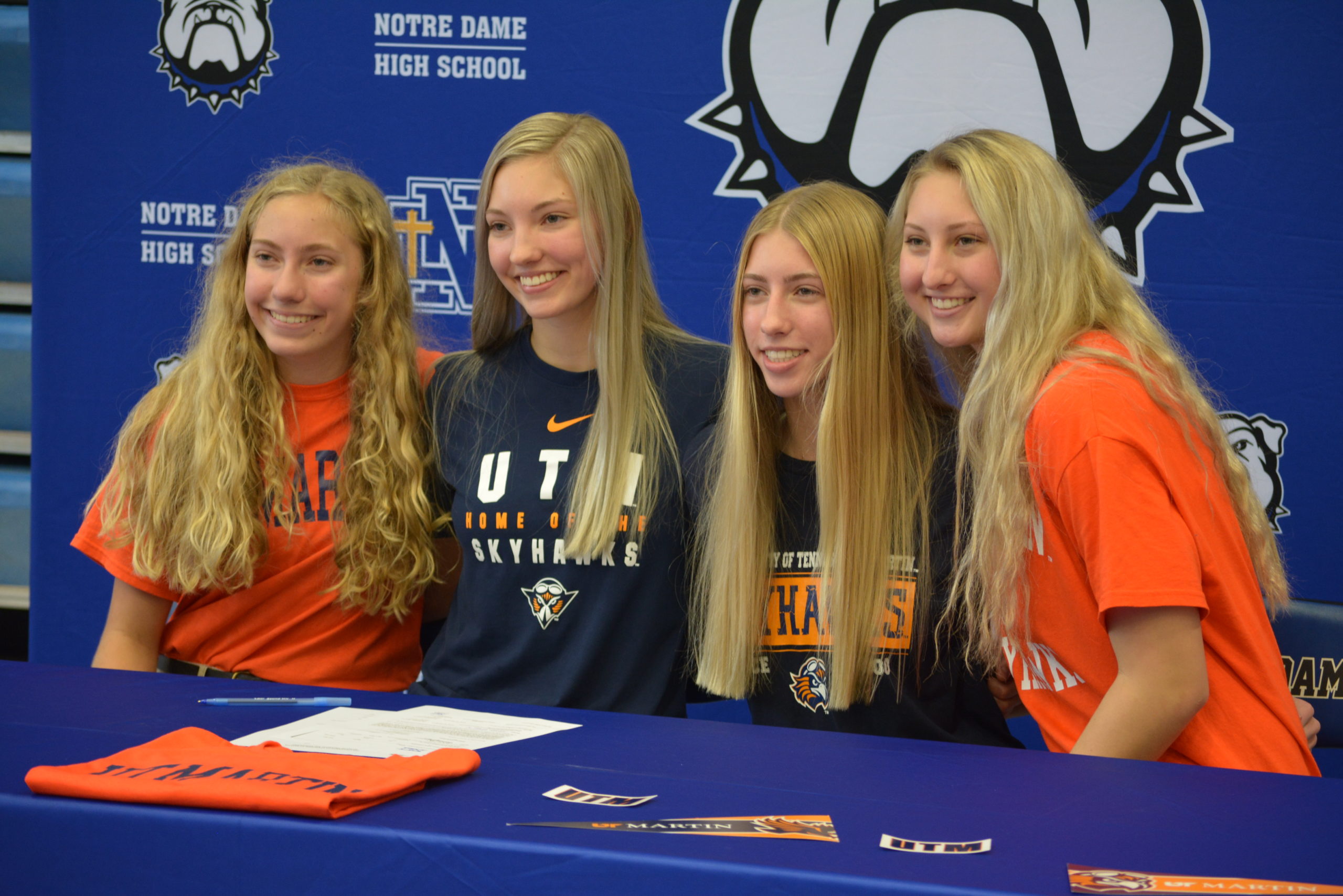 “I just feel like there’s always at least one of them who if I want to go out and shoot or something, they’ll definitely want to come,” Rubel said. “Or they’ll always ask me, ‘Can you take me to the gym today or drive me here?’”

Lexi, who is also on pace to become Notre Dame’s all-time leader in rebounds, assists and steals, credits her growth as a player to her parents. They were both 1,000-point scorers in high school as Matt played for Notre Dame while Michele was at Jackson.

“They really helped me form my work ethic. When I first started playing in elementary school, my dad was my coach,” Rubel said. “Ever since then, he’s been my coach through grade school, high school and travel ball.

“Then my mom has always been the behind-the-scenes person keeping stats and taking pictures. I can’t remember a time they weren’t at my games or weren’t telling me something to do.” 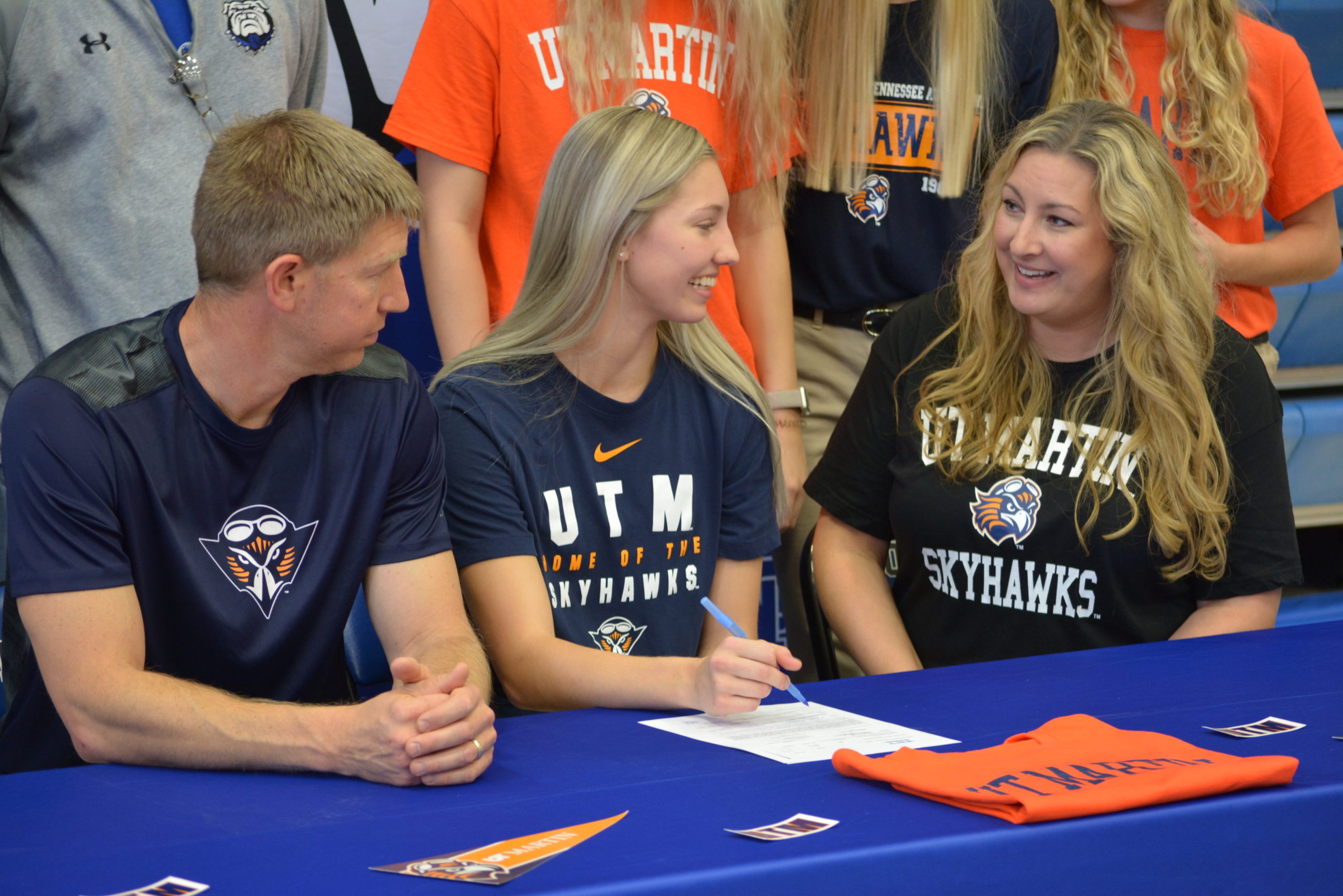 Rubel played in her last game with SEMO Sizzle after she and the team took gold at the Nike Tournament of Champions Summer Finale in Des Moines, Iowa, in July. Also this summer, Rubel helped Sizzle win the Battle in the Boro American Pharaoh Bracket Championship, and she was named Tournament MVP. Lexi and SEMO Sizzle also took home a gold bracket championship at Run 4 Roses.

“It’s weird I’ve played my last AAU season,” Rubel said. “It doesn’t even feel real — I feel like I have another season to play.”

Along with the excitement that was created by signing with UT Martin also came relief so that Rubel can now focus on her final season at Notre Dame. While Lexi’s main goal this winter is to make a run for a state championship, she also wants to have fun playing with her friends — especially Tori.

Lexi and Tori helped the Bulldogs reach the Class 4 Final Four two seasons ago, but the coronavirus pandemic forced MSHSAA to cancel the remainder of the postseason that year.

Looking ahead to her college basketball career that will begin next winter, Lexi hopes to one day compete in the NCAA Tournament.

There is a high chance that could happen as UT Martin has made the tournament four times (2011-2014) under 13-year head coach Kevin McMillan. More recently, the Skyhawks have won the Ohio Valley Conference Regular Season Championship back-to-back and had a player, Chelsey Perry, selected in the third round of the 2021 WNBA Draft.

“[Coach McMillan] will be able to push me more than I’ve ever been pushed before, which is crazy to think about because my parents have been my coaches my whole life,” Rubel said. “I just really think he’ll be able to make me the best player I can possibly be.”

Off the court, Rubel will be pursuing a career in either physical therapy or becoming a physician assistant.

“My entire family are physical therapists, and I just like being able to help people,” Lexi said. 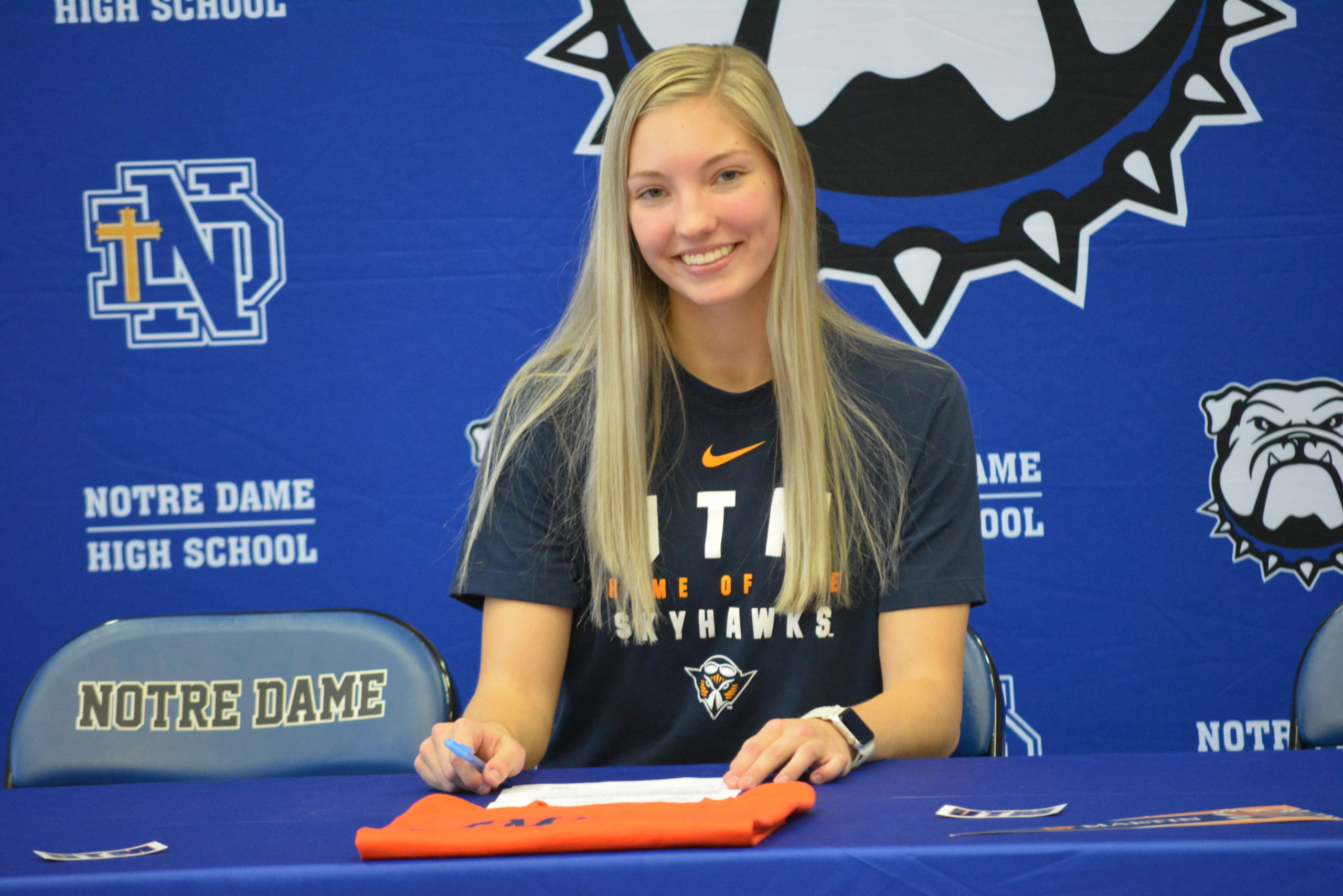 Lexi Rubel smiles one last time for the camera at the conclusion of her signing day.