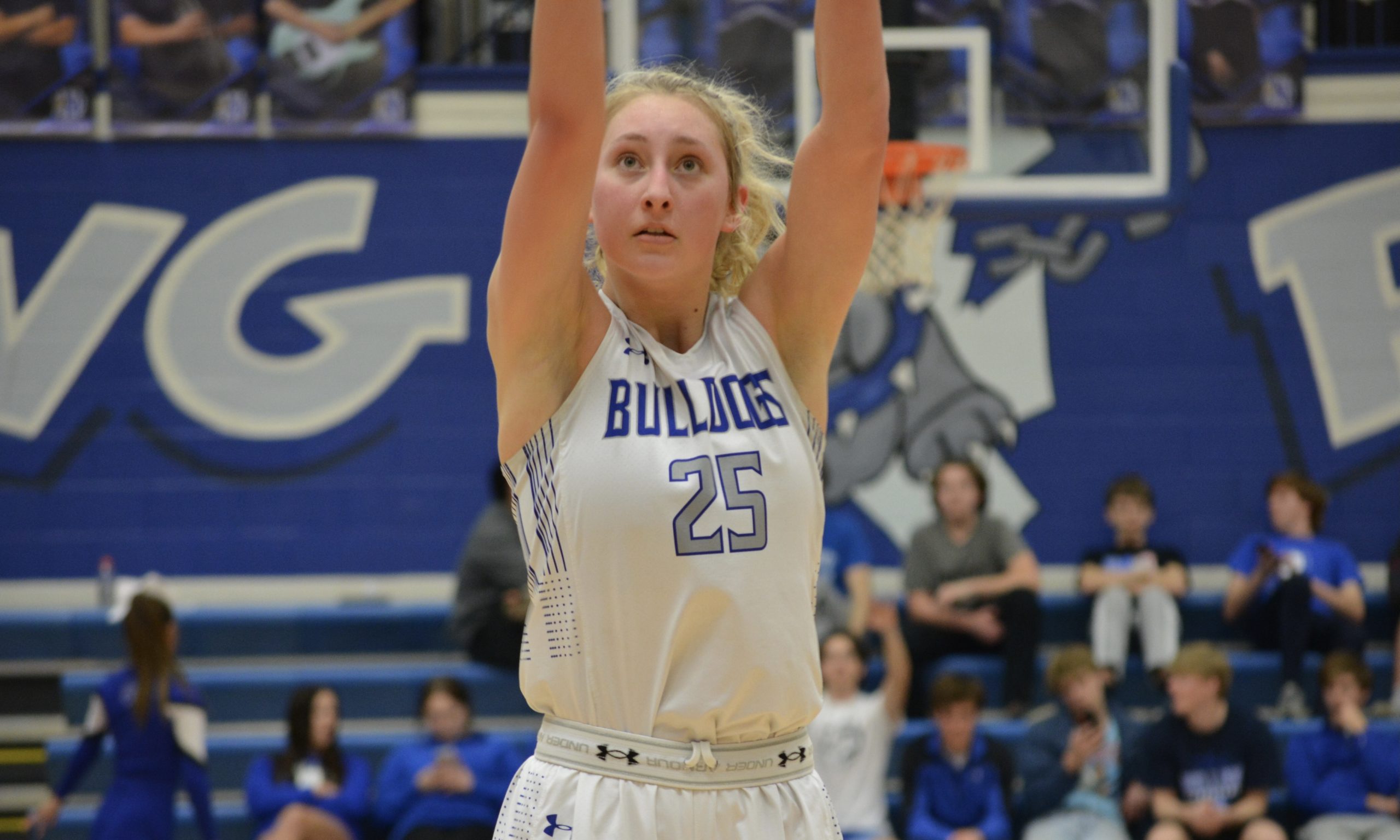 Rubel’s decision comes after a 2021-22 campaign where the 6-foot-1 guard helped the Bulldogs make the state quarterfinals for the fourth year in a row. Prior to this season, Tori’s older sister and the second half of The Rubel Duo senior Lexi Rubel signed with the Skyhawks back in November.

Tori took an unofficial visit with Lexi to UT Martin back in August, where Skyhawks 13-year head coach Kevin McMillan and his staff officially offered the sisters during their tour of the campus. Rubel said the coaching staff is one of the main reasons why she chose to be a Skyhawk.

McMillan and his staff have assured Tori that they will start applying more full-court pressure next season and on, which will implement pushing the ball quickly up the court for easy scores. Someone with Rubel’s physical qualities such as her height, length and athleticism is ideal for UT Martin’s system.

“They were talking about how they really like length and using it, which is how I like to play clearly,” Rubel said. “I just love playing fast, too. I feel like this last year I’ve gotten better at being a lot stronger overall and taking it to the hole.”

Division-I coaches were also after Tori — a three-time all-district and two-time all-conference selection — because of her skillset. As a scorer, Rubel is an outstanding shooter when attempting from both the 3-point and mid-range areas. Tori also has the ability to shoot off the dribble, and she uses her combination of size and speed to overwhelm defenders when driving to the basket.

Tori is also phenomenal passing the ball as Notre Dame’s four-year head coach Kirk Boeller said this winter that she was making “ridiculous passes — passes that high school boys aren’t making.” Rubel is also a standout when it comes to rebounding the ball, but she also loves playing defense, whether it be down low or up top.

Rubel expressed her excitement for playing under a head coach like Kevin McMillan at UT Martin because of his honesty and how much he cares about his players. The four-time Ohio Valley Conference Coach of the Year McMillan has led the Skyhawks to win 10 OVC Championships and make four appearances in the NCAA Tournament.

“He’s one of the most honest coaches I’ve talked to through the recruiting process,” Rubel said. “He said, ‘If you don’t work hard at practice, you don’t get playing time.’ He always tells us that he’s hard to play for because they’re really big into mentality. They have you work on your mentality in practice while working on your game, so he’s trying to prepare us for life and not just college basketball.

“He’s a little old school, and that reminds me of my Papa [Craig Millham], so he’s going to push us and he really cares. Every time he sees us, he gives us a big hug. Coaching is not just a pastime for him because he puts his all into the program.”

This coaching style used by McMillan helped shape a former Skyhawk like current WNBA player Chelsey Perry of the Indiana Fever. Perry, who was a two-time OVC Player of the Year recipient at UT Martin, became the highest WNBA Draft pick in OVC history when the Fever selected her 26th overall in 2021.

“That shows me that UT Martin is a good program, and we have a chance of getting into the NCAA Tournament,” Tori said. “I know they’ll work us hard, but that also shows UT Martin has had success. We should keep having success.”

The last time UT Martin made the NCAA Tournament was in 2014, which happened to be the Skyhawks fourth-straight trip to March Madness under Coach McMillan. This winning tradition and seeing OVC teams like Belmont pull off tournament upsets has Tori ecstatic to play for UT Martin.

“It is super exciting to join the OVC because of that success,” Rubel said. “It just shows you how much they care about their program and push their players, but then they also get those little joys.”

Several other Division-I programs were also recruiting Tori, but she felt these schools were too far away with some ranging seven to eight hours in travel time. Staying closer to home has always been a priority for her.

“I got to visit UT Martin, and I hadn’t gotten to go on other visits yet,” Rubel said. “As soon as I went to UT Martin, I just really liked them. They’re not right at home, but they’re far enough away and close enough for a good commute.”

Tori was impressed by the facilities at UT Martin and also, of course, Skyhawk Arena. The court Rubel will be competing on is named after the second-most winningest coach in NCAA history, which is former Skyhawk player and Tennessee Vols head coach Pat Summitt.

Coach McMillan informed Rubel that citizens of Martin, Tennessee, are very much supportive of women’s basketball. Out of all Ohio Valley Conference teams this season, the Skyhawks averaged the third-most fans at home games with 1,005 per contest.

Prior to the coronavirus pandemic, UT Martin averaged the highest attendance at home games in the OVC eight times and was also second three times since the 2009-10 season. “That’s always huge whenever the town and the school shows their support,” Tori said.

Even though Lexi signing with the school did have an influence on her final decision, Rubel said that UT Martin has always been her No. 1 choice. Tori and Lexi have been playing basketball together ever since Tori was in first grade, though, so she can’t wait to continue doing so in college.

“Being able to play with Lexi in college really means a lot. Next year at Notre Dame, I’ll get to play with our little sisters Kate and Brie for the first time since Immaculate Conception, and Lexi won’t be able to. I’ll get to see if I like playing with Kate and Brie more,” Tori joked. “But I’ve always played with Lexi. We’ve always supported each other and pushed each other. I know she’ll force me to push myself at practice in college, and I just love playing with her.”

In their final season together at Notre Dame this past winter, The Rubel Duo led the Bulldogs to their third 20-plus win season in the last four years. Notre Dame also won its third-consecutive SEMO Conference Tournament and First State Community Bank Holiday Classic championships while sweeping the SEMO Conference as well.

The Rubels were both named SEMO All-Conference, Class 5 District 1 All-District and to the 10-player Holiday Classic All-Tournament Team for their efforts this year.

Back in Tori’s first high school season, she and Lexi helped the Bulldogs make their first final four appearance since 2010. However, Notre Dame was unable to compete for a state title since MSHSAA cancelled the rest of the postseason due to the coronavirus pandemic.

This past summer, The Rubel Duo played in their final season of AAU basketball together with SEMO Sizzle. During the Division-I live recording period in July, Sizzle went 15-2 overall and won championships at Run 4 Roses (Louisville), Battle in the Boro (Louisville) and the Nike Tournament of Champions Summer Finale (Des Moines, Iowa). Tori and Lexi were each named to the Battle in the Boro All-Tournament Team.

Earlier in February before Notre Dame’s postseason run, Tori suffered a shoulder injury that she ended up having to have surgery on last week. Rubel won’t be able to return to basketball activities, such as shooting and dribbling, until at least July.

The surgery forced Tori to miss what would’ve been her final season of AAU basketball this spring and summer, where she would’ve played with a WNBA-player sponsored team — Napheesa Collier Elite. Formerly known as Blue Star St. Louis, “Phee Elite” primarily features the top talent in St. Louis and Illinois, while sometimes picking out a player like Rubel in the surrounding areas.

Collier, who currently plays for the Minnesota Lynx, won three state championships and was a two-time Missouri Gatorade Player of the Year at Incarnate Word Academy in St. Louis. She went on to win a national championship during her All-American career at UConn before being selected sixth overall by the Lynx in 2019.

Potts is ranked as the No. 1 player in Missouri’s Class of 2023 by Prep Girls Hoops, while Rubel is only three spots below her at No. 4. The only other two juniors ranked above Tori are Grain Valley’s Grace Slaughter (Missouri commit) and Republic’s Kaemyn Bekemeier (Missouri State).

When Tori Rubel makes her return to the court in preparation for her final season at Notre Dame, she will be focusing on developing her game, improving her shot and becoming stronger. Rubel is not nervous at all about making a full comeback since her doctors have ensured her that she will be back to 100% around six months after surgery.

Next winter will also be the first season Tori plays without Lexi, who finished her Bulldog career as a three-time all-state honoree, a three-time district player of the year selection and a one-time conference player of the year pick. Also in her final year, Lexi became Notre Dame’s all-time leader in rebounds, assists and steals while finishing as the program’s second all-time leading scorer.

“During high school, I’ve always had Lexi, who was kind of ahead of me,” Tori said. “Now I really want to focus on my leadership role and really live up to what Lexi did. Every day at practice, Lexi won’t be there to push me as hard, but I can push myself. Kate and Brie will be there, and Anna Garner and Jenna Givens will push me, too. Being a senior and it being my last year, that will motivate me to not take anything for granted and just try to work hard and give 110% every day.”