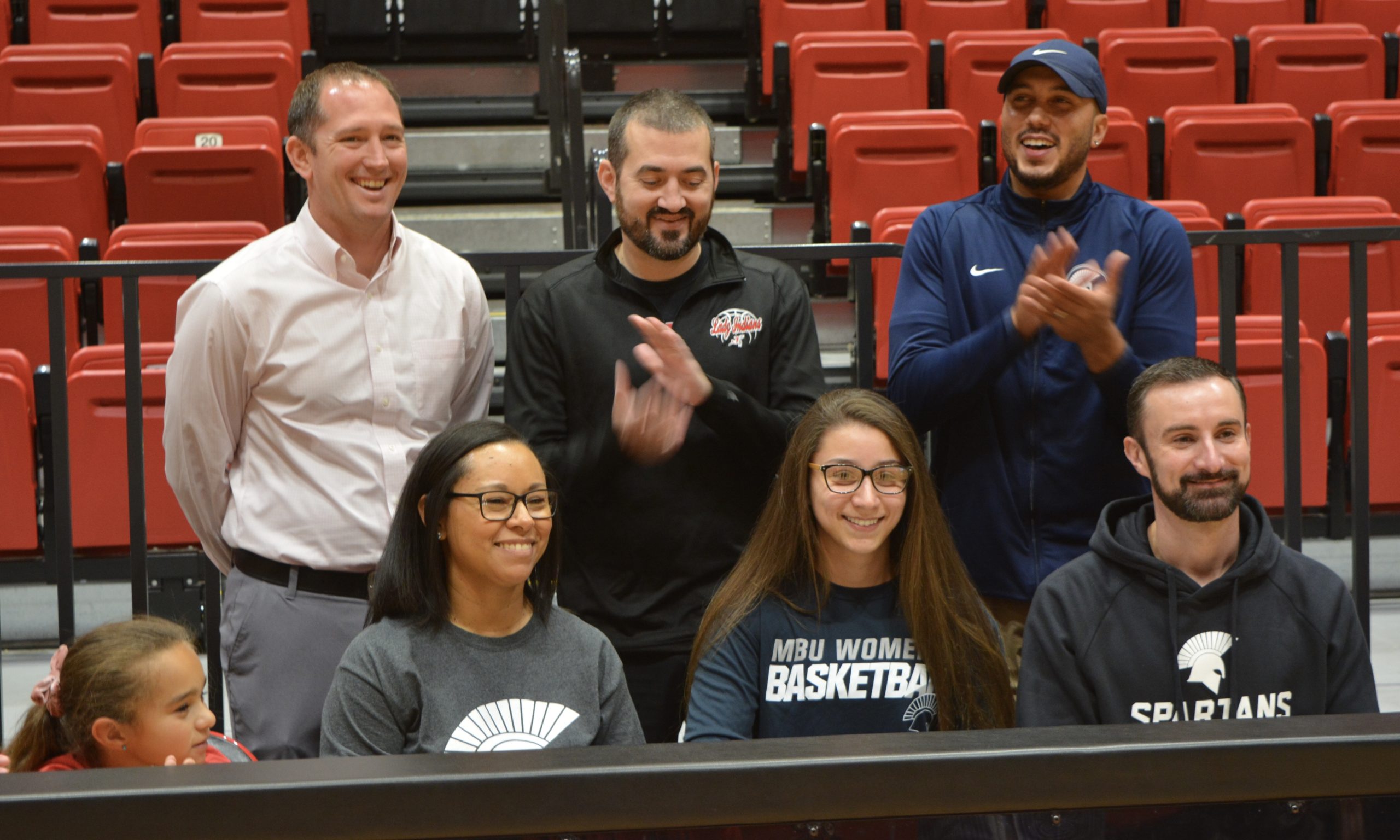 When senior Jordyn “Jo” McClellan came onto the scene as a freshman for the Jackson girls basketball team, she caught the eye of her future head coach at Missouri Baptist, Sam Pearson.

Coach Pearson was watching the Indians that season to scout his team’s current American Midwest Conference All-Conference selection and Jackson 2019 graduate Alexis Allstun, and he was impressed with McClellan from the get-go.

“Jo has been special for quite some time now — it began her freshman year, really,” Pearson said. “When we were here recruiting Alexis Allstun, I saw this little point guard who was lengthy and can shoot it.”

Last week, Coach Pearson and Missouri Baptist locked McClellan up as she officially signed with the Spartans to continue a basketball career that began at a very young age. Basketball is a sport that Jordyn describes as being her life.

“Playing college basketball has been a dream ever since I was young. I thought it would be so cool and be ‘the life,’” McClellan said. “Distance was a really big thing for me — I wanted to stay close to home. It was a challenge to find the right college, but I made it.”

Back when she was a freshman in Jackson’s starting five, McClellan said she was “really nervous” but that the upperclassmen, like Allstun, more than welcomed her. Another former Indians teammate Madison Lambert (2020 Jackson graduate) also currently plays at Missouri Baptist with Allstun.

Allstun, Lambert and McClellan helped lead Jackson to record its most wins (24) in the 2018-19 season during former Indians head coach Tyler Abernathy’s longtime stint. Jackson also won the SEMO Conference Regular Season and Tournament Championship along with a district title that year as the Indians fell to Parkway Central in the state quarterfinals.

McClellan and Lambert combined for another district championship and 20 wins last season, where both players garnered all-conference and all-district honors. They both also earned all-district the year before along with Allstun.

“The possibility of playing with those two again really helped me make my decision. I’m going to go in there knowing a couple people,” McClellan said. “It helps you become more comfortable with everybody. It’ll be nice to be back together. I can’t wait — I’m excited.”

McClellan has been able to keep in touch with Lambert quite a bit, and Madison described the coaches at Missouri Baptist as “just awesome.” Lambert also said the coaching staff really cares and not just about basketball.

“Coach Pearson is very energetic, which I love. He really brings the energy, and I can tell he cares,” Jo said. “He’s always there for you and wants you to be you.”

The only reason McClellan isn’t a three-time all-district and two-time all-conference selection is because prior to her sophomore year, she suffered a torn ACL while playing with Jackson during the summer. She missed the entire 2019-20 season because of it and didn’t play basketball again until that next summer with her longtime AAU squad, SEMO Sizzle.

Jordyn said overcoming her ACL tear was extremely difficult for her to the point where she thought basketball might not be in her future. Not playing the sport in that span helped her realize, though, that she wasn’t ready to give it up just yet.

“I kind of hit a road block — I wasn’t really sure what I was going to do after high school,” McClellan said. “It was God’s plan, honestly. It was a sign to not give up.”

McClellan played in her final season with Sizzle this summer and helped them finish 15-2 in July while winning the Battle in the Boro American Pharaoh Bracket Championship and gold titles at Run 4 Roses and the Nike Tournament of Champions Summer Finale.

Being on the team with McClellan since she first started playing for SEMO Sizzle back in fifth grade has been Notre Dame sisters senior Lexi Rubel and junior Tori Rubel, while current Jackson teammate and junior Katie Waller has been on Sizzle the last two seasons.

“Playing with SEMO Sizzle was a blessing, honestly,” Jordyn said. “They’re literally my second family, and I’ve been best friends with Lexi and Tori since about fifth grade.

“It’s changed a lot for me. AAU basketball is very competitive, which has made me grow as a player. I’m very grateful for that and Coach Matt [Rubel]. The talent is unbelievable with SEMO Sizzle — we came so far. I’m very sad that we’re not playing next year. It’s just great.”

Another individual who helped shape McClellan into the person, player and specifically shooter she is today is her father, Jamie. Jordyn made a team-high 58 3-pointers for the Indians last winter while shooting 40.6% from beyond the arc.

“Shooting kind of came natural to me, but then I just kept working on it throughout the years — my dad helped,” McClellan said. “Don’t tell him I said this, but my dad did help. His head will grow really big, but my dad did really help.”

Off the court, Jordyn will be pursuing a career in physical therapy. McClellan has always wanted to enter the field, but she was really motived to do so after going through her injury.

“I want to help people with their injuries and get back to the sport they love to play,” Jo said.