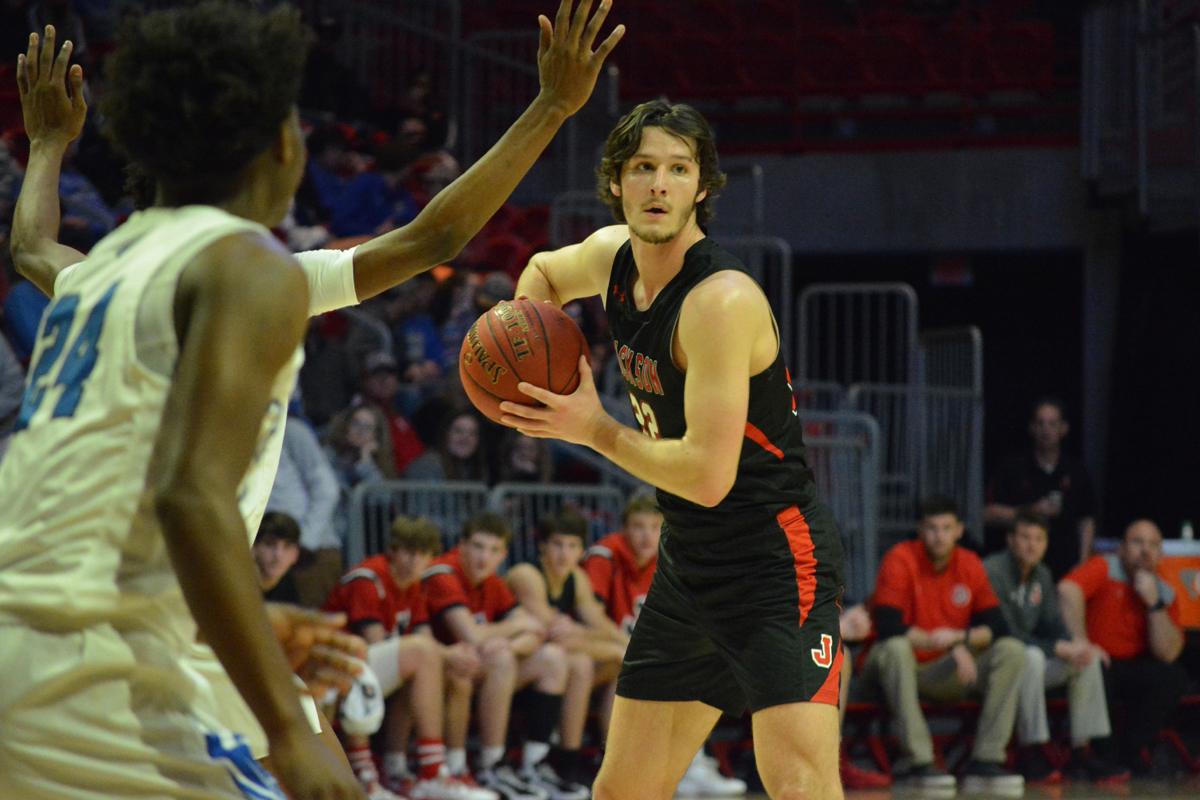 Jackson senior forward Nick Wasilewski was voted to the 2021 Southeast Missourian Christmas Tournament All-Tournament Team. The Indians reached the championship game for the first time since 2018 with Wasilewski leading the way. Photo by Jay Forness

For the first time since 2018, Jackson boys basketball head coach Darrin Scott took his young yet experienced team to the Southeast Missourian Christmas Tournament Championship game. The Indians were pioneered by an all-tournament caliber performance from senior forward Nick Wasilewski and other key contributors.

Jackson received the second seed coming into the tournament. This spot may have been slightly controversial having been placed over Cape Central, which had defeated the Indians by double digits in the SEMO Conference Tournament.

The only team to be seeded over the Indians were the Charleston Blue Jays, who were eventually crowned as champions of the tournament, thanks to a 51-46 win over the Indians.

The Christmas tournament title game was a rematch of a SEMO Conference Tournament third-place matchup, where the Blue Jays eked one out against the Indians 63-58.

For the first two quarters, it was a back-and-forth affair where no team could pull out front long enough to get comfortable. Jackson junior Steven Schneider converted on back-to-back buckets to give Jackson a 15-13 lead, but they watched that edge slip away rapidly as the Jays took a 27-20 lead heading into halftime.

The Indians went to work in the third quarter with a five-point spurt from sophomore guard Blayne Harris to put Jackson right back in the saddle for a 27-all draw. Fletravion Stanback, another all-tournament talent, went to work swiftly for Charleston.

Two possessions for the Jays saw a five-point edge after Stanback converted an and-1, and Charleston never faltered from that point.

Jackson rallied back within two points after Wasilewski forced one in and drew the foul, but turnover woes and inexperience truly were the downfall of the Indians in the second half. With one last chance after a missed free-throw from another Charleston all-tournament selection in Rico Coleman, Jackson watched the opportunity slip away after a ball got knocked loose in the corner.

To begin the tournament, the Indians faced No. 15 seed Delta Dec. 26. The opening games for the higher-seeded teams always proves to be a great opportunity for them to play deeper into their rotation and give some of the younger players more minutes.

This game was no exception as sophomores Braeden Thoma, Judd Thoma, Conner Matthews and Gavin Hold-man all received minutes as Jackson routed the Wildcats 68-20. Leading Jackson in their tournament opener was senior guard Elliot Cowell, who scored 12 points in the game.

The Indians also saw key contributions from sophomore guard Blayne Harris with nine points and senior forward Nick Wasilewski with eight. Cowell’s team-high doubled as a game-high as Delta’s leading scorer Carter Scherer scored nine of the Wildcats 20 in the game. Six of those nine came from the charity stripe.

On the opposite end, Jackson scored just five free-throws throughout the contest, doing most of their work from the field. This win propelled Jackson to the second round once again, where it took on the Advance Hornets, ranked seventh in the field.

Advance was fresh off of defeating Scott County Central 81-61, giving them the right amount of momentum moving into the quarterfinal.

Led by eventual all-tournament performers in Jaren Schrader and Hayden Laird, the Hornets were set to give Jackson a challenge. Advance was aiming to knock the Indians off in the quarterfinals for the second-straight year as Jackson fell to Kelly in last year’s tournament.

After tip-off, the Indians and Hornets traded buckets, but after about five minutes Advance formed a 13-10 lead over Jackson. This challenge would soon stall and it was all Jackson from that point.

By halftime, Jackson had formed a 39-24 lead and didn’t look back. The duo of junior post Clayton Ernst and Wasilewski combined for 36 points as the Indians walked right over the Hornets, 67-44.

Aside from the two bigs trading buckets, Harris solidified himself as a go-to scorer for the Indians. Blayne came away with 14 points in the contest, which would go on to be his most across any performance in the tournament.

The win set up an all-important semifinal, of which the Indians had historically faced a fair amount of problems. Most importantly of all was the opponent — Cape Central. The Tigers had won the past twelve matchups against the Indians, with Jackson’s last win over Cape dating all the way back to February 2015.

This matchup truly was a test to see whether or not the Indians could exercise their demons on one of the largest stages. It took over a quarter before the scoring dam fell as Jackson trailed Central 8-6 after the first frame.

Strangely enough, though, it wasn’t until an unfamiliar face for large moments came through for the Indians before they came up with their first lead. Schneider ended up scoring the hoop and drawing the harm for the Indians at the start of the second quarter to give them a 9-8 lead.

There was minimal separation between the two squads, but it was Jackson that entered the half with a 21-15 lead over Cape Central. The tension in this contest was very apparent, with numerous fouls being called against both teams.

To start the second half, it was Central that came out of the gate hot. Junior post Cameron Williams, who was another all-tournament team selection, converted on a free-throw followed by back-to-back buckets from senior Jonathan Brandtner to cut the Indians lead to just one.

Buckets were falling on one end, then the other and constantly raising the stakes to make the game more nerve-wracking. When the third quarter closed, Jackson led by two at 30-28.

Ernst started the fourth off by muscling inside for his seventh point of the game, but Cape’s Williams scored from deep to once again slice the edge down to one.

This was the story of the entire game. Following another Jackson bucket from Wasilewski, Central’s Cade McClard drained another shot from beyond the arc to put Cape back even-or-ahead for the first time since their 8-6 lead to end the first.

However, these stages are often set up for unlikely heroes. With Jackson up by two with the ball and just two minutes left in the game, Kaed Winborne had a wide open shot from beyond the college arc and drilled it, sending the student section into a frenzy and putting Jackson up by five.

This lead held strong and Jackson took the game 44-36 to snap the half-decade-long streak and sent themselves to the Southeast Missourian Christmas Tournament final for the first time since 2018.

Though losing to Charleston in the title game was heartbreaking for the Indians, it was a very impressive showing. Jackson will resume its season in a SEMO Conference matchup against Kennett this Friday at home.