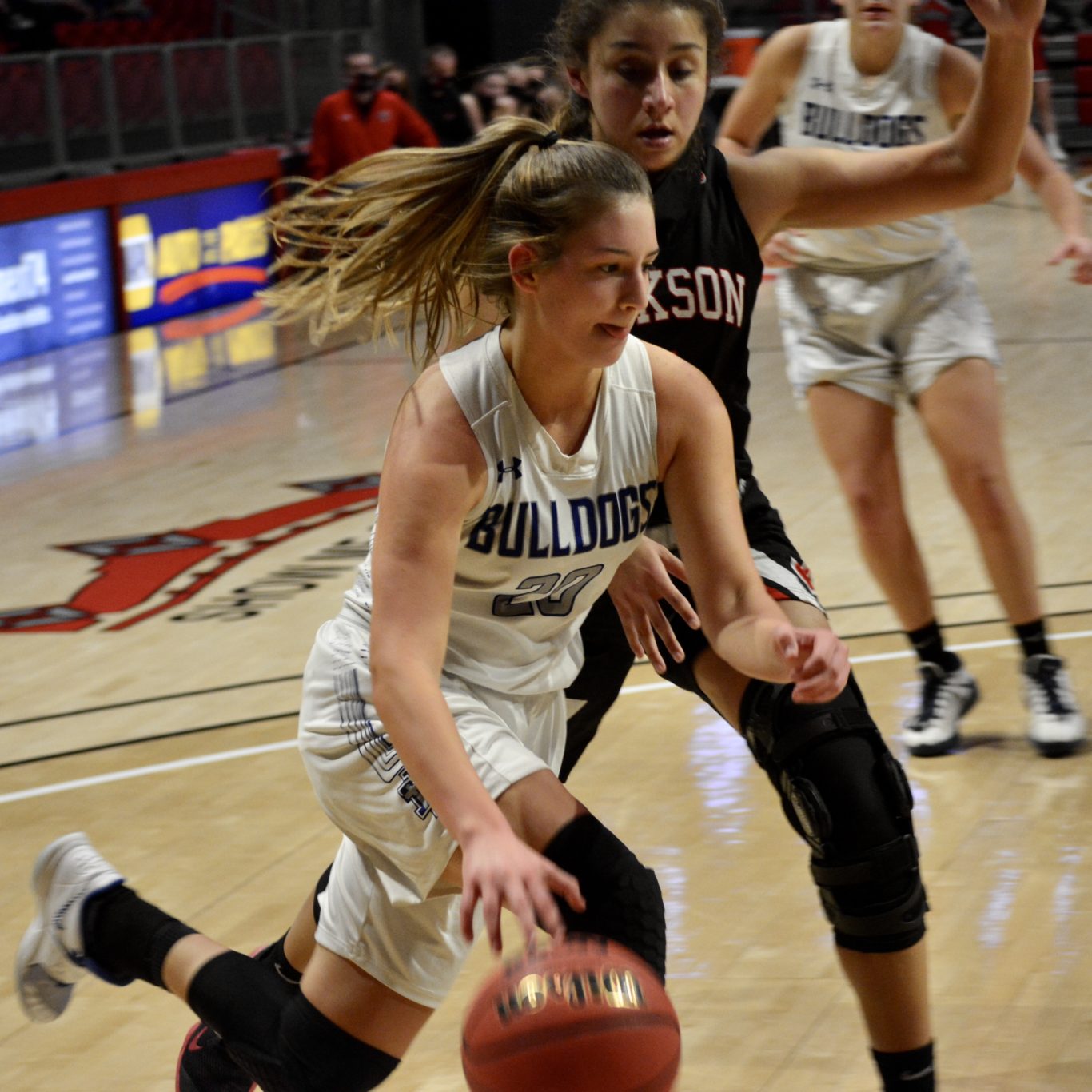 After winning the First State Community Bank Holiday Classic for the second-straight year on Dec. 22, the Notre Dame girls basketball team finally returned to action last week. The Bulldogs certainly had their hands full as they faced two teams that are ranked in the top three of the statewide Missouri High School Basketball Coaches Association polls.

Notre Dame (7-1) — ranked No. 5 in Class 5 — first traveled to take on then undefeated Class 4 No. 1 ranked Park Hills Central (10-1) Thursday night. The Bulldogs headed into the contest without their returning all-stater and leading scorer junior Lexi Rubel, who was forced to miss both games last week with an illness.

In the two meetings between Notre Dame and Park Hills Central last season, the Bulldogs came out on top 52-45 in the regular season and lastly 49-38 in the Class 4 Sectionals. The Bulldogs were moved to Class 5 this  year because of MSHSAA’s new championship factor for private schools.

Rubel paced Jansen in scoring with 12 points of her own as she also finished with two triples. Rubel led Notre Dame in rebounds by collecting six of her team’s 20, and she finished in a three-way tie for most steals at three with Dohogne and junior Sydney Seabaugh.

Burnett and Dohogne, who each scored eight points, tied for most assists with three apiece as Dohogne finished 4-for-4 at the free-throw line, while Burnett hit two threes along with Jansen and Rubel.

The game consisted of nine lead changes until Notre Dame took the final one in the fourth quarter, 41-38, after the Bulldogs were able to go on a 8-0 run. Park Hills was able to tie the game at 41-all shortly after, but Notre Dame went on a 7-0 run to go up 48-41 with under five minutes left in regulation.

However, with 23 seconds left, the Rebels made it a 1-point game after a 6-0 run, but the Bulldogs played defense and were able to hold on for the win. Central senior Sophia Horton, who has signed with Lindenwood (Division II), scored a game-high 21 points and hit two triples.

Outside of Horton, only one Rebel scored more than seven points as senior Kaley Kimball finished with 11, but she only scored three in second half with Rubel guarding her most of the way. Rubel had to miss some time in the second quarter due to foul trouble, where Kimball recorded six points.

“That one was interesting,” Notre Dame head coach Kirk Boeller said. “That was the first one without Lexi, so we started a little sluggish. Then at halftime, we found a rhythm and got everything lined up. Girls stepped up in that game — Sarah Brennan and Sydney Seabaugh came off the bench and give us awesome minutes.”

Next up for Notre Dame was Class 5 No. 2 ranked Helias Catholic (8-1) as the team’s only loss of the season is to Class 6 No. 3 Jefferson City, 60-42. Not only did the Bulldogs have to face the Crusaders without Lexi Rubel, but they also had to play without Dohogne, who suffered a minor hip injury against Park Hills.

If being down two starters wasn’t enough for Notre Dame, it also had to do without Tori Rubel in the final 18 minutes as she had to be taken into the locker room with two minutes left until halftime (medical issue). Rubel returned to the sideline in the middle of the third quarter ready for action, but Coach Boeller didn’t want to risk anything.

Burnett, who recorded her second-straight start for the Bulldogs against Helias, also missed a majority of the game with an injury. This left Jansen and fellow junior Kristin Edmonds as the only two original starters in the game with players like Seabaugh, senior Alora Smith, junior Sarah Brennan and junior-varsity call ups in sophomores Anna Garner and Jenna Givens.

“With all of that taken into account and not having four of our top six, to me it goes to the testament of talent and depth we have on this team,” Boeller said. “I thought we had three or four girls really step up defensively and make some big plays. It’s certainly nice to have a full, healthy roster, but there’s adversity sometimes, and I thought our girls did a good job of stepping up.”

This was the first time Garner or Givens ever played in a varsity game, and they certainly didn’t disappoint Coach Boeller. Even though Garner failed to score against Helias, she was physical and played well defensively.

As for Givens, she finished tied as Notre Dame’s second-leading scorer with seven points off two threes. In the J.V. team’s win over Park Hills, Givens knocked down seven 3-pointers.

“That was the first time they’ve thrown on a varsity jersey, and I’m throwing them out there against the No. 2 team in the state, but they handled it,” Boeller said. “I was really impressed with how calm they were, and to see how they reacted to that environment. It didn’t look like we missed a beat when they were out there.”

Jansen was once again the Bulldogs leading scorer by producing 13 while hitting two threes of her own to finish with 26 points through two games. Heading into the Park Hills Central game, Jansen was averaging less than six points per game.

“She’s always been able to get to the basket,” Coach Boeller said. “In the last couple years, her 3-point shot has really developed. She hasn’t really needed to be our leading scorer, but she can do  it. When she chooses to put the ball on the floor and get to the basket, she can get to 15, 20 points easily.”

As for Edmonds, she finished in the top-three scoring as she tied with Givens at seven points. With two minutes, 40 seconds left in the game and trailing 36-32, Edmonds had a 3-point attempt bounce out of the rim.

Ultimately, Notre Dame suffered its first loss of the 2020-21 season, 47-40, to Helias as four Crusaders finished with double digits in the scoring column. Helias was able to win the game with its free-throw shooting as it went 13-for-19 from the charity stripe in the fourth quarter.

Combining for 44 points for the Crusaders were seniors Kylie Bernskoetter (12), Linsdey Byers (11), freshman Adalyn Koelling (11) and sophomore Mikah Edwards (10). Bernskoetter made five of her six free throws during the fourth.