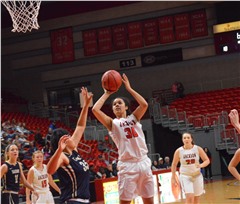 The Jackson girls basketball team was ranked seventh in Class 5 by the Missouri Basketball Coaches Association for the 2017-18 season.

The Indians started their season off proving their ranking with a 66-40 win over Nerinx Hall at home. Jackson held the Markers to just nine points in the first half for a 33-9 while junior center Alexus Allstun scored nine of her 22 points.

Finishing behind Allstun in scoring was fellow junior Kalli Mayfield with 14 points, and she also had four rebounds and three assists.

Allstun had five rebounds as well with senior Mah Massey leading the way with six boards.

For the second-straight season, Jackson’s head coach Tyler Abernathy enters his eighth year at the helm having to replace four of his five starters.

Coach Abernathy successfully did so last year as the Indians advanced all the way to the state quarterfinals as well as winning their second district championship in the last three seasons.

“For a lot of teams to replace four starters two years in a row that’s quite a lot of production and depth we’ve lost,” Abernathy said. “We have three seniors who do a phenomenal job and have been in the program since seventh grade. Honestly, it has felt like a pretty seamless transition in practice.”

Only two players averaged more than 10 points per game for Jackson last season, one was former Indian Rylee Stafford 13.5 and the other was Allstun.

Both were named to the all-conference and all-district teams as Stafford was the team’s best three-point shooter, having made 68 of her 157 attempts for a shooting percentage of 43.

Allstun averaged 11.4 points per game her sophomore season, and she was Jackson’s leading rebounder by 109 boards with an average of 6.9 per contest.

“[Allstun] is a stud,” Coach Abernathy said. “A very, very good player. She’s a phenomenal leader, and I think you’re going to see her be much more aggressive and assertive with this group. Her skills have developed, and she’s become a better player from about 15-feet out, so we’re looking for some improvement in that area.

“More than anything, though, we want to see her be the kind of player to take a game over because she has that ability. It’s always nice to have one of them come back, and we’re excited to have her back.”

Third in rebounds on last year’s team was Massey with 2.6 per game, who looks to fill one of Jackson’s forward positions this year after contributing off the bench in 2016-17. Massey was also fifth in scoring at 4.3 points per game.

Two other players who came off the bench for Jackson and will find their way into the starting five is senior Grace Pehle and Mayfield.

There are only three seniors on this year’s team compared to eight from last year with the third being Emma Masterson.

Pehle and Martin each played in 25 games or more last season as Martin averaged three points per game where Pehle was able to distribute the ball for 1.2 assists per game and averaged one steal.

Coach Abernathy said the theme for this year’s squad, much like every year, is for the team to get one percent better each day.

“I really believe at the high school level it’s just about getting better every day,” Abernathy said. “Obviously you want to win every game, but everything boils down to playing your best at the end of the year. I think that has to be your focus point. You can never get too high or too low during the season because you’re going to have bumps in the road.”

Focuses Abernathy has set for this team includes being impressive defensively and being able to get the ball to the players they want offensively in the spots those players want to score.

What Coach Abernathy thinks has separated his teams the past couple of years in being able to win championships is playing the defense they want at a high level.

In last year’s district tournament, Jackson did not allow for an opponent to score more than 32 points. This allowed the Indians to capture their fourth district championship with Abernathy by defeating Dexter 65-30.

“We’ve still got to figure ourselves out as a group,” Coach Abernathy said. “We have people in different roles and people are going to be playing much larger minutes. Finding consistent scoring is going to be something we’re looking at quite a bit.”

Coach Abernathy said the key focus is that the players make sure these players come together as a team while also enjoying each day during practice since they are taking the big picture approach.

Heading into this season skill wise, Abernathy admitted his team will be different from years in the past as his players are taller, stronger and more athletic. The culture of the program has not changed because of the upperclassmen.

“You have those juniors stepping in as seniors into those roles and being able to carry that culture along,” Coach Abernathy said. “I’ve been pleased with them every day ever since the spring.”

Jackson has five players on its roster this year that are 5-foot-10 or taller with two players at 6-foot-tall in Allstun and junior center Michala Stone.

Abernathy hopes to develop a rhythm where Allstun and Stone can be on the court at the same time.

Coach Abernathy also hopes to use such length to his team’s advantage defensively by taking opposing teams out of their rhythm offensively with turnovers off deflections.

This should turn into easier baskets offensively off fast breaks, but this will also affect the offense since scoring will primarily start in the paint instead of outside shooting.

Abernathy believes his team can be back to the type of offense that thrives from shooting the ball beyond the arc, but that it is going to just take time to get back to that.