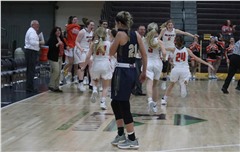 The Saxony Lutheran girls basketball team was hoping to punch its ticket to the Class 3 Final Four for the first time in three years with a win in Saturday’s quarterfinal, but the Crusaders came up nine points shy of doing so.

Sending the game into overtime was Saxony sophomore Alice Hogendobler, who hit a 3-pointer with 22 seconds left to tie things up and keep the Crusaders hopes of reaching state alive.

“Alice is a streaky shooter as much as anybody, but Alice is a very confident, young woman — she doesn’t get down,” Saxony head coach Sam Sides said. “She has a great attitude, and she’s very confident. We need that, and she wants to take that shot. When she gets hot she can make them.”

Hogendobler hit another trey earlier with 4:01 left in the fourth quarter, which helped spark Saxony to eventually tie the game. Senior Macey Smith hit her third 3-pointer of the game 41 seconds later to narrow Licking’s lead to 48-45.

Smith finished with a game-high 18 points in her final game as a Crusader and tied for a game-high four shots made from beyond the arc. Saxony managed to make a total of eight 3-pointers to Licking’s six.

Last year, Smith transferred in from Delta after the school’s program was shut down due to not having enough players for a team. Sides has noticed Smith’s ability as a competitor ever since she traded in her blue and white jersey for a blue and gold one.

“Macey has the ability to step up, and when she first played here it was on J.V. because of the transfer rule, but I saw she had fight in her,” Sides said. “That’s a quality that I admire, and regardless of the score you see someone playing with desire and fight that’s a great attribute. I was happy for her to have a good last game.”

Leading all scorers was Licking junior Karlee Holland, who put up 33 points and tied fellow junior Abagail Moncrief for a game-high nine rebounds. Holland also hit four three-pointers and finished 13-of-15 at the line.

Moncrief paced Holland with 14 points of her own, while missing her first seven free-throw attempts before making two in overtime.

“I didn’t think we played exceptionally well — we made a lot of mistakes,” Coach Sides said. “We were outrebounded, they handled the ball better than we did, and we were really fortunate to stay in it to tell you the truth. We could’ve quit because we were down by seven twice and battled back and hit some big shots, but we’d turn it over and make a bad play here and there. In a close ball game you just don’t get that many opportunities, so you can’t make those bad plays.”

The Crusaders allowed Licking to go on an 8-0 run in the first four minutes of the game, where Holland found herself open in the corner for two 3-pointers.

Sides took a timeout following Holland’s second make and switched his defensive scheme to a spread zone in order to not leave shooters wide open.

This adjustment allowed Saxony to regain the lead twice in the second quarter. Both lead changes happened off defensive rebounds as junior Emma Brune took hers back for a layup to make it 13-12, while senior Cass Wunderlich found Smith later on for a 3-pointer to make it 20-17.

The Crusaders took a seven-point, 27-20 at the beginning of the third quarter after another 3-pointer by Smith, but a trey from Holland and sophomore Anna Sullins made it 27-26. The Wildcats went on a 9-0 run to end the third, where Holland scored five points and had two assists.

Brune has been Saxony’s leading scorer throughout the season with an average of 20 points per game, but she failed to reach double digits and only scored nine after being shutout in the first quarter and in overtime.

Wunderlich was the only Crusader to score in overtime as she hit a 3-pointer with 12 seconds left in regulation and finished with 13 points.

For the 2019-20 season, Saxony will have to replace Smith, Wunderlich and senior Bri Jenkins in the starting lineup as the Crusaders will attempt to win an eighth-straight district title.