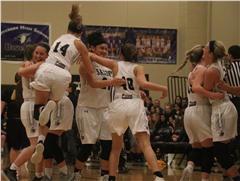 The victory did not only bring the Crusaders their seventh-straight district title, but it was also the 500th win of head coach Sam Sides’ 40-year career.

“That’s pretty special,” Coach Sides said. “I knew heading into this year I was going to get close, and we would have to have a good year to do that, but we don’t want to stop now. We want to keep playing, but this team played one of their better nights defensively that we played all year.”

Saxony’s defense held every district opponent to under 40 points in this year’s tournament, while also doing so in seven other games this season. Arcadia Valley scored a tournament-high 85 points over West County in the semifinals.

Rising to the occasion throughout the district title game was senior Cass Wunderlich, who recorded a game-high 11 rebounds while also coming away with one block and one deflection.

“[Wunderlich] has moments throughout the year where she just turns it on — she can play,” Coach Sides said. “I told her coming up here, ‘We need double figures out of you tonight.’ Rebounding, defense and handling the ball — she does whatever we need her to do. She’s just a good all-around player.”

The holder of Saxony’s single-season scoring record junior Emma Brune led the way offensively with 17 points as senior Macey Smith paced her with 11 for the Crusaders. Wunderlich finished third in scoring with six points while junior Olivia Spanley and sophomore Alice Hogendobler each put up five off the bench.

The Crusaders only made three of their 18 3-point attempts as Smith hit one in the first half, while Hogendobler and junior Makayla Mueller each made one in the second.

“We have girls who can make shots — we’re a better shooting team than what we’ve showed here,” Sides said. “Sometimes we get antsy, and we don’t have faith in that shot. You can’t shoot the ball if you don’t have faith — you’ve got to believe you’re going to make it even if you miss 27 in-a-row. The next one is going in.”

Sides said he will need Mueller and Smith to take on this mindset to continue to be Saxony’s scoring threats on the outside moving on into the Class 3 playoffs.

Even though the Crusaders only finished with three made shots from beyond the arc, Coach Sides was pleased they were still attempting them.

“We knew our 3’s weren’t falling, so we knew we had to get [the ball] inside and drive, and that’s what we did,” Brune said. “It started working out well for us.”

Heading into the game, Arcadia Valley had three players who were averaging 10-plus points per game. Only two Tigers did so against Saxony as sophomore Gracee Smith scored a team-high 12 as senior Jaesa Brockes paced her with 11. The Crusaders held the Tigers to only 14 points at half where Smith only had two.

“They’ve got some good players — they can shoot the ball, and you can’t give them space,” Sides said. “We had to try to reduce their opportunities, and that’s what we did. We didn’t get beat too much on one-on-one situations. I thought that was key.”

Saxony finished with six steals and forced Arcadia Valley to turn the ball over nearly 20 times. Coming up with one of these steals was none other than Brune, who hopes to win the sectional round for the third time in her career tonight against St. James.

“[Winning districts again] is so awesome, and it just shows that all of our hard work has paid off,” Brune said. “We knew [this game] was going to be super tough after seeing [Arcadia] yesterday — they played really well and they’re a high-seed team. We knew we had to stop them on defense.”

Brune is currently putting up 20 points per game and is the only Crusader averaging double digits in the scoring column. She also has the highest field-goal percentage among starters at 50.

Brune paced Wunderlich in rebounds with six and currently is Saxony’s third-leading rebounder with four a game. She finished with three apiece on the offensive and defensive glass.

“[Brune] rebounds really well for a small player, but she’s aggressive and is really mentally tough and a determined player,” Sides said. “She’s just been a blessing to coach — she’s as hard nosed of a kid I’ve ever coached. I’m glad she plays for me.”

Brune has started for Coach Sides in every game for the last three years, and she was glad she was able to be on the team to get him to 500 career wins.

“He’s an awesome coach — he’s just amazing,” Brune said. “He does everything for us, and he cares about us. We really wanted to do it for him tonight.”

Only coming up with one point, three rebounds and one assist in this game for Saxony was senior Bri Jenkins, who had two fouls in the first quarter. This allowed Spanley to play the majority of the game and finished with five rebounds along with a steal.

Heading into districts, Saxony finished the regular season 1-5 in the last six games as four of those defeats came to SEMO Conference opponents for the Crusaders to finish fifth in the conference standings at 3-4.

“We struggled a lot [at the end of the regular season], but we knew the start of the postseason was a fresh start,” Brune said. “We just wanted to come out and win. I think we’re ready [for the playoffs]. We want to go all the way.”

The last time Saxony went all the way to state was in 2016 as the Crusaders reached the Class 3 State Championship game but fell to Strafford 50-46, which has won the last three state titles.

Saxony will have to defeat St. James (13-15) in the sectional round tonight and finally Licking (24-4) or New Madrid County Central (25-2) in the quarterfinals to reach the Final Four.