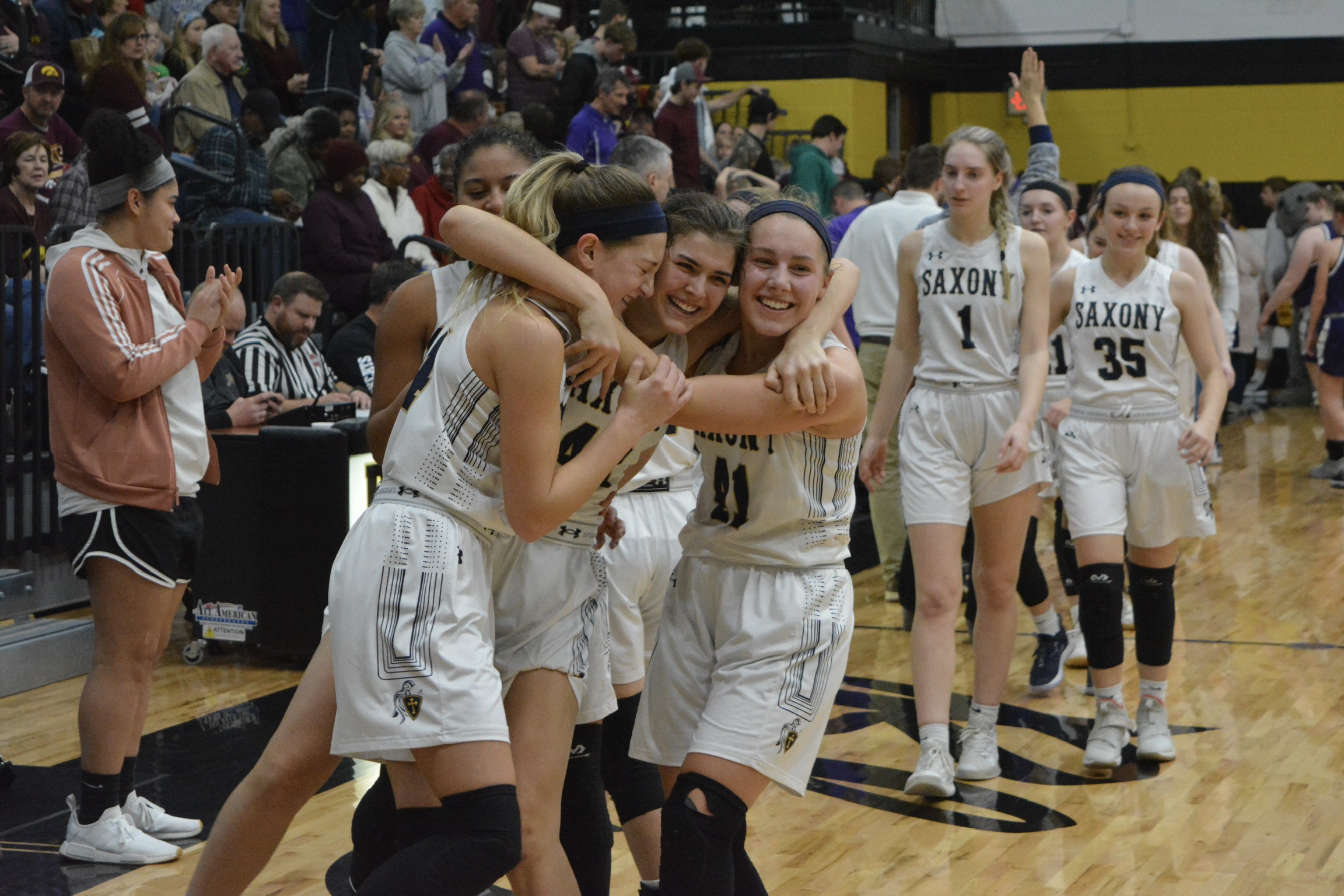 Throughout life, some things change, and some stay the same. For the Saxony Lutheran girls basketball team, the reign of winning a district championship did not come to an end this season.

The No. 1 seeded Crusaders (17-11) captured their eighth-straight district title with a 12-point, 64-52 win over No. 2 seed West County (20-7) on Friday night at Fredericktown High School. Saxony earned the No. 1 seed over West County, thanks to a coin toss.

However, luck did not win the Crusaders this game as they were able to dominate the boards with a combined total of 30 rebounds and also recorded 12 steals. Saxony also used several scoring runs throughout the game to break away from the Bulldogs.

The Crusaders were led by none other than their four-year starter in senior guard Emma Brune, who finished with a game-high 25 points and six steals. She also collected four of her team’s rebounds. Now just like her older sister Maddie, who graduated from Saxony in 2016 before Emma was a freshman, Brune is a four-time district champion.

“It’s just amazing,” Brune said. “We’ve worked so hard for this, and we wanted it so bad and got it. It’s kind of indescribable honestly.”

Heading into the game, Saxony had recorded a combined 32 steals as a team with Brune leading the way and had nine in two games. Brune has become known for scoring layups on fast-break opportunities off steals, which she did several times in the game.

“[Last] week in practice, we really focused on our defense because defense wins championships,” Brune said. “Getting the little tips and steals helps a lot during the game. [Continuing to create turnovers] is huge and gives us a lot of confidence that we know we can do it.”

The Crusaders were able to take a 24-14 lead in the second quarter, but West County brought the game within two at 28-26 as the Bulldogs went 7-for-7 from the free-throw line. Brune then went on a 5-0 scoring run by herself starting with a pass from junior Sydney Turner for two points in the paint, followed by a 3-pointer before the first half expired to give Saxony a 33-26 lead.

“[Brune] is hard to corral one-on-one,” Saxony head coach Sam Sides said. “She’s either going to be stronger than you or quicker than you. A few times she was oversized and West County knocked [the ball] back at her, but she’s got a lot of fight in her. She’s hard to stay in front of because she can attack the bucket because she’s so strong and determined.”

Fellow Saxony seniors Olivia Spanley and Makayla Mueller had impressive nights in their own right as Spanley recorded another double-double with 19 points and 14 rebounds, while also recording two steals. Mueller was the only other Crusader to reach double digits with 10 points and also finished second in rebounds with seven along with two assists.

Spanley had recorded 11 of her team’s 33 first-half points, but she was held to only two in the third quarter. Mueller was able to step up scoring wise during the third frame as she came up with seven points with the final two being a buzzer beater, which gave Saxony a comfortable 50-39 lead heading into the final quarter.

“That was big for momentum,” Coach Sides said. “[Mueller] struggled taking care of the ball tonight, but she’s a good shooter — a good, smart player. She is a good defensive player, and she is a playmaker. How [our seniors] go, we go, so it was great for her to see how well she can play down the stretch. Basketball is a game of runs, and we had a couple there and got separation.”

Spanley made up for her third-quarter scoring troubles by putting up six in the fourth as four of those points came from the free-throw line. Spanley drawing fouls and getting to the line helped the Crusaders ice the game because West County was basically unable to foul after they reached double bonus.

“Olivia is kind of deceptive — she doesn’t look like she’s going full speed all the time, but she’s determined and has a lot more fight in her [than you think] because she doesn’t show a lot of expression,” Coach Sides said. “Her play shows that she has a lot of fight in her, and she’s a big part of our success. She’s the only girl we have with any size, and I thought she had one of her better all-around games tonight.”

Only two other players for Saxony recorded points as Turner finished with four on top of four assists along with one rebound and steal. The fourth-leading scorer for the Crusaders was their sixth woman in junior Maddox Murphy, who hit a shot from beyond the arc and scored all six of her points in the final eight minutes.

Murphy helped continue Saxony’s now 10-game streak of hitting at least five or more 3-pointers collectively as a team. In the district semifinals against Fredericktown, Murphy led all scorers and finished with a career-high 18 points while hitting two triples.

“I was about ready to choke [Murphy] when she shot that three over there, but she made it,” Coach Sides joked. “I was telling her we wanted to get a high-percentage shot because the pressure was on [West County] to stop us. She made a big shot, and it makes it that much more difficult for them to catch you. I tell them, ‘If you think you can make it, shoot it.’”

The leading scorer for West County was 5-foot-11 junior forward Dori McRaven, who scored 22 points and hit a game-high five 3-pointers. Saxony held every other Bulldog to under 10 points as senior forward Madelyn Whitter paced McRaven with nine and went 6-for-8 from the free-throw line.

“We knew coming in we had to stop [McRaven],” Brune said. “She’s a really good shooter. She can shoot off the dribble and not many players we face can do that, so we knew we had to focus on her. I thought we did pretty well on her, but I’m just really happy with how we played.”

On top of Saxony’s senior class going out as four-time district champions, this is the eighth and final district title for Coach Sides in his time with the program. At the beginning of the year, Sides didn’t believe his team would be as far along as it is now.

“I wasn’t sure if we were going to have enough to compete at that level or not, but we got better and better as the year went on,” Coach Sides said. “I’m really happy with our effort and determination, and that’s what we have to have to compete.”

The Crusaders will now face Doniphan (22-7) in the Class 3 Sectionals tonight at Dexter High School, which is a team that defeated New Madrid County Central (20-7) 54-53 in the Class 3 District 1 title game.