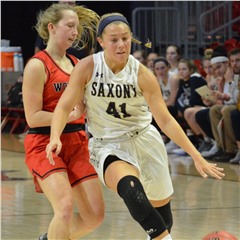 Saxony was without head coach Sam Sides, who could not be in attendance due to medical reasons. The Crusaders also lost a role player off the bench in sophomore guard Emma Voelker, who suffered a torn meniscus in the junior varsity game.

Coming off an overtime road win over SEMO Conference opponent Sikeston at 75-68 on Monday, Saxony (8-3, 1-0 SEMO) needed another extra four minutes to pull off its third-consecutive victory and defeated the Eagles (9-3) 73-68.

Stepping up as the team’s interim head coach was assistant coach Max Wieser, who is already a head coach for Saxony as he oversees the cross country and track and field programs.

“The more you get in those [close] games the better,” Coach Wieser said. “Tonight wasn’t as stressful in the last minute — we weren’t down by so much — but it’s the same scenario. … It’s the belief we should now have that we’re never really out of it.”

One of the key reasons why Saxony was able to come back and defeat New Madrid was narrowing down turnovers after suffering a total of 23 throughout the game. This was in large part because of the full-court defense the Eagles used to pressure Saxony’s offense once the ball was inbounded.

Three Crusaders recorded four or more turnovers in the game as one of Saxony’s starters junior forward Sydney Turner had a total of seven. She did, however, total four defensive rebounds.

“[New Madrid] attacked really hard with their top two in the press, so I was really trying to get [our players] to skip those and get the ball over the top. Their back defenders in their press came up more than they had when I scouted them, so we really had to work it back in and try to get the ball in the middle.”

The Crusaders were led by none other than senior guard Emma Brune, who finished three points shy of her career-high 34 points at 31 to lead all scorers. Brune scored 13 of her points from the free-throw line on 17 attempts (76%), while she also recorded four rebounds, two assists and one steal.

Brune sent the game into overtime when she tied the score at 61-all off a free throw with seven seconds left after being fouled in the post following a timeout by Coach Wieser. Wieser knew he had to get Brune to the free-throw line if they were going to have a chance to come out with the win.

“I think you could just tell Emma knew that there’s going to be times where she just has to create some offense,” Coach Wieser said. “A team that is that aggressive, you’re not just going to be able to throw the ball around easily. … Obviously we had to take a good shot after the timeout — we couldn’t wait. I said, ‘If we don’t have that open shot, we have to get the ball to someone that can drive.’”

Pacing Brune in most points scored for Saxony was fellow senior center Olivia Spanley, who scored 18 and came down with a game-high 16 rebounds before fouling out in the fourth quarter. She also had the most steals for the Crusaders with three.

“Everything was a scrap — nothing was easy,” Coach Wieser said. “We maybe had two or three little dishes where we had an easy layup, but everything else was a fight. Just the way [Spanley] goes after missed shots — especially on the offensive end — when she senses she might get a bucket after it, she really goes after it hard.”

No one on Saxony outside of Brune and Spanley scored in double digits, but two late 3-pointers from junior forward Alice Hogendobler propelled the Crusaders to take the lead over New Madrid, 60-59, with a minute left in the fourth quarter.

Hogendobler had only scored two points the entire contest before knocking in both of her triples within 30 seconds, but she also managed to record two steals.

“I’ve never seen Alice slow down,” Coach Wieser said. “She’s a confident shooter and sometimes she rushes it, but she’s always ready to make the next one. She’s not one that’s like, ‘OK, I missed a couple. This next one is going to be a miss.’ She’s made two [triples] now in dire situations — she’s come through.”

Tying Hogendobler with eight points was senior guard Makayla Mueller, who hit one 3-pointer in the first half and went 5-for-6 from the free-throw line (83%). Mueller also dished out four assists and had two steals of her own.

Seeing more minutes in place of Voelker was sophomore forward McKenna Webb, who finished with four points and four rebounds while coming off the bench.

Leading New Madrid in scoring was junior guard Shakyra Wright, who finished second in scoring behind Brune with 26 points but failed to score in overtime.

The Eagles had one player thrown out of the game in overtime as sophomore Jimmya Caldwell-Newson received a technical foul after shoving Mueller to the ground when Saxony led 71-68 with under 10 seconds left.

If Saxony and New Madrid win their respective district, the teams could play again in the Class 3 Sectionals.