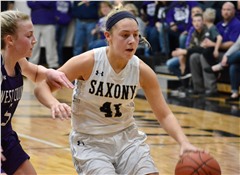 For the fourth-consecutive and final time in her career, Saxony Lutheran girls basketball senior Emma Brune was named all-district as the top selection from this year’s Class 3 District 2 teams.

Brune recorded a total of 68 points, 15 steals, 14 rebounds and seven assists while shooting 62.5 percent from the field and went 15-for-22 at the free-throw line (68.1%) in the district tournament. While doing so, Brune helped the Crusaders win their eighth-straight district championship and became a four-time district champion in her own right.

Also named to the Class 3 District 2 All-District Team for Saxony was fellow senior Olivia Spanley, who finished with a total of 43 points, 31 rebounds, nine steals and eight assists in districts. Spanley also shot 66.6% on her field goal attempts to help garner all-district honors for the first time in her career.

In the Class 3 District 2 Tournament, the Crusaders outscored opponents 279-170 as they won each game by double digits.

No. 1 seeded Saxony first defeated No. 8 Clearwater by a score of 86-40 in the first round of districts, where Brune recorded what would be the fifth and final 30-point contest of her career by leading all scorers with 33. Spanley paced Brune with 11 points, while also coming up with a game-high six steals.

Brune only managed to produce 10 points against No. 5 Fredericktown in the district semifinals, but three of her fellow Crusaders including Spanley (13) finished in double digits. Spanley also hauled in 13 rebounds.

In her four and final district championship game, Brune scored a game-high 25 points and six steals in Saxony’s 64-52 win over No. 2 West County. Spanley paced Brune with 19 points of her own and also had 14 rebounds for another double-double.