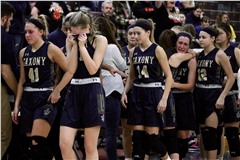 Heartbreaking can define the Saxony Lutheran girls basketball team’s 52-46 loss to Licking in the Class 3 Quarterfinals on Saturday, but that is not how one could define the Crusaders season.

Saxony (18-12) overcame injuries and illnesses to both players and head coach Sam Sides alike in order for the team to win an eighth-straight district championship and reach the quarterfinals for the seventh year in a row.

The only basketball program in the Southeast Missouri area that matches the Crusaders continued success is the Charleston boys basketball team, which recently won its 10th-straight district title and is heading to state for the third-straight season.

Saturday’s quarterfinal was the end of two Saxony girls basketball eras as it was the final game for the program’s all-time leading scorer senior Emma Brune and Coach Sides. Brune also holds 13 other program records for Saxony, while Sides has been at the helm for the past nine seasons and also led the Crusaders to two final-four appearances.

“We played hard and showed a lot of heart, but we just made a few mistakes” Coach Sides said. “… I’m sad it’s over, but like I’ve been telling everybody, I’m very thankful for it to have happened. Don’t be sad it’s over, just be thankful that it happened — that’s the way I feel about it.”

Brune played and started in her first high school basketball game on November 22, 2016, and in her last one she led all scorers by putting up 20 points against Licking and scored eight in the third quarter alone.

The Wildcats zone defensive scheme made things difficult for Saxony’s offense, which thrives off scoring in the post with Brune and fellow senior Olivia Spanley. However, both players were able to create opportunities for themselves as Brune often used her athleticism to get in position for pull-up jumpers.

“Their size is hard to deal with, and we tried to maneuver through that,” Sides said. “We missed quite a few open looks early, but we made a few. Athletically, I think we’re better than they are, but their size was hard to deal with.”

Brune was also tasked with guarding the likes of Licking senior Karlee Holland, who has already signed to continue her basketball career at Three Rivers and scored 33 points against Saxony in this game last year.

Holland only finished with 18 points against the Crusaders this year, but she was forced to sit out a portion of the game after suffering an injury to her right leg with four minutes and 15 seconds left until halftime.

“I’m not sure what happened there, but [Holland] is kind of hard to read,” Sides said. “She shows a lot of drama in her fouls, so it’s hard to tell if she really was hurt or what the deal was. I’m really thankful that she got to play, and I told the girls, ‘You have to keep playing.’”

Saxony held a 15-9 lead over the Wildcats when Holland had to be helped off the court, but Licking was able to make it a three-point game before heading to the locker room at 20-17. Sophomore Kylie Taylor hit a pair of 3-pointers for the Wildcats as Crusaders junior Maddox Murphy was able to answer with one of her own to prevent the game from being tied.

Holland started the second half on the bench, but she was able to make a return, which resulted in the game being a back-and-forth contest until the final minutes. Brune and Holland traded buckets in the second half, whereas Holland produced 13 points and hit two triples along with a pair of free throws to help give Licking a comfortable lead.

Brune scored a total of 12 points in the final half of her career and even scored the final points for Saxony this season. She also finished a perfect 4-for-4 from the free-throw line.

“[Brune] is really undersized for her position, but she plays everywhere,” Coach Sides said. “She’s a gamer and is one of the most competitive people I’ve ever coached. She’s going to give you everything she’s got, and she’s either going to be stronger or faster or quicker than most people she plays against.

“She’s just a great player — if she were six foot tall, she’d be a big-time [college basketball player] in my book. She’s a good defensive player and very coachable kid.”

Spanley was the only other Crusader besides Brune to reach double digits as she finished with 10 points of her own on top of 13 rebounds with seven coming on the defensive end and six offensively.

Murphy and junior Alice Hogendobler each tied for six points as they combined for four triples, while Saxony’s third and final senior Makayla Mueller scored four. Mueller paced Spanley in rebounds with seven and had a team-high seven assists, while Brune finished with four boards and a team-high three steals.

For next season, Saxony returns starters Hogendobler and Turner along with Murphy, who finished as the team’s third-leading scorer behind Brune and Spanley.