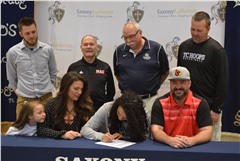 McWilliams said one of the reasons why she chose to sign with MAC is because of how many players from the program transfer and continue to play at four-year schools.

“I do want to play further on — I don’t want to stop here,” McWilliams said. “I want to keep going, so knowing that [MAC head coach Gary Koch] has coached players to that level is one of the main reasons I picked this school because I want to go that far.”

In her senior season with Saxony, McWilliams helped lead the Crusaders to their sixth-straight Class 3 District 2 Championship as well as the state quarterfinals. She did so by averaging 12.4 points, 4.2 rebounds, 3.6 assists and 2.9 steals through 26 games.

McWilliams was honored following the season by being named to the SEMO All-Conference first team as well as earning Class 3 District 2 first team All-District honors.

“To me as a coach its always gratifying to have a player that is good enough and wants to play at the next level and gets the opportunity to do that,” Saxony head coach Sam Sides said. “I’m looking forward to the next step in her life to play in college.”

One of the main reasons why McWilliams chose to play at MAC is because she knows and has played against many of the players on the roster ranging from Arcadia Valley, Doniphan and Sikeston.

McWilliams also likes the experience Coach Koch has with the game of basketball, who recently finished his 13th season with the program. Before that, Koch coached at Jefferson College for six seasons.

McWilliams sees similarities between both Koch and Sides with their basketball knowledge and how confident they are coaching wise and in her as a player.

Koch has led the Cardinals to two Region 16 Championships in the last four years. The team also had the Region 16 Player of the Year on its roster this season in freshman small forward Holly Forbes out of North County.

Koch thinks McWilliams is a perfect fit and said his program gets players who are “above the cracks” rather than falling through them.

“[The players we get] aren’t just basketball players — they are the total package,” Koch said. “I like [McWilliams’] aggressiveness on the court and the fact that she’s a good student is the kind of kid we’re looking for.”

One of the players returning to next year’s team is Tyeshia Mitchell out of Sikeston, a player who Koch thinks McWilliams will blend with.

Coach Koch said through his program he and his staff have always been able to “coach kids up,” turning players who barely had any scholarship offers coming out of high school into Division-I athletes.

Koch said it depends on the player and that McWilliams has what it takes, especially when it comes to talent.

Heading into college, McWilliams said she will be focusing on improving her 3-point shot as well as her ball handling.

“[Ball handling] is what I really want to showcase [in junior college],” McWilliams said. “Other parts of my game I’m pretty confident in, but those are both things that need improvement.”

During her time with Saxony’s basketball program, McWilliams did not see much time on the varsity team due to a strong class of players that graduated in 2016.

That group was able to lead Saxony to the Class 3 State Championship game before McWilliams and the rest of this senior class took over.

McWilliams said it was a great experience for her going against that team in practice even though Coach Sides said they often were “beat up.”

“Getting beat up is honestly sometimes a good thing for you because you learn how to not get beat up as bad,” McWilliams laughed. “I think it helped us in our last two years. We worked harder because of what they put on us, and we wanted to live up to their name.”

Fellow seniors Addison Beussink and Laurel Mueller each earned Class 3 All-State honors as Beussink did so this year with Mueller garnering the honor in 2016-17.

“Honestly, winning districts was a big thing for us because we thought a lot of people doubted us with all of those girls missing,” McWilliams said. “Getting to quarterfinals both years was a big accomplishment. I think we’re really proud of ourselves and how far we did get. Continuing that [district championship] streak is a great feeling, and I’m glad I left Saxony with that.”

Looking back at her past four years attending Saxony, McWilliams first talked about how she will miss Coach Sides.

“Whenever [a coach] is a part of your life for four years and they are basically the reason you’re going to college — it’s pretty sad [leaving],” McWilliams said. “I’ve learned how to work hard and how to put everything I have on the line for my team.”

“She fought in the tough games, and to me that is the great attribute she has,” Sides said.