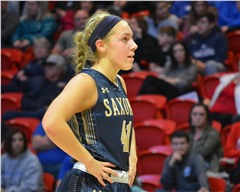 She scored five in the first quarter alone, and it only took two minutes in the second quarter for Brune to score her eighth point of the night and the 1,000th of her career.

Brune and fellow junior Makayla Mueller double teamed Cape senior Abigail Leimer, who tried to get a pass off, but it was tipped by Brune. This tip allowed senior Zoie Roth to steal the ball and pass it to Brune, who then had a clear path to the basket for a layup and scored the two most celebrated points of her career.

“It was a pretty easy shot,” Brune laughed. “I realized that [I reached 1,000 points] once coach called a timeout. I was just super happy, and it was an honor to get it.”

This was not only a special moment for Brune and Saxony, but specifically for Brune’s family. Cape is the same school where Brune’s mother, Jenny Foeste Brune, also reached the 1,000-career point mark back when she played for the Tigers.

“That’s really awesome,” Brune said. “I mean my mom was an amazing player, and to have it at the same school she got it was really cool.”

Brune joins former Crusaders Brianna Mueller, Grace Mirly and Raegan Wieser as the only players to score 1,000 points for Saxony as Mueller is currently No. 1 on the list with 1,819. Mueller, Mirly and Wieser were all on the same team. Mirly is second with 1,271 and Wieser third at 1,169.

Before Brune was in high school her sister, Maddie, played with Mueller, Mirly and Wieser, so it was special for Emma to reach the same mark they had.

“It’s an honor — I practically saw them end their career with my sister,” Brune said. “They were at my house all the time, so it’s really cool to be with them in that 1,000-point club.”

Below these four players on Saxony’s all-time scoring list are three of Brune’s former teammates. Addi Beussink, who now plays for Webster University, is fifth on the list with 761 points, Masyn McWilliams, who plays for Mineral Area College, sixth at 751 and Laurel Mueller seventh at 718.

With all of Brune’s senior season left along with at least nine more games promised this season, she is on pace to break Mueller’s scoring record and become Saxony’s all-time leading scorer.

“That’s awesome because Brianna is a great player, so to be up there with her is awesome,” Brune said. “It’s a really cool honor.”

Saxony’s eight-year head coach Sam Sides has had the privilege of coaching nine of the program’s top 10 scorers.

“Emma is a just warrior — she battles, battles and she can take the ball to the basket,” Sides said. “She’s not very big, but she’s pretty strong and there aren’t many girls stronger than she is.

“… [Scoring 1,000 points] is a big milestone for her. She’s been starting for me since she was a freshman, and she’s taken on more of a leadership role. She’s a great person to coach, no doubt.”

“I think it’s been our team chemistry, and we’re all best friends,” Brune said. “We play with each other on the court, and it really shows. We share the ball really well, and I think that’s what helps us.”