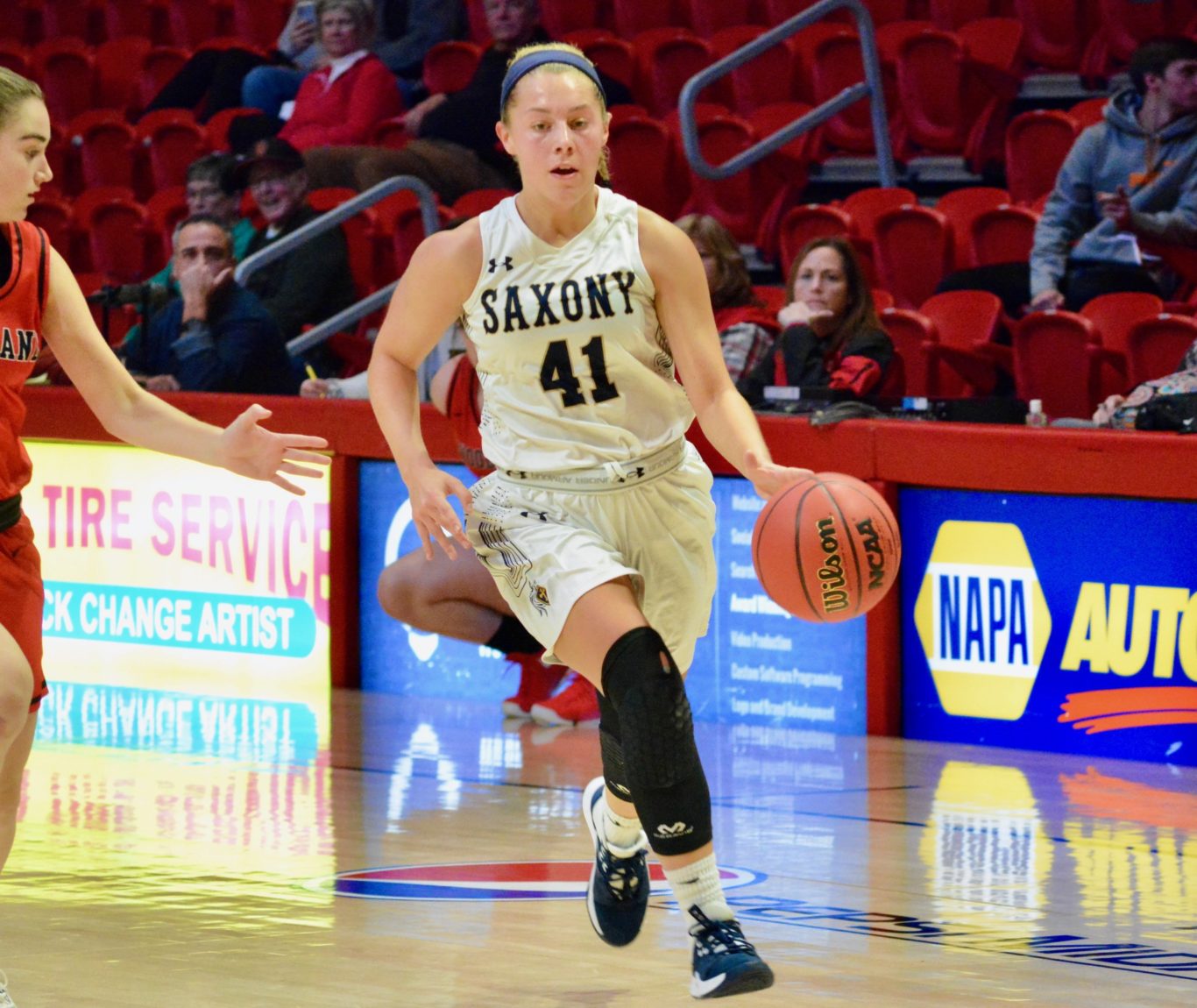 For the second-straight tournament this season, the Saxony Lutheran girls basketball team took third place as the Crusaders managed to do so in the 39th Annual Hillsboro Invitational last week.

Much like in the First State Community Bank Holiday Classic when Saxony fell to Jackson 59-54 in the semifinals, the team fell by six points to Freeburg at 70-64 in the semifinals of the invitational Thursday night.

The Crusaders followed up the loss with a 21-point, 63-42 win over Class 5 Seckman in the third-place game Saturday, where Saxony had three players finish in double-digit scoring. Those three were Saxony’s only three seniors in guards Emma Brune and Makayla Mueller and center Olivia Spanley as they combined for 49 points.

“We were a little fatigued [against Seckman],” Saxony head coach Sam Sides said. “We put our heart and soul [into playing Freeburg] and came up short, but [against Seckman] we had to battle, and we still struggled. We adjusted our defense a little bit.”

The defensive adjustment Coach Sides made was by putting junior forward Sydney Turner one-on-one against senior forward Makayla Parton, who scored 17 points through three quarters. After Turner started guarding Parton in the post, Parton did not score once in the final 13 minutes.

Leading the game in scoring was none other than Brune, who recorded her 14th 20-point performance of the season with 20 and also finished with a game-high nine assists. Brune also came down with five rebounds and three steals.

In the semifinals against Freeburg, Brune broke her own single-game, career-high program record 34 points by putting up 35, while she also recorded six rebounds, four assists and four steals.

Coach Sides said he gave Brune a few days off from practice last week heading into the Hillsboro Invitational since she has been dealing with fatigue and soreness.

Brune was rightfully named to the Hillsboro Invitational’s All-Tournament Team along with Spanley, who also broke her own single-game, career-high in the tournament with 24 points in Saxony’s 63-26 win over Alton in the first round.

Spanley paced Brune with 19 points against both Freeburg and Seckman, while she recorded a double-double in the win over the Jaguars with 13 rebounds.

“Olivia is very deceptive,” Coach Sides said. “[Against Freeburg], she took one coast-to-coast. … She’s got a long stride and long arms, and she can get around you and finish as well as anybody. She’s got pretty nice touch around the bucket.”

Coach Sides compared Spanley to one of his former Class 3 All-State players and current Webster Gorlok Addison Beussink because of her ability to slip past defenders and score. Sides said what separates Spanley from Beussink is that she can score with either hand.

Mueller was the only other player for the Crusaders to score double digits in the tournament, which did not happen until the third-place game against Seckman, where she scored 10 points. Mueller hit two of Saxony’s five 3-pointers in the contest, while she also dished out four assists and had two rebounds.

“[Mueller] is very much capable of scoring. She can beat you off the dribble, she can make the three and she gets to the free-throw line,” Coach Sides said. “We need her to step up her game — we need her to score 10 points a game for us to be successful.”

Brune also hit one of Saxony’s shots from beyond the arc as juniors Turner and guard Maddox Murphy made the other two. Murphy and Turner finished with five points apiece.

“We made some outside shots for once,” Coach Sides said. “At one point, we were up by one. The next thing I look up — we were up by 15, so [a game] can change in a heart beat if you make plays. We just have to keep plugging, and we cannot let up.”

As a team, Saxony recorded a total of 26 rebounds as Turner finished with three, while freshman forward Abagayle Britton came down with two boards and scored four points off the bench.

The Crusaders have been forced to rely on freshman talent as of late due to injuries and illnesses, but junior forward Alice Hogendobler made a return in the invite after missing four games with a back injury. Hogendobler suffered her injury after taking a hard fall against Miller Career Academy on Jan. 13.

Hogendobler, who started the first 12 games of the season before getting injured, failed to score in the tournament, but she played limited minutes because Coach Sides said she is still not 100%.

“[Hogendobler] is not 100% by any stretch of the imagination,” Sides said. “She’s battling and doing what she can do, but it’s going to take her awhile. We want to try to ease her back in there, and hopefully by the end of the year she’ll be back to what we expect from her.”

Saxony was also without two key role players against Freeburg and Seckman as sophomore forward McKenna Webb sat out with an illness, while sophomore guard Emma Voelker has been out with a torn meniscus for the past nine games. Coach Sides hopes Voelker can make a return by the end of the regular season, but he still needs players like Britton to continue making an impact.

“[Britton] is pretty athletic, so if she can go in there and give us some rebounds and four points — that’s four points we haven’t been getting,” Sides said. “I’m working on trying to get her to be more under control and finish her shot. Her mechanics aren’t too bad shooting threes and free throws, but when she drives, she has a hard time finishing because she’s a little out of control.”

Saxony advanced to 11-8 overall with the win over Seckman, and the team only has five more games left in the regular season before the Crusaders defend their seven-year streak of winning a district championship.

The Crusaders are also still competing for the SEMO Conference Regular Season Championship and are currently 2-1 in conference play and 12-8 overall. Saxony will host Cape Notre Dame (15-2, 4-0 SEMO) on Thursday.