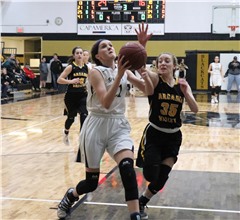 When Saxony Lutheran’s girls basketball team reached the Class 3 State Championship game back in the 2015-16 season, head coach Sam Sides did not know how successful his team would be following that year since he lost eight players to graduation.

Sides did believe his team could still contend for a district championship. He was spot on with his prediction.

On Friday, Feb. 23, the No. 1 seeded Lady Crusaders defeated No. 2 Arcadia Valley 52-37 to win their sixth-straight Class 3 District 2 Championship.

“That’s pretty special because I’ve coached for a long time and didn’t win anything, but then you have runs like this,” Sides said. “You’re blessed to have good kids back-to-back-to-back. They just kind of pass the baton to the next group and say, ‘There it is. Go get it.’”

Leading the way for Saxony in this year’s title game was senior center Addie Beussink, who recorded her second double-double of the tournament with 14 points and 15 rebounds.

Eight of her rebounds were offensive as she sometimes struggled to score off the putback, but she was able to take over the game in the second half when she scored 10 points and had eight boards.

“When she attacks a lot of times she has a hard time finishing,” Sides said. “She has an unorthodox shooting style since she kind of shoots sideways, but it’s also hard to defend.”

At halftime, Saxony only led the Tigers 21-16 as senior guard Laurel Mueller and senior forward Masyn McWilliams were tied with a team-high six points.

One key problem the Lady Crusaders had in the first half was shooting from beyond the arc as they finished 14 percent from three-point range.

“I think we were either nervous or overhyped or over-confident because we didn’t play our best basketball, and your opponent has a lot to do with that,” Sides said. “Sometimes we struggle to score. We get impatient and just have to work the ball, and we have good size.”

Coach Sides said his team did not attack the paint as much as it should’ve in the first half to get shots in the post or for his players to get to the free-throw line.

Saxony’s defense was able to hold Arcadia Valley to under 20 points in the first half with the help of its full-court pressure and stealing ability by forcing 13 turnovers before halftime and 18 for the game.

Beussink and McWilliams finished tied for steals with three a piece as Beussink was also able to reject three shots.

“Our defense most of the time picked up and got us some turnovers for some easy buckets,” Coach Sides said. “That’s what you have to do if you’re not making perimeter shots, you have to find offense in other places.”

The defense also switched to a box press in the second half, which the players recommended to Coach Sides.

This allowed the Lady Crusaders to start the third quarter with a 11-0 run, which was fueled by rebounds, steals into fastbreak opportunities and a Mueller pull-up jumper.

Mueller finished with 10 points in the game as eight came from her shot off the dribble, which Sides said makes her one of the most dangerous weapons in southeast Missouri.

“She is hard to defend, and she’s quick enough and has enough ball skills to where she gets in the paint and pulls up, she can make that 10 to 12-footer,” Sides said. “You just don’t see girls that can do that. That’s just a gift she has, and she’s helped us all year long with that.”

The Tigers were able to answer Saxony’s 11-0 run in the third quarter when the team’s leading scorer in junior Josie Landrum hit one of her four three-pointers of the night to make it 32-19 with under five to go.

The Lady Crusaders only managed to hit two threes in the game with the first coming from junior guard Macey Smith in the first half. The second was from sophomore guard Emma Brune, who answered Landrum’s shot from beyond the arc as well.

Brune scored three more points, two from a putback and one from the line to create a 6-0 run all by herself for Saxony to take a 38-19 lead.

Saxony continued to have easy opportunities scoring in the paint as senior guard Courtney Kester made her lone shot of the game off a layup to start the fourth quarter for a 42-23 lead.

The next eight points for Saxony were scored after an offensive rebound starting with Beussink, who scored six to give her team a 50-27 lead with just under three minutes remaining.

The Lady Crusaders now look to the Class 3 Sectionals where they will face District 1 Champion New Madrid County Central this evening at Dexter.

Saxony was able to advance to the quarterfinals last year with a 48-30 win over Kennett, so Coach Sides hopes his players can improve on giving their maximum effort in each game from here on out.

“I didn’t think [the effort in this game] was up to our standard,” Sides said. “We can play better, and we can play harder. We have room to go, and you want to keep climbing because you’re going to have to play your best game to beat some of these teams.”