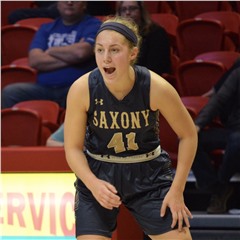 The Saxony Lutheran girls basketball’s overall record was under .500 at 1-2 after the SEMO Conference Tournament, where the Crusaders placed fourth overall after falling to Poplar Bluff 55-23 in the third-place game two weeks ago on Dec. 5.

One of the main reasons why Saxony fell to Poplar Bluff by 22 points was because it was without leading scorer senior guard Emma Brune, who was under concussion protocol. She is averaging a team-high 21 points per game while shooting a team-best 63% from the field.

The returning Class 3 All-State honoree returned to action on Dec. 9 as Brune led the Crusaders to a 63-54 road win over Chester, followed by a 66-50 defeat of Anna-Jonesboro in their first home game of the season Thursday.

“[Anna-Jonesboro] impressed me — they were a hard playing team and caused us some problems,” Saxony head coach Sam Sides said. “I thought we matched their physicality, and we shot the ball better than we have been. Our defense is pretty good, and we shut them down somewhat.”

“Emma can play everywhere,” Coach Sides said. “I play her inside and outside because we need her to do everything. … I try to give her a couple breaks, but we need her on the floor against tough competition. She’s our best ball handler and is a good rebounder for her size. She can shoot, and she can penetrate. She’s also a good defensive player — she just makes us go.”

Also contributing on the offensive end has been the likes of senior forward Olivia Spanley as she produced 13 points in both contests and recorded 12 rebounds against Chester for a double-double.

“[Spanley] is really coming into her own — she’s been more physical than she has been [in year’s past],” Sides said. “We’re going to need that more out of her because with her slide step and long arms, she’s hard to guard.”

Another Crusader to be reckoned with has been junior guard Maddox Murphy as she was able to produce 24 and hit four 3-pointers in last week’s contests — all while coming off the bench. She also combined for five rebounds and four steals.

“[Murphy] is getting a little bit better, but she got a little out-physicaled a few times out there and aggravated,” Coach Sides. “She’s coming along, and she just has to match the other team’s physicality. She hasn’t played a lot of varsity and the speed of the game is something she’s going to have to deal with.”

Against Anna-Jonesboro, Saxony made a season-high six shots from beyond the arc as Brune and Murphy each hit two. Junior forward Alice Hogendobler and senior guard Makayla Mueller also added one triple apiece.

“Sometimes it seems like we shoot a little quickly, but I tell them we have to work on recognizing when we should shoot the ball, but for us to be successful, we’re going to have to make [3-pointers].” Sides said. “That has to be our identity as far as scoring because we’re not going to get a bunch inside against a good-sized team. … We have three, four or five girls who can make them on any given day.”

The Crusaders are also running a zone-style defense this year versus man-to-man, which has been the scheme Coach Sides has gone to in the past. He said this is because the team overall is not quick enough to play man.

“[With zone] we try to get more help out of it and cause a little confusion, but hopefully to get in better position to force people away from the bucket,” Coach Sides said. “We’ve changed it up a little bit between my 10 matchup, which is more of an odd front.

“We also play a 12 match-up, where we keep our post players in the middle. Otherwise we cover from corner to corner, and we give up some shots that way, but hopefully we don’t allow much in the inside game.”

Before the game against Anna-Jonesboro, all of the Saxony players on varsity and junior varsity presented Christmas gifts to Wildcats sophomore Marlee Smith.

The Crusaders did so because Smith, who was diagnosed with Leukemia in March and is now finished with chemotherapy, has started a toy drive for kids at Cardinal Glennon. Smith is also a member of TC Hoops, which several players from Saxony play on as well.

“I thought it was a good thing for our kids to show support for a neighboring player,” Coach Sides said. “I felt good that they were concerned with somebody besides themselves. It’s part of the deal that we need to give to other people and support them, and I tell them every day, ‘We’re extremely blessed. I don’t ever want to see you feel sorry for yourself when people have hardships like that.’”

Saxony has been seeded third in this year’s First State Community Bank Holiday Classic and will face Woodland tonight at the Show Me Center. The Crusaders have won the tournament the past two years.