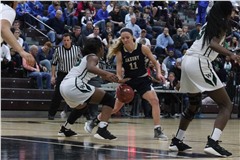 The Saxony Lutheran girls basketball team came short of reaching the Class 3 Final Four for a second-straight season as the Lady Crusaders fell to Whitfield in the quarterfinals.

This was the same opponent that ended Saxony’s season last year as junior guard Aijha Blackwell scored a game-high 23 points to lead the Warriors to a 59-43 win.

“I watched [Whitfield] play earlier [this season] against Notre Dame, and I didn’t think they were as good this year as they were last year,” Saxony head coach Sam Sides said. “That’s the best game I’ve seen them play. They shot the ball so well, and we had to have help, but they were just too big and strong inside for us to do much.”

Blackwell ranks as a four-star recruit and is 19th overall prospect in the 2019 class according to ESPN.com.

Also scoring in double digits for Whitfield was senior guard Taylor Lawson-Hicks at 14 and junior guard Nia Griffin with 13.

Only two players scored in double digits for the Lady Crusaders as senior forward Laurel Mueller and sophomore guard Emma Brune scored 10 each.

Saxony’s third leading scorer was senior center Addie Beussink, who was only able to score seven points in the post while coming down with 12 rebounds.

“We did a pretty decent job on the boards for the most part, and we made a run and made some shots,” Coach Sides said. “Then I think we had three-straight turnovers where we went from being down six to 13 in a heartbeat.”

Also having trouble scoring was senior forward Masyn McWilliams. She finished the game with only three points, shooting 13 percent.

“We get most of our points in the paint, and we couldn’t score in the paint against them,” Coach Sides said. “We’re not a consistent enough outside shooting team to compete. We had some there in stretches, but [Whitfield] shot well outside and inside.”

As a team, Saxony finished with a shooting percentage of 33, going six-for-13 at the free-throw line and three-for-10 beyond the arc.

The Warriors took a 5-0 lead early on as Griffin scored off an offensive putback, which created urgency for the Lady Crusaders.

Mueller started Saxony’s 6-0 run as she hit one of her patented shots off the dribble to make it 5-2 with a little over six to go.

Junior forward Briann Jenkins came off the bench to provide the final two points in Saxony’s run to give the Crusaders the lead at 6-5 with 3:20 left in the first quarter.

Whitfield regained the lead 10 seconds later and didn’t look back as the Warriors took a 15-6 lead after one.

Whitfield turned its nine-point lead into a 12-point contest heading into halftime at 29-17 as the Crusaders were able to go on a 4-0 to end the second quarter.

McWilliams scored one point off a free throw for the first points of the second half before Whitfield extended its lead to 32-18.

This was after Blackwell left the game with an apparent ankle injury at the 4:38 in the third.

Lawson-Hicks had just hit a three to give Whtifield a 14-point lead, but Saxony answered with a three of its own as senior guard Courtney Kester hit her lone shot.

The Crusaders made it a seven-point game, 34-27, with 1:41 to go in the third, forcing Whitfield to take a timeout.

Blackwell returned to the game following the timeout as Whitfield made two three-point plays in a row to follow.

The Warriors ended up outscoring Saxony 19-13 in the fourth and final quarter for an eventual 59-43 win, bringing the Crusaders season to an end with an overall record of 25-5.