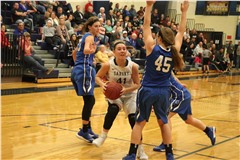 The No. 1 seeded Saxony Lutheran girls basketball team (3-1) fell to No. 2 seed Dexter (3-0) by just one point at 53-52 in the championship game of the annual SEMO Conference Tournament on Thursday, Nov. 30, at home.

The Crusaders only had two players score double digits in senior forward Masyn McWilliams and senior guard Laurel Mueller, who each put up 11 points against the Bearcats.

Saxony’s leading scorer, sophomore guard Emma Brune, did not score her first points of the game until the second quarter, where she played a significant role in cutting Dexter’s lead.

At the end of the first quarter, Dexter took a 17-13 lead over Saxony due to applying full-court pressure, which made passing difficult for the Crusaders.

“We worked on [going against full-court] yesterday where we worked on five against eight players,” Saxony head coach Sam Sides said. “You had to really work to get angles, but I can’t manufacture [Dexter’s] reach. We tried to go over the top way too many times. That’s just something we have to learn to get better.”

Saxony did take a 4-0 lead to start the game, thanks to McWilliams as she scored the first two points via layup then got the ball to Mueller off the inbound pass for a jumper.

This is one area where Saxony had success in the game, and Coach Sides said this is because of his team’s athleticism.

“We tried to get matchups with our forwards against their forwards away from the bucket,” Sides said. “We wanted to try and make them come out and guard us because the deeper we got the more advantage they had. We weren’t going to score much going over the top of them.”

The Bearcats took the lead with less than six minutes left in the first quarter and never looked back for the remainder of the first half.

Junior guard Chaylea Mosby scored six points in the first quarter off two three-pointers, which is where she continued to have success in the second quarter.

Mosby hit a three to start the second and soon after scored five more points to help Dexter take a 29-14 lead with four minutes, 20 seconds remaining in the half.

“We tried to jump switch when they [screened], but they have ways of getting [Mosby] open,” Coach Sides said. “If you try to go after her then they have isolation in the post, so that’s a dilemma because we just had to scramble and get to her the best we could.”

Saxony’s defense tightened up and Brune started to cover Mosby one-on-one, who broke Dexter’s 9-0 run with a steal for a layup on a fastbreak play.

The Crusaders only allowed four more points in the quarter with Mueller and Brune coming up with a steal a piece before halftime.

This helped Saxony make a 4-0 run to end the second quarter where Brune and McWilliams were involved on each scoring play.

Following the run, the Crusaders trailed Dexter 33-25 heading into the second half.

“I told them at halftime they just had to keep battling because a lot of teams would’ve folded up like a lawn chair and the game would’ve been over,” Saxony head coach Sam Sides said. “They battled through [trailing 29-14] because it’s hard for a team to keep stroking the ball like [Dexter did].”

To start the third quarter, Saxony applied full-court pressure on Dexter, which lead the Crusaders to make another run, this time at 8-0 to tie the game 33-all.

“I was going to do something different, and they brought to my attention we did that the other day, and that’s what they wanted to do,” Sides said. “We work on that every game, but I was going to wait longer to see how it went. I thought we confused Dexter a little bit because they weren’t sure how to attack that.”

The Crusaders also went to the zone defense instead of man-to-man in the second half, which was harder for Dexter to be able to set the screen for Mosby to shoot.

Saxony took the lead once again for the first time since the beginning of the game with 2:29 left in the third as Brune recorded another steal then drew a foul to shoot two.

Brune made both free throws for her team to take a 37-36 lead over Dexter, which the Crusaders further extended with their “big” lineup, which saw centers senior Addison Beussink and sophomore Gracie Price on the floor.

Another big difference in the game was putback shots, which Saxony had trouble making in the first half, but the Crusaders improved by showing more effort in the second, which is a key against a team like Dexter, Sides said.

“Fatigue plays a factor because you get a little tired,” Coach Sides said. “You’re a little bit slower, one step late and they get the ball and we don’t. Another factor as the year goes on we get in better shape, and that’s going to make us tougher, too.”

Saxony led 43-39 heading into the fourth quarter, but Mosby was able to give Dexter the lead off a three at 49-46 with 4:41 remaining.

The Crusaders got within one point at 53-52 with one minute left after Brune got the ball to Beussink for two, but the Bearcats held on for the win.

Saxony returns to play at home against Miller Career Academy on Thursday.