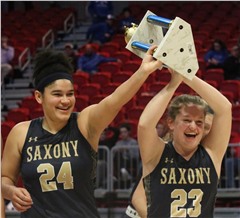 In the first meeting between the Saxony Lutheran and Cape Notre Dame girls basketball teams this season, it took the Crusaders four quarters to take the lead over the Bulldogs and place third in the SEMO Conference Tournament.

Saxony (9-1), seeded third in this year’s First State Community Bank Holiday Classic, took a commanding 13-point lead, 53-40, over No. 4 Notre Dame (9-3) after three quarters of play in the championship game on Dec. 19.

The Crusaders were able to do so after outscoring the Bulldogs 26-18 in the third quarter where Saxony hit four 3-pointers as sophomore Alice Hogendobler hit two off the bench.

Saxony Lutheran junior Emma Brune scored eight points in the third and hit one 3-pointer while also coming down with a 3-point play after driving to the basket for two and getting the blocking foul to shoot one more. Fellow junior Makayla Mueller made the final 3-pointer for the Crusaders and had another 3-point play to follow.

“That’s a good quarter, and we made shots, and we made plays,” Saxony Lutheran Head Coach Sam Sides said. “On defense we had some lapses, but we’re playing a pretty good team that can make you look bad at times. We turned the ball over too much, but you have to give Notre Dame credit on that.”

The Bulldogs were able to go on a 6-0 run to start the fourth, narrowing the Crusaders lead to seven points at 53-46 with five minutes left in regulation. However, Saxony increased its lead back up to 12 after a 5-0 run of its own.

With less than four minutes remaining, Notre Dame senior Julia Williams cut the Crusaders lead back down to seven at 58-51 after a 3-pointer and a steal for two more points.

The nail in the coffin for the Bulldogs and what helped the Crusaders capture their second-straight Holiday Classic Championships were free throws.

Notre Dame finished with more than 10 fouls in the second half, allowing Saxony to shoot multiple bonus free throws as the Crusaders made 12 of their 17 free-throw attempts in the final quarter.

Brune went 8-for-10 at the line in the quarter and was able to finish with a career-high 29 points. Brune recorded 20 or more points in each game of the Holiday Classic and now has seven 20-point contests this season.

“It’s pretty awesome — this was a pretty big accomplishment for us,” Brune said. “[Winning this tournament] was one of our goals.”

Senior Macey Smith also set a career-high in the title game as she finished with 13 points for Saxony. Fellow senior Cass Wunderlich paced Brune and Smith with 11 points of her own, who set her career-high of 18 against No. 2 Oran in the semifinals two days earlier on Dec. 17.

In the semifinals, Saxony was able to hold Oran’s leading scorer senior Leah Cauble to 20 points under her season average of 39 per game as she only came up with 19. Brune recorded a game-high 20 points while covering Cauble for most of the game when Saxony ran its man-to-man defensive scheme.

Only two players for Notre Dame finished with double-digit points to Saxony’s three as junior Riley Burger came up with a team-high 16 points while Williams was behind her with 15.

Both teams play a similar style of defense as each applies full-court pressure throughout games in order to create turnovers.

The Bulldogs used this style of play to upset No. 1 seed Jackson 53-35 in the semifinals, ending the Indians perfect season. Williams recorded 19 points against Jackson as Burger finished with nine while senior Megan Heisserer scored 10.

“[Notre Dame] is super scrappy, so we had to really make sure we took care of the ball,” Brune said. “They got a lot of steals off of us, but we had less towards the end so that helped.”

Coach Sides said he made sure his players went past Notre Dame’s defenders instead of trying to take the ball around two or three players.

The final score was 69-60 for the Crusaders to win the tournament for the fifth-time ever and the second time winning it back-to-back (2014, 2015). Saxony reached the Class 3 State Championship after winning this tournament in 2015.

“That’s what you’re playing for — my goal never has changed since I’ve been coaching,” Coach Sides said. “I want to be good enough at the end of the year to compete for a district championship. What happens along the way is gravy, but we’re trying to get to where we’re as good as we can be by the end of the year.

“We took a step tonight against a Class 4 program and Oran, which is a smaller school but they have a good program and good players. I think even if you lose these games they help you learn how to compete.”

“Emma is a hard nosed, competitive player,” Sides said. “You have to guard her all the time because she can beat you off the dribble; she’ll get steals and score; she can make 3s, and she can make her free throws.”