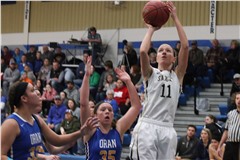 The Saxony Lutheran girls basketball team (11-1) displayed its dominance in this year’s Delta New Years Tournament by defeating each opponent handedly at 32 points or more.

The Crusaders finished the tournament by getting revenge over No. 2 seed Oran (7-3), as they defeated the Eagles 68-36 in the championship game on Jan. 4 to win their fifth Delta New Years title in the last six years.

This was the third-straight meeting between Saxony and Oran in the title game, with the Eagles defeating the Crusaders last year in overtime, 64-62.

“Well, I think our second game last year we played them and beat them by [29 points] — I think that really boosted our confidence,” Saxony senior guard Laurel Mueller said. “We realized it’s not necessarily a skill thing that peaked in, but it’s more of a mental thing for us. As long as we keep our heads in the game, hustle and show some effort then we can do it.”

Junior Leah Cauble was one key reason Oran was able to claim last year’s title as she scored a game-high 31 points. She remained as the game’s leading scorer this year, notching 28 of her team’s 36 points.

Cauble scored 16 of her 31 points from the free-throw line in 2017, but the Crusaders were able to not foul her as much this year, holding her to just 10 points off 13 total shots from the foul line.

“[Cauble] is hard to guard,” Saxony head coach Sam Sides said. “You can’t tell if she’s left handed or right handed — that’s always a sign of a good ball handler. She favors her left actually, and she shoots outside shots with her right hand, but she favors her left when she attacks the bucket.

“She’s hard to guard and hard to keep her in front of you. You have to have help on her, and we went man-to-man in the second half and Emma Brune did a pretty good job [guarding her]. She had some help, but she did a good job and we didn’t foul her as much.”

With Brune keeping herself busy using most of her energy guarding Cauble, she shot 18 percent from the field, but hit both of her free throws and two inside shots for six points.

Sides said shot selection and patience were two keys for the Crusaders defeating Oran because what turned into a 32-point win for Saxony was just a 10-point spread at halftime.

In the first half, the game was a back-and-forth battle through the first six minutes with Oran even gaining the lead over Saxony at 13-12 with around two and a half minutes remaining in the opening quarter.

This was in large partly because of Oran’s ability to come down with the rebound defensively, but Saxony was able to finally rebound the ball on offense for a score.

Jumping up for the offensive rebound and making the basket was junior forward Briann Jenkins, who finished second in scoring for Saxony with 11 points and came down with a team-high eight rebounds.

Jenkins’ first rebound for a successful putback shot allowed Saxony to regain the lead at 14-13, which was the beginning of what became a 12-0 scoring run for the Crusaders.

Much of the rest of the run was sparked by Jenkins, whose next rebound finished with three points as senior forward Masyn McWilliams passed the ball for senior guard Courtney Kester to dial up the three.

Kester scored six of her nine points in the game during the run as nearly the same play occurred 40 seconds later for Saxony to lead 20-13.

Oran was able to end Saxony’s run, but not until the second quarter as junior Madison Ramsey came up with the defensive rebound for the Eagles, getting the ball to Cauble for two to make it 24-15.

It continued to be a battle on the boards for the remainder of the first half, but Saxony still managed to jump to a 34-18 lead with 2:25 left in the second quarter.

The Eagles went on a 6-0 run to follow, with each point coming from the free-throw line as Cauble went 6-for-6 to make it 34-24 to end the first half.

“We realized at halftime that although we had that 10-point lead, we weren’t playing like we knew we could play,” Mueller said. “We focused more on rebounding because [Oran] was getting a lot of offensive rebounds. I also think we chilled out a little bit more, and we got our heads in the game.”

To start the second half, Mueller came up with a steal for Saxony with fellow senior center Addison Beussink coming down with an offensive board for a putback on the same play.

This allowed the Crusaders to answer the Eagles’ 6-0 run as Kester and McWilliams each recorded rebounds to equal into five more points to cause Oran to call a timeout down 41-24 with 6:15 remaining in the third quarter.

The Eagles were able to answer Saxony following the timeout as Cauble scored two off an offensive rebound, but the Crusaders went on another run, 11-0, to extend their lead to 52-26.

“We were too impatient in the first half,” Sides said. “We had shots out of rhythm because we just jacked [the ball] up as opposed to working the ball a little bit more. Take an extra 10 seconds, make one extra pass and we have a better shot. We have a size advantage on them, and we needed to take advantage of it.”

Saxony only allowed Oran to score four points in the fourth quarter for the Crusaders to claim this year’s title with a 68-36 win.

Mueller led the way for Saxony with a team-high 14 points as Jenkins finished behind her with 11 as Beussink and McWilliams tied for third at 10 a piece.

“[Four players scoring in double digits] is a huge spark for our team, and it shows that we have depth,” Mueller said. “Not only people that are out there on the court in the starting lineups, but we have a great bench to come and keep and extend our lead.”

This marks the second consecutive tournament win this season for the Crusaders, having only lost to Dexter in the SEMO Conference Tournament title game.

Saxony’s next tournament will be districts, which it has won five years in a row.