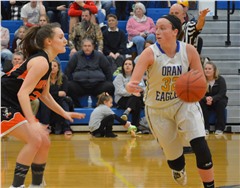 The saying goes, “Not one, not two, not three, not four…” and so on. The Oran girls basketball team, led by senior Leah Cauble, won the Scott-Mississippi Conference Tournament for a fourth-straight season last week.

The No. 1 seeded Eagles, who hosted this year’s tournament, faced No. 2 seed Scott County Central for the title Thursday night, a team they have faced for the past three years in this very game.

Oran (13-5) defeated the Bravettes (14-4) 91-76 as Cauble finished with quite the championship performance at 49 points, nine assist and six rebounds, all while shooting 63 percent from the field.

“It means a lot [winning this tournament again] because I’ve played with those girls since freshman year,” Cauble said. “It’s the same group of people, and it’s just nice to be able to win it four years in a row.”

Cauble nearly outscored Scott County Central in the first half with 31 points of her own as Oran took a 48-35 lead heading into the locker room.

The Eagles started the game with a 7-0 run before the Bravettes were able to tie the game at 9-9 with a little over four minutes left in the first quarter. Oran was then able to answer with another 7-0 run to make it 16-9 and eventually led 25-14 heading into the second quarter.

“The last game we beat them by [36], but we also hit 17 3-pointers I believe, so we know that’s not going to happen every game,” Oran head coach Ethan Evans said. “We wanted to get into a track meet — that’s kind of the way we play a lot of times.”

Oran was able to break out into a 22-point lead at 38-17 as Cauble scored 11 points in the first five minutes of the second quarter. However, the Eagles went on a scoring drought for nearly three minutes to allow Scott County Central to make it an eight-point game at 38-30.

Leading the way for the Bravettes was the duo of Bre’Asia Jones and Samantha Coffee, who finished with a combined 35 points. Coffee put up eight in Scott County Central’s 13-point run.

Cauble broke the run and scoring drought with one of her two 3-pointers on the night, helping her team reach the 13-point lead at the half.

The Bravettes hit a 3-pointer for the first points of the second half, which was answered by two points from Cauble. Cauble then came up with a steal followed by an assist to fellow senior Kaylee Payne for three, who finished with 10 points and hit another 3-pointer in the first quarter. She also came down with six rebounds and five assists.

With 6:49 left in the game, Payne went down with an undisclosed injury, who also missed the third-place game in the Holiday Classic against Jackson with a wrist injury, where the Eagles lost 84-57.

The track meet continued between both teams as Oran was able to hold onto its 10-point margin throughout. The Eagles were able to increase their lead to 25 at 84-59 after senior Madison Ramsey hit two free throws in the fourth. Cauble hit nine out of her 10 free throws as the Eagles made 66.7 percent of their shots from the line.

First-year starter sophomore Katie Webb combined for 24 points and 10 rebounds with senior Jessie Long in the post. Long finished with 13 points and also came up with a team-high six steals.

“The key was to play hardcore defense the whole time,” Cauble said. “Defense wins championships. Jessie and I have been playing in the run and gun game since we were in eighth grade. Every year we just keep getting better at it.”

With Cauble’s 49 points in the contest, she officially put up 133 for the tournament and currently has 3,385 career points, which ranks her third all-time in Missouri girls basketball history.

Cauble scored 41 points and had seven rebounds, three assists and three steals in Oran’s 74-20 route of Chaffee in the semifinals. She started the tournament with a 42-point game in a 102-31 win over East Prairie, while also coming down with six rebounds and four assists.

“She did what we needed to win,” Evans said. “We ask her to go down in the post and teams play man on her with some of the smaller [players] guarding her. She’s able to go down there and make some good post moves, score some buckets in the paint and go to the foul line and knock down some free throws.”

Cauble credits her performances to always being in the gym, where she can be found working on her game and also taking shots. She also focuses on getting her teammates open, which she knows she will continue to have to do in order to achieve her ultimate goal.

Cauble is currently 340 points away from breaking Hannah Wilkerson’s scoring record of 3,724 career points. Wilkerson played for Miller from 2006-2010 and continued her playing career at Missouri State. Cauble signed with Union in November.

“Scoring that much and ending up third on the list is pretty great, but like I just want a state championship,” Cauble said. “So whatever it takes to get there even if I break the record that’s great, but if not I’m fine if we just win.”

Oran has eight games remaining on its regular-season schedule and there are seven teams in Class 2 District 3 this season, so the Eagles could have a bye in the first round of the district tournament.

Cauble and the Eagles reached the Class 2 Final Four her sophomore season, but they fell to Adrian 54-46 in the semifinals and finally Scotland County 49-41 in the third-place game.

Oran failed to get back to the final four last season as the team fell to eventual state champions Neelyville 79-61 in the quarterfinals.