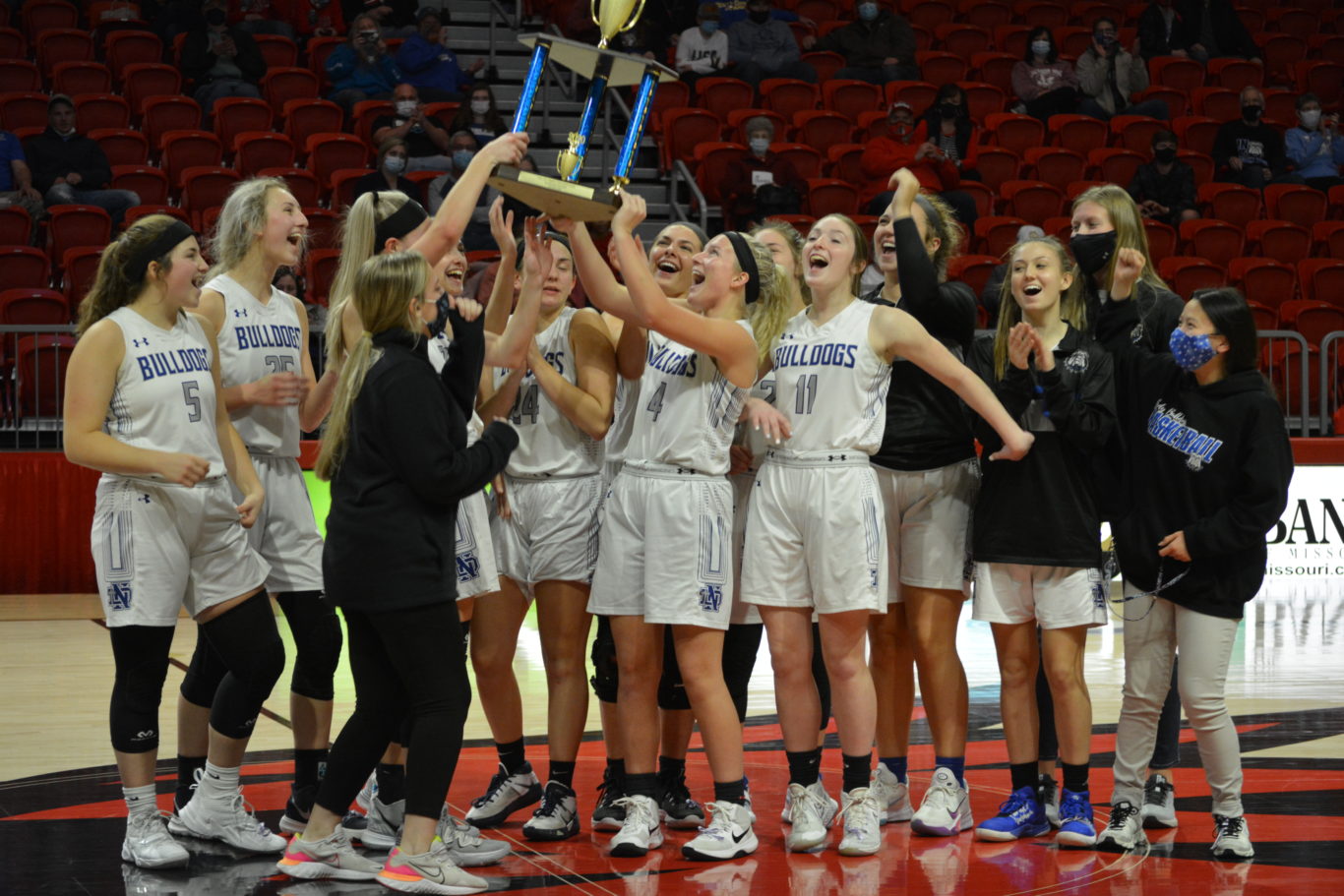 For the second year in a row, the Notre Dame girls basketball team took home the First State Community Bank Holiday Classic Championship Trophy with a win over Jackson. However, it was a much closer game than last year’s 57-38 contest as the Bulldogs only defeated the Indians by eight points, 40-32, to win this year’s title.

There were a total of three lead changes throughout the 32 minutes of play as Notre Dame took the final one in the third quarter. Jackson was still able to make it a 1-point game, 31-30, in the fourth after a 3-pointer by junior Jordyn “Jo” McClellan.

McClellan’s three came after Bulldogs sophomore Tori Rubel notched her first make from beyond the arc of the Holiday Classic with under four and a half minutes left in the game. Rubel produced seven points in the championship game as she scored five in the second half after passing out on the court in the second quarter.

Rubel lost consciousness after going for a rebound with five minutes, 11 seconds left in the first half after taking a blow to the head from a Jackson player. The contact was not the main reason she passed out, though, as Rubel sometimes has low blood pressure, which can cause fainting or dizziness because the brain doesn’t receive enough blood.

Rubel was able to wake up for a moment after initially passing out, but while she was being slowly lifted up, Tori went down again. Rubel was down for nearly three minutes before being able to be helped to the sideline.

“[After fainting], I feel very shaky and a little dizzy, but usually after I eat a few salt packets I’m good and ready to go,” Rubel said. “[I didn’t feel normal] probably until 10 minutes through halftime to get myself back on my feet and get my bearings again.” 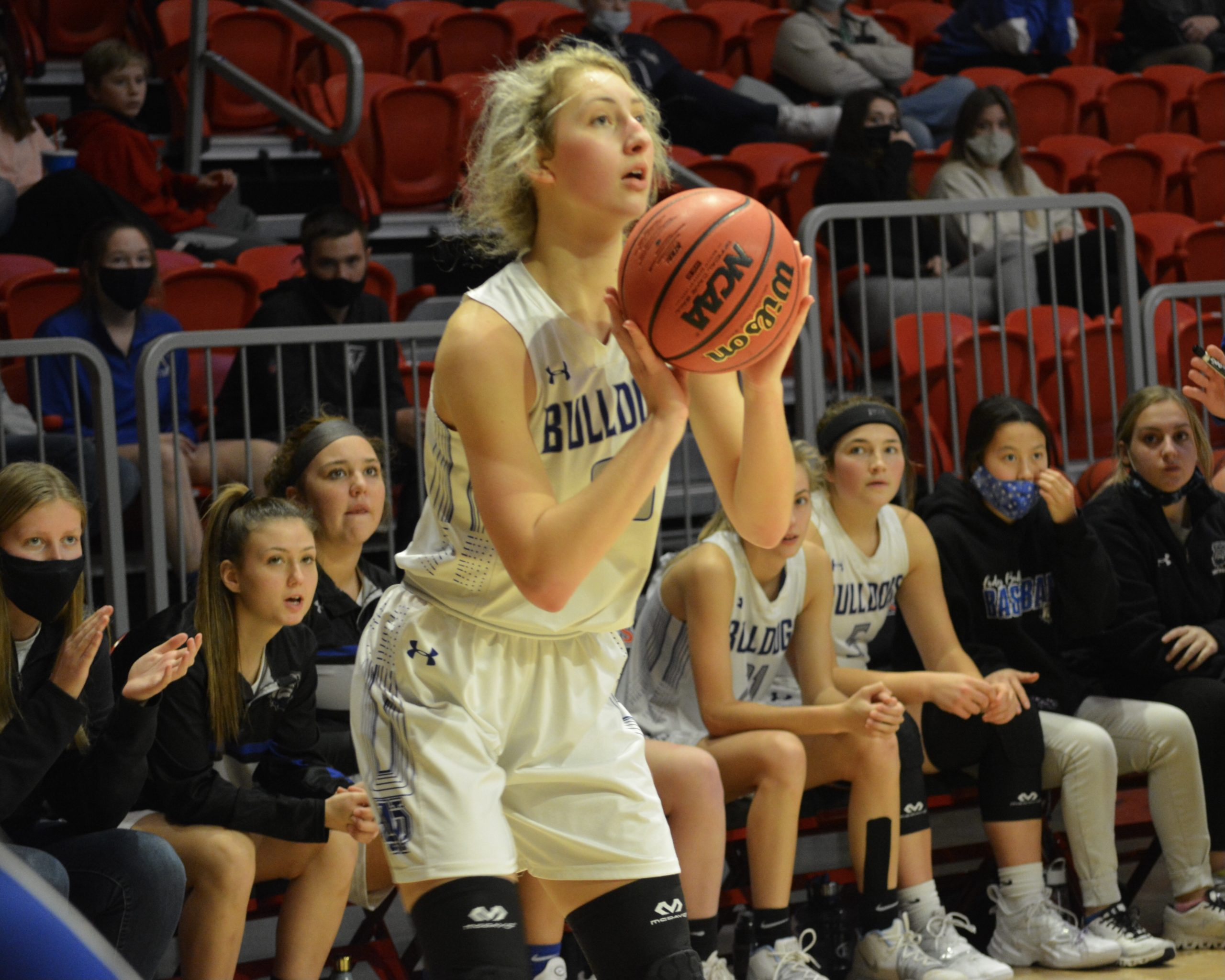 On top of her seven points, Rubel also collected four rebounds to help Notre Dame win its seventh Holiday Classic title in the 25 years it has existed. Rubel finished as the tournament’s fourth-leading scorer with 42 points (14 points per game) and averaged 5.6 rebounds and 3.0 steals each contest.

“Well, it’s my second year here, so it’s nice winning the Holiday Classic back-to-back,” Rubel said. “I love winning tournament championships. It’s one of the best feelings in the world especially when you win with all the people you love. I wish we could’ve played in the Border Line Challenge, but maybe next year.”

Helping Rubel seal the victory over Jackson for the Bulldogs was none other than her older sister junior Lexi Rubel, who produced a game-high 20 points along with six rebounds and four assists. Lexi scored nine of those points in the fourth quarter, where her clutch free-throw shooting (5-for-5 in the fourth) put the game out of reach.

Lexi finished one spot ahead of Tori in overall scoring at No. 3 with 44 points (14.6 PPG) as she also finished with 7.6 rebounds and 5.0 assists per game while hitting four 3-pointers.

“I love playing with her,” Tori said. “She’s always looking out for me like whenever I pass out and stuff. She’s always making sure somebody has my salt, my water, my head or something.”

Scoring wise in the second half against Jackson, Lexi recorded 15 of Notre Dame’s 22 points as Tori had five, while junior Kristin Edmonds produced the final two from the free-throw line in the fourth quarter.

The Rubel Duo was undoubtedly selected to this year’s Holiday Classic All-Tournament Team as fellow Bulldog junior Leah Jansen was named to the team as well. Jansen hit two 3-pointers in the first half versus Jackson and averaged 2.6 steals in the tournament.

Jansen is tasked with guarding the opponent’s top player and Jackson’s McClellan, who averages a team-high 14.8 PPG, was held to 11 points in title game. McClellan started the first quarter with two 3-pointers, but she failed to score in the second, had two in the third and hit her final three of the game in the fourth.

The biggest difference of the last four meetings between Notre Dame and Jackson and this game was the fact the Indians had both McClellan and their leading scorer from last season, senior Madison Lambert, on the court. McClellan was out all of last season with an ACL tear, while Lambert missed this year’s SEMO Conference Tournament title game Notre Dame beat Jackson in, 46-33, on Dec. 4.

Each time McClellan and Lambert weren’t on the court together against the Bulldogs, Jackson fell by at least 13 points or more.

Lambert paced McClellan with 10 points in the championship as she scored five in the third quarter and hit a total of two triples. Jackson’s third-leading scorer was senior Olivia Ward as she also hit two threes and finished with eight points.

Outside the trio of Lambert, McClellan and Ward, the only player to score for the Indians was senior Brooke Thompson, who recorded three of her team’s six points in the second quarter.

Lambert and McClellan were each named to the all-tournament team along with the Rubels and Jansen. McClellan was the Holiday Classic’s second-leading scorer with 49 points behind No. 6 seed Woodland senior Emma Brown’s 64. Lambert was the seventh-leading scorer at 34.

“They had Maddy back, and I love playing Jackson,” Tori said. “They always give us a great game and lots of competition. We always have something to work on when we play them.”

Heading into this season, Tori Rubel’s single-game, career-high scoring total was 17 points. Rubel broke that mark and set a new career high of 22 points against New Madrid County Central in the conference semifinals. Tori nearly reached 20 again by putting up 19 in a 55-42 win over No. 5 seed Delta in the Holiday Classic semifinals.

As the Bulldogs are currently undefeated at 6-0 and have won back-to-back tournament championships, Tori is averaging 14 points, 6.5 rebounds, 2.1 steals and 1.2 3-pointers per game.

“Last year I was growing a lot,” Tori said. “I feel like this year I’ve grown into my body and gotten stronger and more comfortable. I’m not a freshman anymore — I know what’s going on.”

The Holiday Classic semifinal versus Delta was the first time any team scored 40 or more points against Notre Dame this season. The Bobcats had a double-digit lead over the Bulldogs, 20-10, and were up 27-20 at the half.

“Delta is really good,” Rubel said. “They really pressured us, and the third quarter is when we really started to get going. I felt like we weren’t really ready in the first half, but by the third quarter we were ready to get after it.”

Notre Dame’s defensive adjustment of switching from matching Delta’s full-court pressure attack to instead being set on defense led to a 17-0 run for the Bulldogs to start the third quarter.

The Rubel Duo combined for 11 in the third quarter as Edmonds (two), Jansen (one) and senior Allie Burnett (one) combined for four 3-pointers in the frame. Notre Dame ultimately outscored the Bobcats 23-2 in the third and 35-15 overall in the second half.

Delta went on to win the third-place game with a 54-34 victory over No. 3 seed Oran as the Bobcats had two players named to the all-tournament in its first-ever appearance at the Holiday Classic: junior Kendall Holweg and freshman Addison Nichols.

Holweg finished as the tournament’s sixth-leading scorer with 39 points as Nichols finished No. 9 at 28 while coming off the bench for Delta.

With two championships under its belt, Notre Dame hopes to win the regular-season conference title next as it begins conference play on the road against Sikeston on Jan. 14. The Bulldogs and Indians face off one more time this winter as Notre Dame will host Jackson Jan. 21.

After the regular season, the Bulldogs look to three-peat as district champions but will have to do so in Class 5 District 1 after being moved up a class due to MSHSAA’s new Championship Factor for private schools. Class 5 District 1 will mostly be the same teams from last year’s Class 4 District 1 Tournament minus Dexter and Ste. Genevieve with the addition of Saxony Lutheran, which won eight-straight Class 3 district titles.

The Bulldogs reached the final four last year, but it was canceled due to COVID-19. “We’re ready — we want to go for a ring this year, and we’ll try our best,” Tori said.