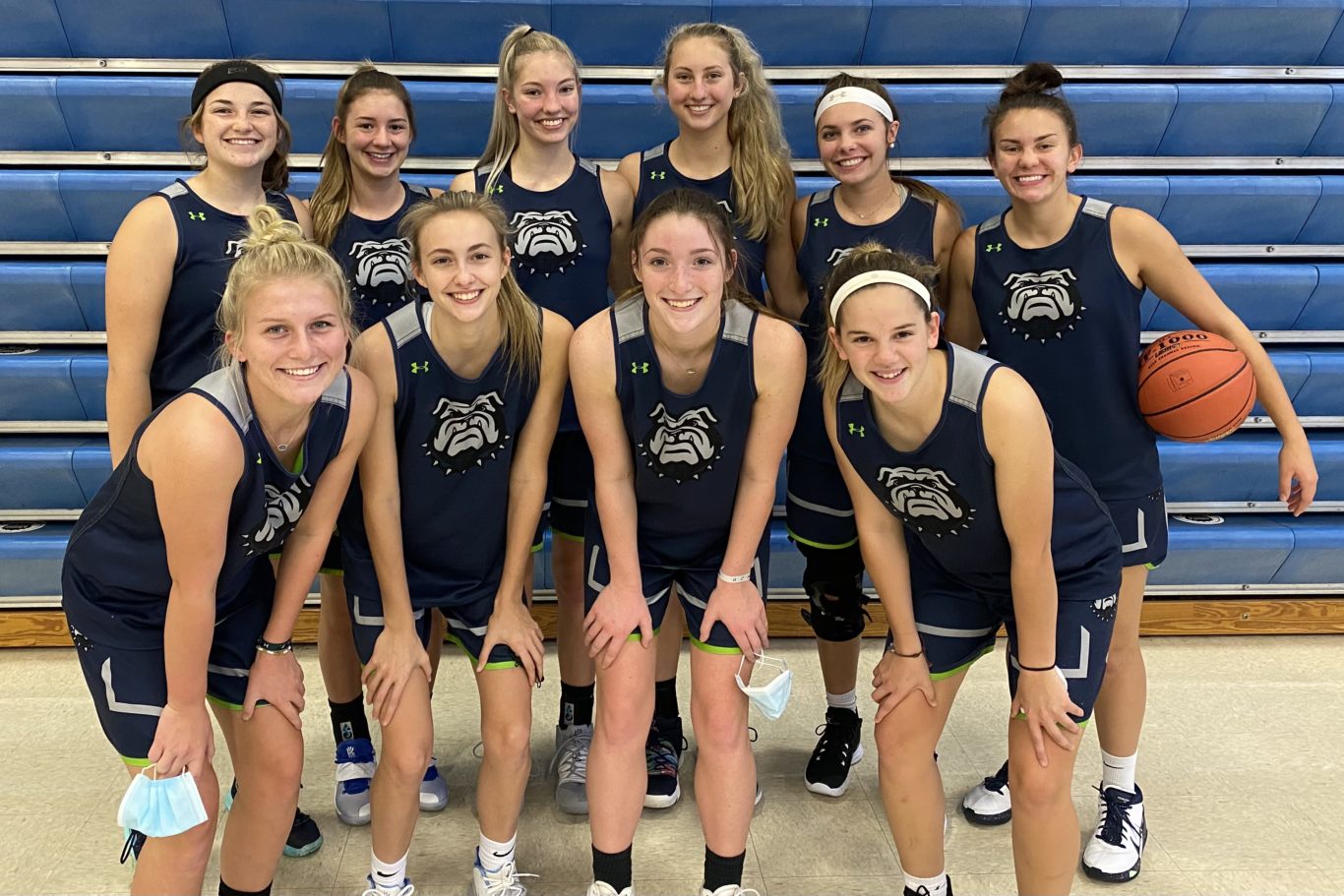 For the first time in 10 years last winter, the Notre Dame girls basketball team was able to reach the Class 4 Final Four, thanks to a dominant, 20-point win in the quarterfinals.

However, like the rest of the final four teams in Class 4 and 5, the Bulldogs were unable to compete for a state championship due to the coronavirus pandemic ending the winter season early.

Notre Dame’s third-year head coach Kirk Boeller said he and his players haven’t talked about that much, but they have moved past it and are ready to improve on last season.

Notre Dame only lost four games in 2019-20 while coming out on top in 25 of contests en route to winning its first-ever SEMO Conference Tournament Championship and second-straight Class 4 District 1 title.

“I’m excited — we have a lot of girls back from last year’s team,”  Boeller said. “I’m nervous because hard telling what the season is going to look like. With how last year was cut off right before state, we’ve refocused and shifted our mindset to this season.”

The Bulldogs bring back a total of three, full-time starters from last season in juniors Lexi Rubel (6-foot), Leah Jansen (5-8) and sophomore Tori Rubel (6-1). Another player coming back from last year’s final-four run is senior Delaney Dohogne (5-7), who made several starts.

“I think their confidence has grown — they’ve spent a lot of time this summer playing basketball,” Coach Boeller said. “Not that they weren’t confident last year, but you can tell there’s a sense of, ‘All right. I know what I’m doing, and I’m ready to go do it.’”

In her sophomore campaign, Lexi Rubel became the first player in program history since 2011 to earn all-state honors after averaging 13.7 points, 8.2 rebounds and 3.1 assists per game (all team highs). She also garnered all-conference accolades for the second-straight year.

“Her freshman year I thought, ‘Dang, she’s going to be pretty good,’” Coach Boeller said. “Last year I was like, ‘All right, she’s the real deal.’ This year, I’m just looking for her to do a lot of the same of what she’s done. Confidence taking it to the basket and her shot has tremendously improved since freshman year.

“Just kind of filling in that leadership role, and it’s not a verbal leadership. It’s her work ethic and how she treats other people. As an upperclassman, I think she’s on the verge of now taking that next step and just becoming that much better than what she’s already accomplished.”

On top of her averages last winter, Rubel became a more efficient shooter by going 46% from the field, 69.7% at the free-throw line and 31.4% from 3-point range (made a team-high 37 threes). She also finished third in steals with 2.1 per game behind Dohogne and 2020 graduate Riley Burger.

One of the reasons why Notre Dame was able to Rockwood Summit 55-35 in the quarterfinals was The Rubel Duo combining for 28 points as Lexi led all scorers with 17 while Tori paced her at 11.

In her first year of varsity action, Tori Rubel finished as Notre Dame’s fifth-leading scorer with 5.4 PPG and was second in rebounds behind Lexi with an average of 4.3 per game. She also came in second behind Lexi in assists at 1.9.

“Those two are competitive with each other in a good way, so they push each other, and they’re already really good,” Coach Boeller said. “To get them and that competitive mindset where they’re pushing each other — they just keep improving every day in practice.”

For many girls basketball coaches in Southeast Missouri, it’s a luxury when they can have at least one player that’s 6-foot or taller. With the Rubels, Coach Boeller said he gets “funny looks” from opposing coaches when he has Lexi and Tori announced as his starting guards because of how tall they are.

“Coaches always kind of look at me weird when I put down in the starting lineup for the announcers and our point guard is 6-foot, and our shooting guard is 6-foot-1,” Boeller recalled. “That’s the thing with those two, and Lexi did it last year. In that quarterfinal game last year, we put Lexi in the high post, and she went to work.

“It’s not our No. 1 choice to put somebody down there, but they’re so versatile, and they’re 6-feet, that if we would need to throw somebody down low they’re capable and willing to do it.”

Another key for Notre Dame this winter will be Leah Jansen stepping up in Riley Burger’s role defensively when it comes to pressuring ball handlers. Burger, who is now a jumper for the University of Louisville’s track and field team, finished second in points and rebounds behind Lexi Rubel with 8.4 PPG and 4.6 RPG.

Burger also recorded the most blocked shots (1.2) and second-most steals (2.5) while garnering all-conference and all-district honors.

Coach Boeller knows Jansen is more than up for the challenge as she finished fourth in steals with 2.0 per game. Jansen also came in sixth in scoring with 5.3 PPG and had the third-most assists at 1.7.

“Leah does such a good job defensively,” Boeller said. “She works so hard that she wears herself out, but she creates steals and gets hands on passes. Usually we have someone running up the court [for her to pass to], and she finished as one of our top leaders in assists. She knows she doesn’t have to score a ton of points to be valuable in what she’s doing.”

Returning as the Bulldogs second-leading scorer is Dohogne as she produced 8.1 points per game coming off the bench for the most part. Dohogne was able to lead Notre Dame in one category, though, as she collected a team-high 2.9 steals per game.

Dohogne also paced Lexi Rubel for the most 3-pointers with 24 of her own as four of those came in Notre Dame’s 52-34 win over Jackson in the conference tournament title game. Tori Rubel finished with the third-most threes at 21.

“[Dohogne] would come off the bench and there was an immediate spark of energy,” Coach Boeller said.
“She’d get hands on passes and make huge shots, and then she’d just smile. She’ll be in the starting rotation this year, and she’s excited for that. Her mindset hasn’t changed — she’s still going to be that spark plug, but this year we’re going to get it from the tip.”

Another shooter returning for the Bulldogs is senior Allie Burnett (5-6) as she only missed one game last season. Burnett was Notre Dame’s best 3-point shooter by making 33.3% of her attempts for a total of 19 treys.

Coach Boeller described Burnett as the team’s vocal leader because of how she’s always encouraging her fellow players and is one of the loudest players on the court.

“We have 10 guards, so we are going to probably shoot a lot of threes,” Coach Boeller laughed. “They’re all good shooters. In practice, we do rebound drills, and I’ll throw it out to a shooter. We can’t get any rebounds because they’re making them, so I think we’ll be a pretty good shooting team I’m hoping. If we are and can extend some defenses that’ll be able to allow us to really penetrate and attack the basket. We’re lucky because we have a bunch of good shooters.”

Along with being a team that shoots the ball well, Coach Boeller feels like his team will continue to pride itself on defense.

Notre Dame added another guard to the mix over the offseason as junior Kristin Edmonds (5-8) transferred from Anna-Jonesboro. This summer, Edmonds suited up for a few games with the Rubels and Jansen on SEMO Sizzle.

“We don’t have many true posts, so she’s another guard to add to our mix,” Boeller said. “I’m telling you, she works hard. She stays after practice every day and runs on her own and does some ball handling stuff. She’s going to be a big piece of filling the shoes of [last year’s seniors].”

Some players who will be stepping up from last year’s junior varsity include juniors Sarah Brennan (5-8) and Sydney Seabaugh (5-7). These two Bulldogs will be instrumental in Notre Dame not “falling off” during games as depth was one of its strengths last season.