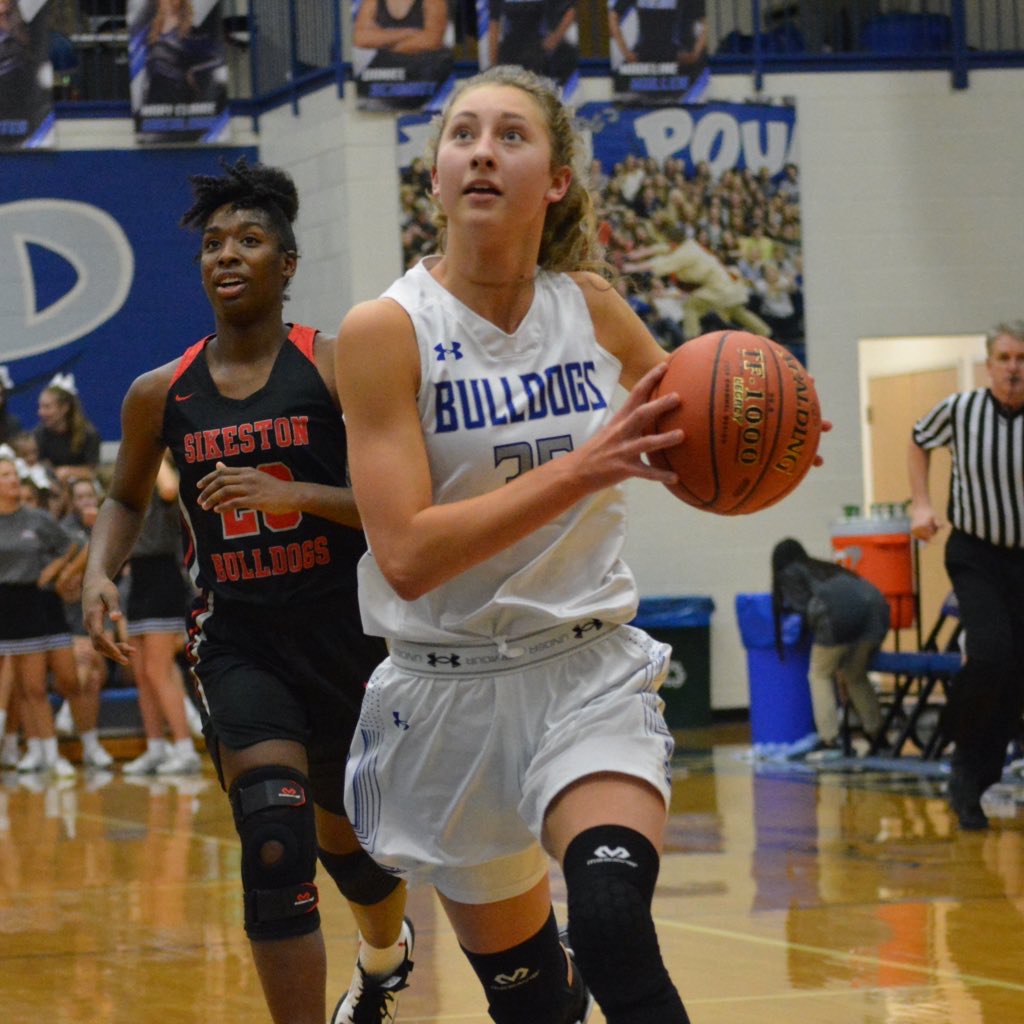 The Cape Notre Dame girls basketball team’s first SEMO Conference game since winning the conference tournament for the first time was in the “Battle of the Dogs” Thursday night at home in the Dawg Pound.

The Bulldogs (12-2, 1-0 SEMO) hosted the Sikeston Bulldogs (5-7, 0-2), which placed sixth overall in the conference tournament after falling to Cape Central 44-40 for the consolation title.

Notre Dame showcased its dominance early on in the contest by starting the game on a 16-0 run and did not allow the Bulldogs to score until the two-minute, 15-second mark with a free throw. Sophomore Amyari Blissett’s lone make from the line was Sikeston’s only point scored in the first quarter.

“That point was on a free throw, so that shot was contested,” Notre Dame’s second-year head coach Kirk Boeller said. “That’s our makeup — we try to be intense, and we’re doing it.”

Sikeston did not score an actual field goal until the second quarter when Bulldogs sophomore Karris Allen scored off a steal by senior Taydrianna Barnett. This score came with 6:40 left until halftime to narrow Notre Dame’s lead to 18-4.

The Bulldogs ultimately won the contest over Sikeston by 31 points at 63-32 as one of their first-year starters and underclassmen freshman Tori Rubel finished with a game and career-high 19 points. Rubel scored seven of her points during Notre Dame’s 16-0 run.

“[Rubel] has done everything that we’ve asked of her,” Coach Boeller said. “She’s one of our best defenders, and she goes in and she gets rebounds and gets hands on passes. She has gone above and beyond what we’re looking for. Tonight for her to come out and knock down some of those big threes, you could just kind of see that weight lifted. She’s been playing like that all year, so I’m proud that the hard work paid off during this game.”

The freshman sensation also hauled in four rebounds along with a team-high three steals as Notre Dame recorded 10 against Sikeston. Rubel’s older sister sophomore Lexi Rubel recorded two steals of her own, while senior Emily Kellum and sophomore Leah Jansen did as well.

Kellum and Lexi paced Tori in scoring with 10 points apiece, and Kellum and Tori also went 2-for-4 from 3-point range. The Bulldogs finished with seven triples in the game.

“We were in rhythm tonight I thought,” Coach Boeller said. “We were catching and shooting at the right times, and not to say we haven’t done that this year, but tonight we did a really good job getting the ball to the middle and then kicking out to the open shooter. When we do that, we can knock down shots.”

Lexi Rubel hit one trey of her own while Notre Dame’s other two 3-pointers came from juniors Allie Burnett and Delaney Dohogne off the bench. Dohogne started over Kellum in the First State Community Bank Holiday Classic. Burnett and Dohogne each combined for 10 points as fellow bench player junior Alora Smith paced them with four points.

“There’s 10 girls that all contribute something to this basketball team,” Coach Boeller said. “It makes it hard to coach because you want to put all 10 on the floor at the same time, but it’s good knowing somebody can come in and produce.”

Another reason why Notre Dame was able to beat Sikeston with ease was because of their performance on the boards by combing for a total of 36 rebounds. Kellum led the way in rebounds for the Bulldogs with seven as Burnett, Jansen and Lex Rubel each had five.

Jansen finished as Notre Dame’s fourth-leading scorer with six points and scored four of them on fast break layups after forcing Sikeston to turn the ball.

“We talked about that before the game a little bit,” Coach Boeller said. “We said, ‘We haven’t been getting many [steals], so leak out and let’s see if we can get some in the passing lanes. Leak a little bit, and let’s throw it up and go get layups.’”

Sikeston only had one player manage to score in double digits, which was none other than the team’s leading scorer in Barnett, who finished with 18 points against Notre Dame. Allen paced her with eight.

In Notre Dame’s 13 games thus far, the Bulldogs have held nine of their opponents to under 40 points, which includes every conference opponent they have faced.

“That means they’re playing hard,” Coach Boeller said. “At the varsity level, that’s hard to do. It takes the ‘want to,’ and this group wants to play defense. That’s half the battle.”

Notre Dame still has six more conference regular-season games to play and will face Jackson (9-3, 1-0) tomorrow on the road at the Event Center. The Bulldogs and Indians have played twice already with Notre Dame coming out on top both times — first by 18 points to win the conference tournament and then 19 to win the Holiday Classic.

The two other conference teams the Bulldogs have faced include Kennett (8-7, 0-2) and Saxony Lutheran (9-4, 1-0), which defeated Sikeston 75-68 in overtime. Notre Dame beat both of these teams in the conference tournament with a 46-25 win over Kennett, followed by a 47-30 victory over Saxony.

“[Playing Jackson a third time] is going to be a tough one,” Coach Boeller said. “They know what we’re doing, and we know what they’re doing, so it’s going to be one of those where it’s anybody’s guess [who wins]. It’s a good conference — there’s really good teams in this conference.”

“This is a fun atmosphere when it’s packed,” Boeller said. “It’s like a sardine can where you see how many people you can cram in.”