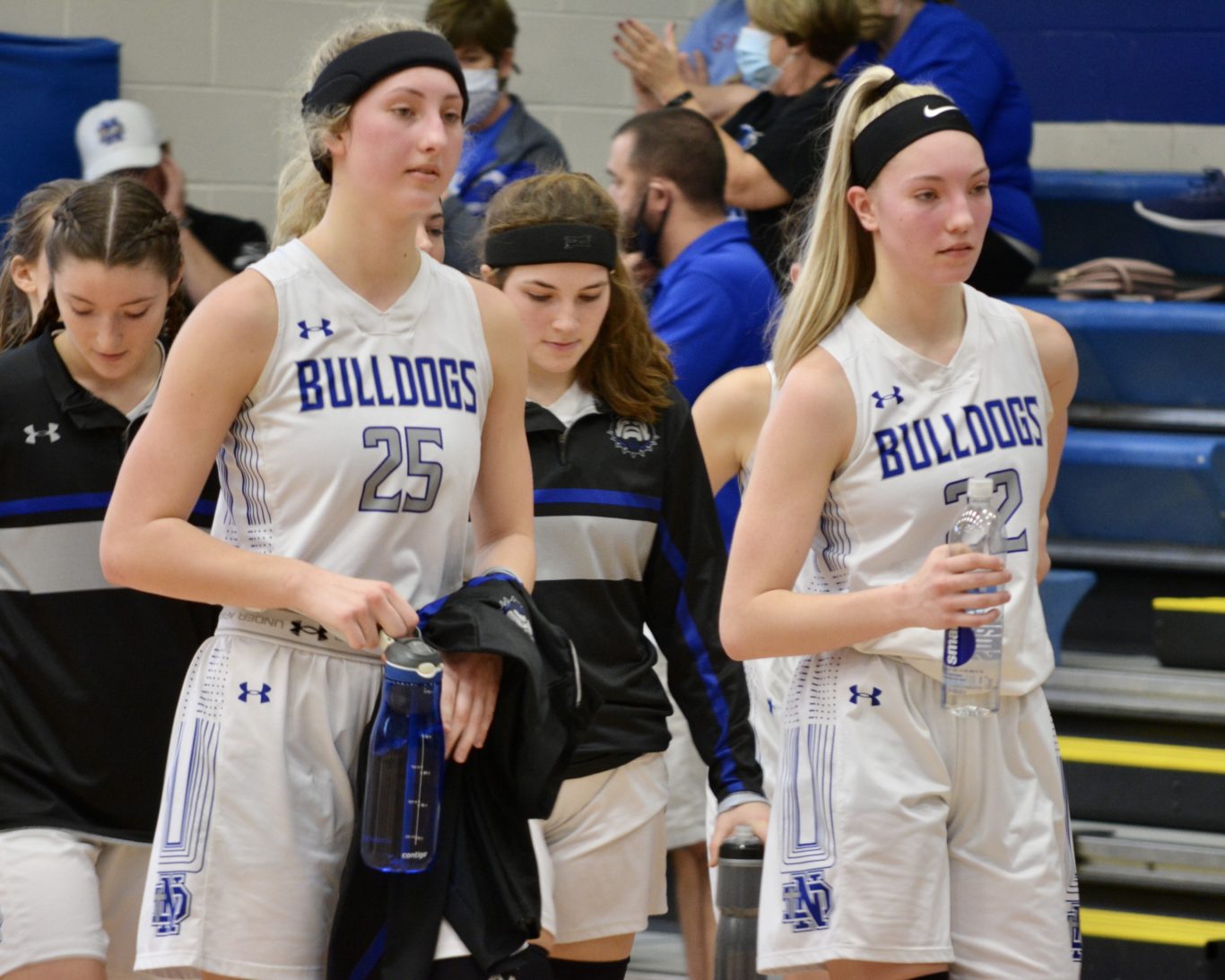 Despite playing in five less games and having to deal with numerous injuries, illnesses and health issues this winter, the Notre Dame girls basketball team still managed to reach the state quarterfinals for the third season in a row.

The Bulldogs hosted this year’s Class 5 Quarterfinal against one-loss Union, and Notre Dame fell short of returning to the final four after losing to the Wildcats, 60-43, Saturday at Jerry Grim Court.

However, even though the Bulldogs season is over and they aren’t playing for a state championship this week, their head coach Kirk Boeller still couldn’t be prouder of them and how they overcame unimaginable adversity.

“The things these girls have gone through is not what a normal basketball team has to deal with,” Coach Boeller said. “We lucked out on quarantine — we never had to quarantine — but there were injuries, illnesses and different things. It would’ve been really easy for them to give up and say, ‘Maybe next year?’ Every one of them is passionate about the sport, loves working hard and most importantly loves their teammates.

“I don’t know that I’ve ever had a team this close before. The bond that these girls have with each other — I haven’t seen many teams like that, so this year has been very special.”

Leading the way in Notre Dame’s final game of the season was none other than junior guard Lexi Rubel, who finished with a game-high 23 points to reach 1,000 in her career. She also led the Bulldogs in rebounds (nine), assists (three) and steals (two).

“She’s a great kid, and I think that’s why I enjoy this squad the most because they’re as talented as anybody in the state, but they’re better people. They’re better people than they are basketball players, which makes it so much fun to be around. It’s an infectious group that are just a lot of fun.”

Rubel was the only player for Notre Dame to score double digits as junior Leah Jansen paced her with eight, while Rubel’s younger sister sophomore Tori Rubel had seven while playing in about 60% of the game.

Union’s top-three scorers each finished with 11 points or more as seniors Reagan Rapert (18), Emily Gaebe (14) and Julia Overstreet (11) combined for 43.

Rapert, who will play college basketball at Arkansas State, scored 10 of her team-high 18 points in the fourth quarter as eight were from the free-throw line. In all, the Wildcats went 20-of-24 from the charity strip, while Notre Dame only had seven free-throw attempts (all from Lexi: 6-of-7).

“Rapert is on a different level,” Coach Boeller said. “We played Incarnate Word, and that’s the best team we played all year. She might be as good as Incarnate’s point guard [junior Saniah Tyler]. She is by far one of the top two guards in the state.

“I can’t imagine anybody as fast, as strong, that can shoot, sees the floor and does everything right — it’s hard to guard what you can’t see. She was so quick that we couldn’t find her today.”

Defensively, Union forced 20 turnovers as the Bulldogs only finished with five steals as Tori Rubel, junior Kristin Edmonds and sophomore Anna Garner each had one to pace Lexi Rubel’s two.

Edmonds and senior Delaney Dohogne were the only other players for Notre Dame besides The Rubel Duo and Jansen to make a field goal as Kristin hit a 3-pointer to tie the game at 9-9 back in the first quarter. This came after a three from Lexi for a Bulldogs 6-0 run to answer Union’s 9-3 rn.

However, the Wildcats answered Notre Dame’s run with a 6-0 run of their own. Down 15-9 to start the second, the Bulldogs made it a one-point game, 15-14, with a 5-0 run after a 3-pointer from Jansen and Dohogne’s lone score of the game off a steal from Tori Rubel.

After that, Union orchestrated a 7-0 run before halftime and took a 27-16 lead heading into the locker room. The Wildcats started the third quarter on a 5-0 run before The Rubel Duo went on a 7-0 run of their own to then only trail 34-26 with four minutes, 28 seconds left in the third.

Tori Rubel scored the first five points as she hauled in an offensive rebound for her second putback of the game, followed by her lone 3-pointer of the contest off a screen set by Lexi. This was followed by two more points from Lexi, which forced Union to take a timeout.

The Wildcats were able to pull away in the fourth and final quarter, though, as they went 14-of-16 from the free-throw line in the final eight minutes. Lexi Rubel scored 10 of Notre Dame’s 12 points in the fourth as six came from beyond the arc as she finished with three triples.

With Lexi’s 23 points and Tori’s seven, this was the seventh and final time she and Lexi combined for 30-plus points on the season. The Rubel Duo will play in their final season of high school basketball together in 2021-22 as other starters like Edmonds and Jansen will return for the Bulldogs as well.

“What’s so cool is [Lexi and Tori] love playing with each other,” Boeller said. “They see each other well on the floor and pick each other up. At the same time, they’re not afraid to get in each other’s faces. They make each other so much better and push each other.

“It’s cool to see sisters whose personalities are so different but are so close and get to play together and represent our school together. … There’s a bit of pride I think they take in that name they have, and I’m lucky to be able to coach them.”

Lexi missed two games in January when Notre Dame (18-6) went 1-1 against then Class 4 No. 1 ranked Park Hills Central (48-47 win) and Class 5 No. 2 Helias Catholic (47-40 loss). The Bulldogs were also without the help of Tori for the last two and a half quarters of the Helias game.

Tori missed five-straight games in January because of a low-blood pressure issue she’s been dealing with since late December. During Tori’s absence, Notre Dame went 2-3 overall but then finished the season 8-1 in her return.

Even though Rubel was able to come back, she still played in limited minutes and suffered low blood pressure episodes in the district championship and sectional game.

Luckily for Tori, though, doctors have told her that she will grow out of the low blood pressure issue as she gets older. They also told Rubel she started having them because they believe she caught a virus in December, which threw off her immune system and made her more sensitive to her low blood pressure. Before this season, she had never experienced an episode during a game.

Tori ended the season as Notre Dame’s second-leading scorer and rebounder behind Lexi, and she was named all-district for the second season in a row.

Tori also helped the Bulldogs win the SEMO Conference Tournament Championship for the second-straight season (first time ever) and a third-consecutive district title for the first time in 17 years.

“For Tori [to have been able to finish the season], I love it for her because that is the sweetest, nicest and friendliest kid in the world,” Coach Boeller said. “To see her happy — we lost and they’re all upset, but you see that relief of ‘I’m OK.’ Anytime there’s any success for her, I love it, and I’m absolutely so proud of her.”