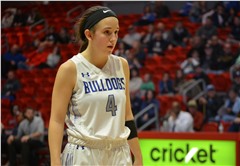 The Cape Notre Dame girls basketball team had a chance to continue their historic season against Miller Career Academy in the Class 5 Quarterfinals on Saturday, but the Bulldogs came up seven points shy of doing so.

The Bulldogs only scored 25 points in the first three quarters of the contest, while only having hit three 3-point shots as senior Megan Heisserer led all scorer with seven points before the fourth and final quarter. Junior Riley Burger and freshman Lexi Rubel paced her with six points apiece after 24 minutes of play.

Trailing 37-25, Notre Dame was able to go on a 11-0 in the first minute of the fourth quarter as Heisserer hit back-to-back shots from beyond the arc to make it narrow Miller Career’s lead to 37-33.

Fellow Bulldogs senior Julia Williams and junior Emily Kellum joined Heisserer’s 3-point party with treys of their own in the fourth, where Notre Dame outscored the Phoenix 23-17.

Notre Dame even tied the game at 45-45 with 2:23 left in the game after Kellum hit her lone 3-pointer of the game. Kellum only scored two other points in the quarterfinal, which came from free throws.

Rubel, who plays as the Bulldogs point guard offensively and center on defense, put up a game-high nine points in the fourth quarter. Rubel finished with a team-high 15 points in the final game of her freshman year.

The only problem was Miller Career outscored the Bulldogs every single other quarter. The Phoenix took a 12-7 lead in the first quarter and then 24-17 in the second, while finally scoring 13 points to Notre Dame’s eight in the third quarter.

One issue Notre Dame had with Miller Career’s offense was defending players driving into the lane as Phoenix junior Rayn Tally put up a game-high 21 points by having success in the paint.

Three other players for Miller Career scored in double digits, which were juniors Ajanae Garrett and Antuanae Garrett with 10 points each.

Notre Dame also allowed the Phoenix to score nine points from the free-throw line, where senior Daisha Seltzer had five of her seven points. The Bulldogs also missed seven of their 12 attempts from the line, finishing 9-for-20 overall to the Phoenix’s 10-for-14.

Burger only scored one more point in the game to finish with seven points, and she ended up fouling out after not playing for a few of the final minutes.

With the win, Miller Career advances to the Class 4 Final Four while Notre Dame hasn’t reached the final dance since 2010. The Bulldogs were able to win their first Class 4 District 1 title in nine years with an avenging win over Dexter, knocking the Bearcats off their eight-year reign as district champions.

In the preseason, Notre Dame’s first-year head coach Kirk Boeller said, “I think if we finish the year knowing that we did the best we could, I think that’s a successful season whether or not we win a state championship or lose in the first round of districts. I think if we walk off that last game thinking we did our best, that’s successful.”

The Bulldogs graduate four players including starters Heisserer and Williams and return Burger, Kellum and Rubel for 2019-20.