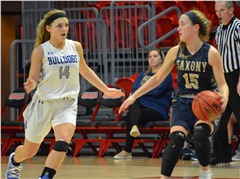 The third time was the charm for the Cape Notre Dame girls basketball team as it was finally able to defeat Saxony Lutheran 52-44 on Jan. 31 at home.

The first meeting was in the opening round of the SEMO Conference Tournament in November, where the Crusaders (18-6) defeated the Bulldogs (15-7) 53-47. Next was when the teams met in the Holiday Classic Championship game as Saxony came away victorious once again, 69-62.

Notre Dame also fell to Saxony three times last year as the team’s last win over the Crusaders came during the 2016-17 season. However, in the final contest between both teams, the Bulldogs forced Saxony to turn the ball over 15 times to score 19 points off turnovers.

“The girls got together before the game, and the seniors especially said, ‘We don’t want to lose to them three times, and not the last one on our home court,’” Bulldogs head coach Kirk Boeller said. “They dug down and there was a lot of fight in that game. I think defensively in the second half you could see it in their eyes that there was no way they were going down without a fight.”

Senior Megan Heisserer recorded a team-high 19 points, four deflections and tied for second in steals at four with junior Emily Kellum. Nine of Heisserer’s points came from beyond the arc as fellow senior Julia Williams hit two 3-pointers and was second in scoring for the Bulldogs with 11 points.

“Megan has been playing varsity since freshman year, and I think Julia started playing her sophomore year,” Coach Boeller said. “They’ve played varsity basketball for a while, but they’ve had upperclassmen to look at to be those leaders. They’ve done a great job stepping into that leadership role. For making freshman Lexi Rubel feel included and part of the team, and then the same with sophomore Lindsey Bauwens — all of the seniors are just fun people and that bleeds throughout the program.”

Kellum only scored two points, but she did come down with a team-high eight rebounds. Freshman Lexi Rubel paced her with six boards and also scored seven points with eight assists.

Boeller said the win over Saxony was big since the Bulldogs fell to Jackson 44-42 earlier that month, a team they defeated handedly 53-35 in the Holiday Classic semifinals. Notre Dame was without junior Riley Burger.

The reason Burger missed the game wasn’t because of an injury or illness, but because she was out of the country. Burger was in Cuba participating at a track and field camp she was invited to.

“It was led by the Cuban and United States Olympic long jumpers and triple jumpers, so when she asked me to go I was like, ‘Uh, yeah you can definitely do that,’” Boeller laughed. “It was a once in a lifetime opportunity, so I was like, ‘Yes, please go. Tell us all about it when you get back.’”

In her two years of track and field thus far, Burger has won back-to-back Class 4 State Championships in the triple jump and also earned all-state in long jump.

“Riley is just a freak athlete,” Boeller said. “You tell her to go guard so and so or go out there and trap — it’s like effortless. She’s one place, and two steps later she’s on the other side of the court, so you can put her anyway with her athleticism and she’ll be successful.”

Following the Saxony game, Notre Dame faced Class 5 No. 1 ranked Jefferson City and fell 64-37. The Bulldogs then played Class 4 District 1 and SEMO Conference opponent Dexter and fell 40-36 on the road. The only player to score in double digits for Notre Dame against the Bearcats was Rubel, who put up 16 while Heisserer and Williams paced her with six apiece.

“[Rubel] is an incredibly talented basketball player,” Boeller said. “She knows the game — she’s smart, she can pass and she can dribble. The last three or four games she’s looked more to get her shot by penetrating to get to the basket, get fouled and shoot layups. She runs point [on offense] and then she’s our center on defense. She’s one of those that knows the game so well that she can adjust to anywhere we put her.”

The Bulldogs will likely earn the No. 2 seed in this year’s C4D1 tournament held at Cape Central.