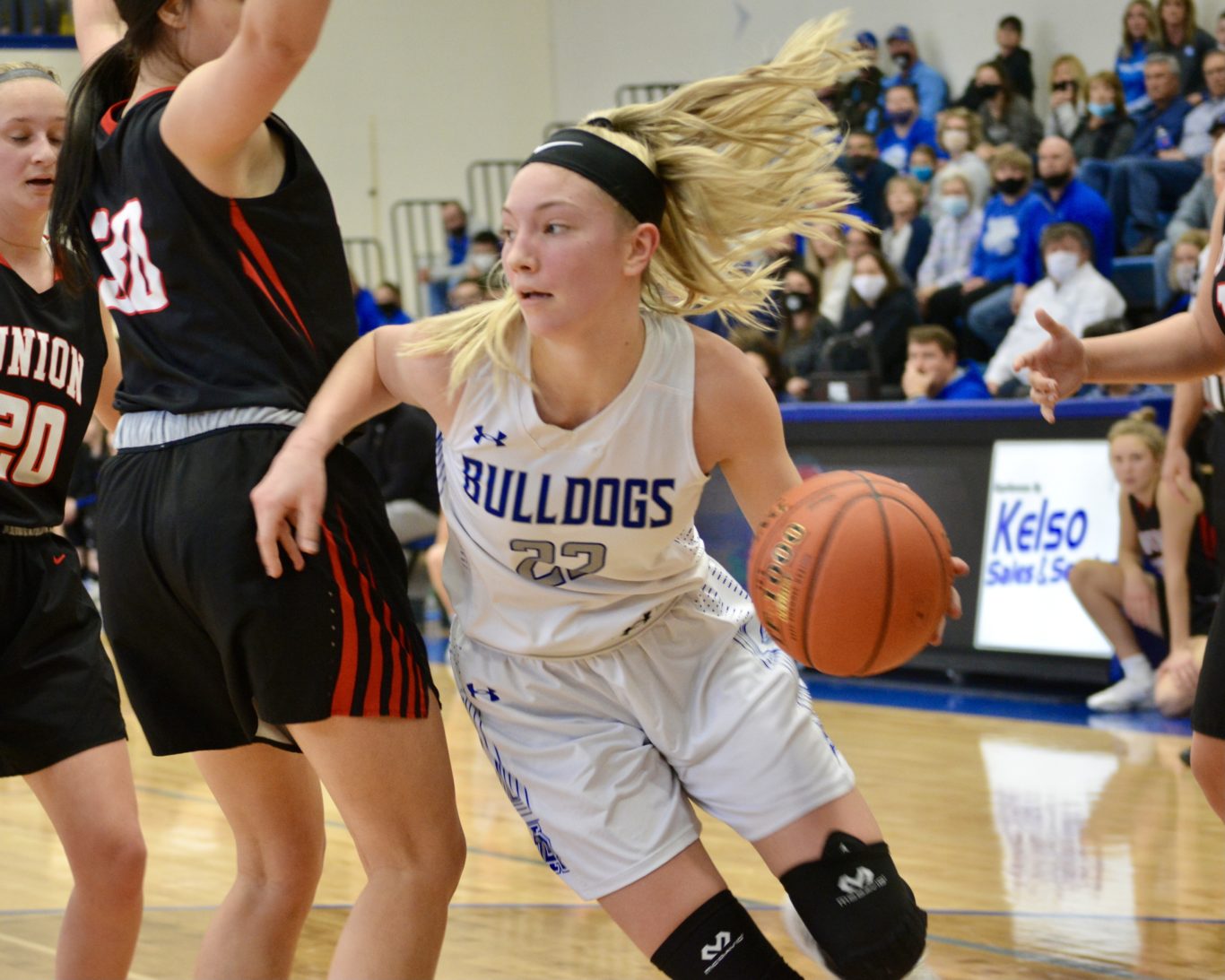 One of junior Lexi Rubel’s goals this winter with the Notre Dame girls basketball team was to score her 1,000th career point, and she accomplished this feat in the Bulldogs final game of the season Saturday. Realistically, though, Rubel has wanted to do this for a long time.

This is because four of her family members, including her parents Michele Millham Rubel and Matt Rubel, scored 1,000 points in their own high school careers. Michele finished with 1,080 points at Jackson (Class of 1997), while Matt scored 1,282 for Notre Dame (1996).

Lexi’s two other family members to reach the mark were her aunts and former Bulldogs Ashley Millham (2003 graduate) and Lisa Millham (2002), who rank first and third all-time with 1,615 and 1,326 points, respectively. They helped Notre Dame win a state championship in 2002.

“I’ve wanted [to score 1,000 points in high school] since I was in grade school,” Rubel laughed. “It’s really nice, and it’s a big honor especially just to join my family in the 1,000-point club.”

Rubel had to give credit to her parents for everything that she’s been able to accomplish not only on the basketball court but in life as well.

“They’ve definitely been the most influential people in my life especially for basketball,” Rubel said. “If I need a rebounder, either one of them will go out and rebound with me. If I need someone to play one-on-one, my dad will play one-on-one, and we’ll play horse. My sisters and I have always had basketballs in our hands, and they’re always a part of that with us.”

Rubel officially reached the mark against Union in the Class 5 Quarterfinals on Saturday as she only needed 20 points. Lexi was able to eclipse that as she scored 23 with nine of those points coming from 3-point range.

The Bulldogs ended up falling to Union 60-43, though, for Notre Dame to come up short of reaching the final four for the second season in a row. Rubel was the only player on her team to score double digits in the loss.

“It stinks that we’re not still celebrating, but I’m glad I got it this year with all of the adversity we faced,” Rubel said. “[My teammates] knew I was getting close [to 1,000], and we just feed off of each other and just play. We didn’t think about it too much until after the game.”

Rubel’s performance versus Union was her eighth and final 20-point game of the season as she scored 10-plus points in 19 of the 22 times she played. Lexi led Notre Dame in scoring through 15 of those 19 games, and she even finished the season with seven double-doubles.

Rubel’s season and career-high scoring mark was in a double-overtime loss, 69-66, to Cor Jesu Academy Jan. 15, where she scored 29 points and had 13 rebounds. In the game, Lexi combined with her younger sister, sophomore Tori Rubel, for 37 points in what was one of The Rubel Duo’s seven 30-plus point scoring outputs of the season.

However, Tori only played in around 20% of the game and even missed five contests in a row due to her low blood pressure issue in January. Lexi and Tori, who combined for 27 points in last year’s quarterfinal to reach the Class 4 Final Four, only played in 17 of Notre Dame’s 24 games together this season.

Like Lexi, Tori was also able to set a new single-game, career-high scoring mark this season with 22 points in a 50-38 win over New Madrid County on Dec. 3. Lexi paced Tori with 11 points of her own along with 11 boards.

“I love playing with Tori,” Lexi said. “She’s probably one of my favorite people to play with. We just feed off of each other so well, and we calm each other’s nerves down. It’s just nice to have her presence out on the court with me.”

One of the ways Rubel has improved her game scoring wise has been improving an offensive move in her arsenal — the eurostep. Lexi attributes being able to fine tune this move by practicing it as much as possible in practice when the team was able to scrimmage five-on-five.

Rubel’s and Notre Dame’s third-year head coach Kirk Boeller said he’s noticed Lexi drives more to the basket instead of shooting outside because of a move like this.

“It’s all because of her hard work,” Coach Boeller said. “We have to run her off everyday after practice because she’s working on a new whatever it is — jump shot, drive or whatever. As a freshman and sophomore, she would like to shoot probably more than she liked to drive.

“Now it’s leveling out a little bit more, where she’s driving just as much as she wants to shoot. She’s so strong, and if she gets to the basket and it doesn’t go in, she’s usually shooting free throws.”

The Bulldogs have reached the quarterfinals for the past three seasons and played a total of 29 games, but that wasn’t the case this winter. Notre Dame had to drop a tournament and then missed three more games because of Snowmageddon last month. Lexi also had to miss two games at the start of January due to an illness.

Coach Boeller joked with Rubel that in order to reach 1,000 points that she would have to average “a ridiculous amount.” Lexi averaged 20 points through the Bulldogs last seven games.

“She had a goal to get to 1,000, but she wanted to do it with us winning,” Boeller said. “That’s what she told me the other day, ‘I’m excited to get there, but I would much rather us win.’ That’s just the kind of kid she is.”

When asked about Lexi scoring her 1,000th point, both Matt and Michele talked about how much work and dedication she’s had for basketball since second grade. Even though the season came to an end on Saturday, it was still a day to be proud.

“She’s always had great focus no matter if it was in soccer or gymnastics or basketball,” Matt said. “When she gets her mind set on doing something, she’ll work at it and do as much as she can possibly do to get better at it. This was a testament to that.”

Since Michele has two sisters that were also 1,000-point scorers and another in Christa Turner who helped her make final-four runs at Jackson, she emphasized what it takes to reach such career achievements.

“It’s a lot of time in the gym putting up shots when maybe you’d rather be doing something else,” Michele laughed. “It also takes encouraging each other, and she and Tori motivate each other all the time. It’s always somebody always pushing and encouraging you to put the work in because when you put the work in, you usually get rewarded.”