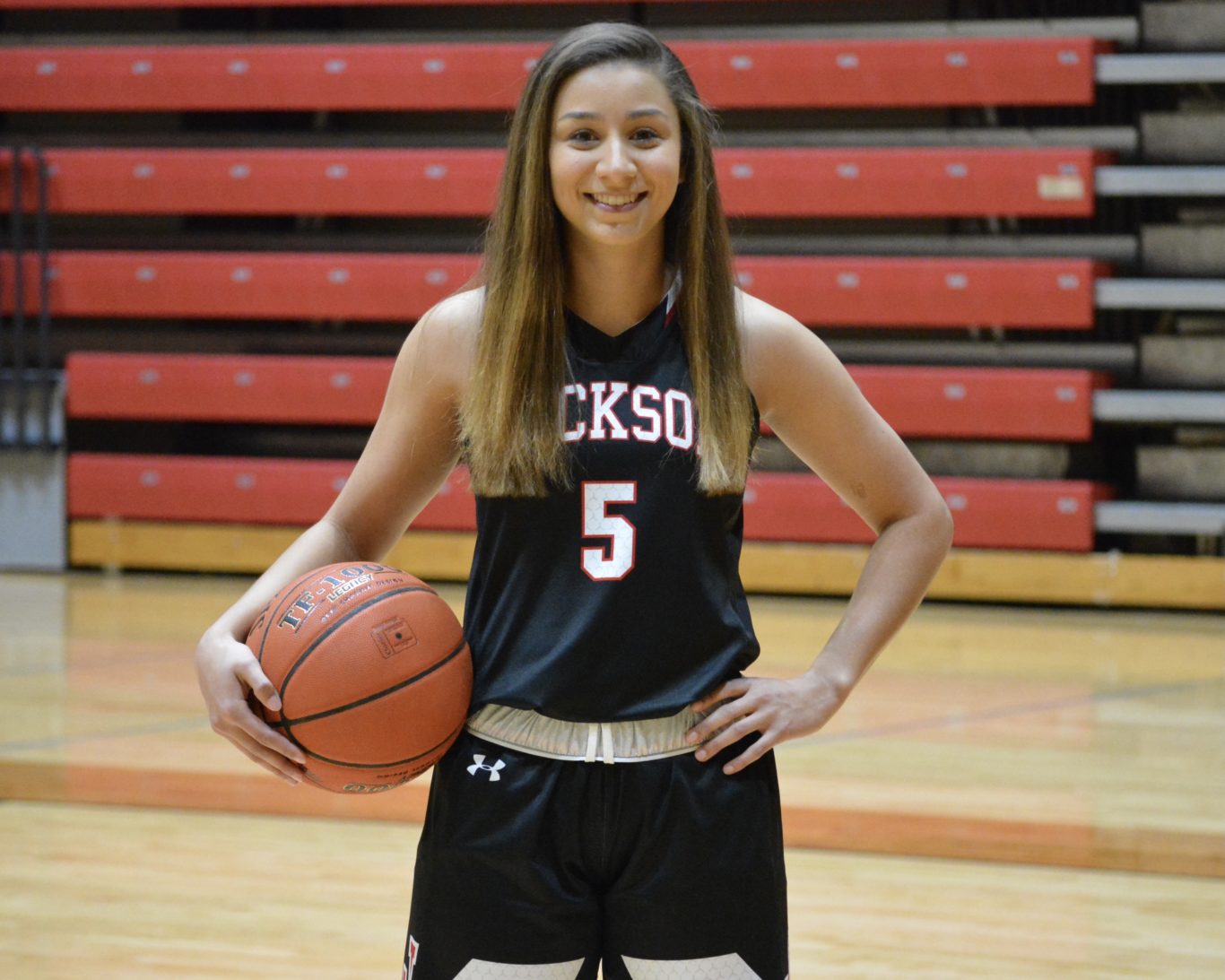 It was over 10 years ago when Jordyn “Jo” McClellan first started playing organized basketball, and the junior will undoubtedly continue to do so beyond her career at Jackson High School barring any unforeseen circumstances.

The Indians finished with an overall record of 24-5 that season as they were able to reach the quarterfinals after winning a third-straight Class 5 District 1 Championship. Jackson also won the SEMO Conference Tournament as McClellan earned all-district honors after averaging 7.1 points, 1.9 assists and 1.0 steals per game in her first year of varsity action.

Currently, however, this is Jo’s lone college offer since she was unable to suit up for her sophomore campaign after suffering a torn ACL the summer prior to last season. McClellan did so while playing with SEMO Sizzle 2022, which consists of another star talent from the area in Notre Dame junior Lexi Rubel, who fields offers from OVC members Austin Peay and Southeast Missouri State along with the Missouri Valley’s Southern Illinois.

Without McClellan last winter, the Indians only managed to finish one game above .500 at 14-13 overall as their district-title streak came to an end at the hands of Poplar Bluff 49-44 in the championship game.

McClellan said having to watch Jackson’s games on the bench last year was one of the most difficult things she’s ever had to do because there’s nothing she enjoys more than playing basketball.

“I wanted so badly to just be like, ‘Coach, sub me in,’” McClellan recalled. “I felt like I could play, but I knew I couldn’t. Basketball gives me an adrenaline rush that nothing else gives me. Just the feel of the game — I just love it. I love playing with girls, building relationships and making second families.”

McClellan said recovering from the ACL tear was a lot more difficult than she anticipated, especially in the early stages. Jo admitted she “hated” attending physical therapy in large part because of a training exercise called blood flow restriction (BFR).

BFR involves using a band or blood pressure cuff that partially restricts blood flow while working out. This allowed McClellan to workout without the usual wear and tear on her muscles that occurs from regular training.

“I knew that physical therapy would help me in the long run, and it obviously has,” McClellan said. “I’m really grateful for my physical therapist Katrina Voelker — she was awesome. [BFR] helped build strength actually, but it was terrible. There were lots of tears.”

It wasn’t until this summer when McClellan finally made her return to the court as she played an entire season with SEMO Sizzle as she had no setbacks. Jo was so nervous her first game back that she compared it to her first varsity start with Jackson her freshman year.

However, it only took until the midway point of the first half for McClellan to feel like her normal self as she recorded a game-high 14 points and hit four 3-pointers.

“That was a great feeling, and I felt like I did pretty well in my first game back — better than what I thought I was going to do,” she said. “I actually got to start, which felt good my coaches and teammates believing in me.”

McClellan said SEMO Sizzle helped her realize basketball was more than just a hobby back when she started playing for the team after fifth grade. This was when McClellan started forming bonds with Lexi and other Sizzle teammates like Notre Dame juniors Leah Jansen, Sydney Seabaugh, Saxony Lutheran junior Emma Voelker and Notre Dame sophomore Tori Rubel.

Over the summer, SEMO Sizzle won several tournaments and played against some of the top talent in the nation when competing in tournaments like the Nike Tournament of Champions and the Windy in Indy hosted in Indianapolis, Indiana.

“Everybody is obviously really good on that team — everybody contributes in different ways,” McClellan said. “Just playing Notre Dame I think is the best thing ever. My freshman year when Lexi and I both started, it was just so fun for me. We took it very seriously of course, but we had fun playing [each other].”

Now McClellan is back practicing in her Jackson uniform and will suit up as an Indian for the first time in two seasons. Along the simple joy of running up and down the court, McClellan is thrilled to be back playing with her Jackson teammates.

Heading into this season, McClellan has been focusing on her communication to become more of a leader for the team. McClellan said a major improvement in her own game has been her abilities as a defender.

McClellan said her main job freshman year was getting the ball up the court with her ball-handling abilities. Jo will continue doing that this season, but she also feels like she is now tasked to be one of the team’s top scorers — a role she’s looking forward to take on.

“[My goal this season] is to be the leader of the team and not just with communication, but I expect myself to be the highest-scoring player on the team,” McClellan said. “I hope to reach that goal. [I’ll score more] off the ball screen definitely. Pull-up jumpers, finishing lay ups and stuff like that.”

Despite not winning a district championship nor conference title last winter, the Indians still had three players earn all-district as two of them were also named all-conference. These players for Jackson were 2020 graduate Piper Guilliams and current seniors Madison Lambert and Olivia Ward.

Lambert will also be playing college basketball like McClellan as she verbally committed to Missouri Baptist earlier this month after an all-conference/all-district junior year. Last season, Lambert led the Indians in scoring (16.2 points per game) and rebounds (6.6 rebounds per game) while shooting 38.5% from beyond the arc on 156 attempts.

Lambert and McClellan both started as underclassmen together during the 2018-19 season, where Jo finished as one of the top shooters with a 40% 3-point average. Lambert led Jackson in treys with 46 as McClellan paced her with 35 that season.

“We are both obviously very good 3-point shooters, so I feel like we look to each other to score and not just one of us has to do everything,” McClellan said. “She likes to set ball screens for me, and I come off, and she pops. I pass it to her, and she’s wide open and knocks it down.

“I feel like a hand in my face isn’t going to do anything — I can make those threes, too. Just getting open shots for myself by moving without the ball and coming off screens and shooting threes like that.”

Now that she is past her injury, McClellan is hoping to win another district title and go even further into the playoffs her final two seasons as an Indian. “I’m looking to get to a state championship game this year and next year.”