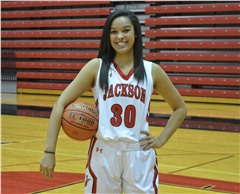 Injuries like an ACL tear can often be detrimental to a high school athlete, but for Jackson girls basketball senior Alexis Allstun, she wasn’t going to let it end her playing career.

Allstun, who is officially now ready to help lead the Indians to a third-straight Class 5 District 1 Championship, suffered the injury five games into last season.

Allstun averaged 12.6 points and 4.4 rebounds per game with a shooting percentage of 60 while also making 71 percent of her shots from the free-throw line before her year came to an end.

Heading into her junior season, Allstun earned all-conference and all-district honors as a sophomore in the 2016-17 season. It was the same season Allstun helped lead the team to winning its first district championship since 2014-15.

The Indians also reached the quarterfinals for the first and only time in Jackson Head Coach Tyler Abernathy’s eight seasons with the program.

Allstun said before her junior season began that she was tired and worn out from basketball and thought about calling it quits. The one positive Allstun takes away from tearing her ACL is that the injury opened her eyes.

Jackson went on to win a second-straight district championship with Allstun having to watch from the bench as fellow seniors Mikala “Mik” Liley and Kalli Mayfield led the Indians in scoring.

Mayfield averaged 13.8 points per game while Liley was behind her with 10.3 and also came down with 4.4 rebounds a game. Last year’s team also only allowed opposing offenses to average 36 points per game.

“I was super proud of them because it was a big change for them with me coming out — they had to do a whole bunch of different stuff,” Allstun said. “I think it improved their skills because they couldn’t just pass it in the middle. Them being able to shoot all around the outside really helped.”

It was Liley and Mayfield’s first year as starters for the Indians since Mayfield rotated off the bench before the 2017-18 season, but Liley had been unable to play due to back-to-back ACL tears.

Allstun and Liley happen to be good friends, so it was nice for Allstun to have someone to talk with that had suffered the same injury before.

“I would text Mik and ask her questions like, ‘How’d you get through this for two years?’” Allstun said. “One year was hard for me, so I can’t imagine how two years was for her. I definitely asked her for advice because mentally it was very hard, and physically, but mentally probably the hardest.”

There are a total of eight seniors on this year’s team, and they have all been able to form what Allstun calls a family-type bond. Some of these players, like Allstun and Liley, haven’t been able to play together since they were freshman.

Back when Allstun and Liley were able to play together, she recalls people telling her they both communicated well together. This is one of the many reasons why Allstun is excited to return to the court this season who was reasonably nervous to do so at first.

“I’d ask Mik, ‘How long does it hurt,’ because it’s still kind of sore right now, but I’ve also talked to trainers, and they said it’s probably going to be sore for a little bit,” Allstun said. “At first I was definitely nervous, but now I’m getting into the groove and trusting my body a little bit more.”

Along with focusing on returning from her injury, Allstun has worked on playing power forward as well as shooting from that position. She will also continue to see time at center.

“I’ve got to keep practicing on that, keep my leg strong and being able to box people out,” Allstun said.

On top of that, Allstun is also focusing on ball handling because she wants to be able to take the ball outside of the post and score.

Coach Abernathy had big expectations for Allstun’s junior campaign that was cut short, but he sees no reason why she can’t come back right where she left off.

“Alexis is very driven — always has been,” Coach Abernathy said. “She’s recovered really well, which is nice to see. She hasn’t had any set backs, hasn’t had anything slow her down and she’d done everything that was asked of her and some.”

Abernathy wants Allstun to enjoy this season since it will be her final one at Jackson and because last season was taken away from her. He also believes she still has the potential to take over games.

Allstun has averaged 11-plus points per game over the last two years, but Coach Abernathy said she is also one of the best shot blockers he has ever coached.

“She has great body awareness and body control — she can block shots and not foul,” Abernathy said. “Rebounding the ball, she is very good. She’s just very instinctual on both ends of the floor when it comes to rebounding. She has the ability [to take over games], and I think you’re going to see that at times.”

Allstun said in order to continue to take over games she will have to continue working on her leadership skills by talking with her teammates and getting them comfortable with plays.

Allstun and Abernathy are both in agreement that this year’s team is similar to the 2016-17 squad because of the balance as well as players being able to rotate at multiple positions.

“This group has a chance to be really good, and I think they know that,” Coach Abernathy said. “It reminds me of the group I had a couple of years ago where you had Alexis inside, Nikki Sotak and Rylee Stafford who could really shoot it and the kids who could really attack. It gives you a lot of options, so I think they have an opportunity to play well.”

These Indians should not have much trouble scoring the ball with Allstun, Liley and Mayfield all having averaged more than 10 points per game as starters. Allstun believes they can be quite the scoring threat.

“We all communicate really well on the floor just by looking at each other,” Allstun said. “Just me rebounding and passing the ball back out or them passing it in — I think we can do something.”