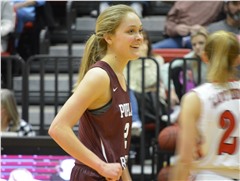 The Jackson girls basketball team made one step closer to winning another SEMO Conference Championship this season after defeating foe Poplar Bluff 57-45 last Thursday night at the Event Center.

The Indians (15-3, 4-0 SEMO) trailed the Mules at halftime 27-23 as Poplar Bluff junior Kiley Bess hit four of her seven 3-pointers in the first half.

“Sometimes in basketball you tip your cap, and [Bess] is really good,” Jackson head coach Tyler Abernathy said. “She made a lot of tough shots. Our game plan was to make sure we didn’t give her layups or free throws.

“We were able to do what we talked about, but she had some tough shots. At halftime we talked about just needing to keep taking care of our offensive end and keep putting pressure on them to continue to make shots.”

Bess, who holds the Poplar Bluff single-game scoring record (50) for both the boys and girls program, currently has six Division-I offers. She recently picked one up from Arkansas State, while she has also fielded offers from Jacksonville State, Murray State, Oral Roberts, Southeast Missouri State and UT Martin.

Bess was able to hit three more shots from beyond the arc in the second half to finish with a game-high 25 points, but Jackson’s “Big 3” senior Alexis Allstun, Mikala “Mik” Liley and Kalli Mayfield combined for 41 in the win. Allstun scored a team-high 19 points as Mayfield and Liley paced her with 12 and 10 respectively.

“Offensively, I don’t know if I’ve had three kids that play in that 15-foot area and pass it as well as they do,” Coach Abernathy said. “They’re all unselfish kids — they aren’t concerned if they score, but they’re concerned if their team scores.

“They’re consistently making the right play, and that’s why they’re shooting 70, 80 percent from the field in games because they’re shooting layups and passing up good shots for great shots.”

Allstun only scored two points in Jackson’s last game and even fouled out when the Indians defeated Marquette 50-42 in the Lindbergh Tournament third-place game.

“[Allstun’s performance tonight] was so big for us,” Abernathy said. “She’s a really difficult cover, and when she’s on the floor it makes us really good on offense because she draws so much attention.”

Jackson was able to take a nine-point lead in the first quarter, thanks to a 6-0 run where senior Alexis Allstun made an old-fashion 3-point play to start the run. Sophomore Madison Lambert then hit a 3-pointer after catching an inbound pass.

Bess was able to answer with a 3-pointer of her own before the end of the first quarter, making the score 15-9 after the first eight minutes of play. This allowed the Mules to eventually tie the game at 17-17 and take a four-point lead into the locker room.

Bess made seven of Poplar Bluff’s 11 3-pointers as sophomore Emma Johnson came up with four off the bench for the Mules. Two of her four came in the second quarter.

Jackson freshman Jordyn McClellan failed to score a point in the first half of play, but she was able to give her team the lead nearly midway through the third quarter. This was after Allstun scored on a putback shot to make it 29-27, allowing McClellan to give the Indians the lead with her team’s second and final 3-pointer of the game.

The Mules didn’t regain the lead in the third but were able to tie the game right after McClellan’s 3-pointer when Bess hit her fifth of the game, making the score 32-all with four minutes left.

Like Bess, McClellan has also received an offer from Murray State. This is her only collegiate offer so far.

Jackson went on a 6-0 run to follow as Allstun and Liley both went 2-for-2 at the free-throw line in the span. The Indians finished shooting 17-of-21 (81 percent) from the line in the contest to Poplar Bluff’s 2-for-5.

“[Jackson boys basketball head coach Darrin Scott] always taught me this, ‘Free throws don’t win every game, but they do win all the close ones,’” Abernathy said. “So that’s what we’re keep working on is making sure we continue to make clutch free throws.

“This is a unique team for me because I’m really not concerned with who gets fouled. They’re all good free-throw shooters and they’re all clutch players. It’s really nice when you’re not trying to worry about getting the ball to one or two kids.”

Allstun went 5-for-6 from the line as Mayfield went 4-for-5 while Lambert hit 3-of-4 to finish with eight points against Poplar Bluff.

The Mules tied the game 38-38 on a 6-0 run created by two 3-pointers from Bess and finally took the lead at 41-40 thanks to another shot from beyond the arc by Johnson with 6:15 left in the game.

The Indians were able to hold Poplar Bluff scoreless for the next four minutes to go on a 9-0 run to make the score 49-41, capped off by free throws from Lambert.

Mayfield essentially iced the game for Jackson by giving her team a nine-point lead at 52-43 with 1:31 to go, thanks to a 3-point play when she had four fouls.

The Indians faced Sikeston Monday night and will travel to Saxony Lutheran Feb. 11 before hosting their final conference game against Dexter Feb. 18, which could be for the conference title.

Jackson defeated Dexter 48-45 in the SEMO Conference Tournament Championship game. Allstun scored 17 points while Lambert had 16 off four 3-pointers against the Bearcats.