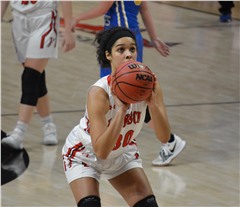 The game was hosted at Saxony as Jackson came away with a commanding 63-47 win as the Indians “Big 3” made up by seniors Alexis Allstun, Mikala “Mik” Liley and Kalli Mayfield combined for 43 points.

“When those three play well, we’re a handful,” Jackson head coach Tyler Abernathy said. “That’s as simple as it gets. … And that’s what happened tonight.”

Allstun’s team-high 17 points wasn’t enough for the game high, though, since Saxony junior Emma Brune finished with 18 on the night.

Even though the Crusaders didn’t come away with the win, it was actually a historic night for Brune since she broke Brianna Mueller’s single-season scoring record of 506 points. Brune is only three points away from ranking third on the program’s all-time scoring list.

Only three of Jackson’s points weren’t scored by the team’s starting five as freshman Jordyn “Jo” McClellan put up nine while sophomore Madison Lambert paced her with eight and had the Indians only two 3-pointers.

“She finished a couple of and ones, and Jo can score and she can obviously shoot it and handle it, but she’s played so well defensively for us,” Abernathy said. “… [Lambert] took a couple good [3s] and knocked them down. She can do other things well, too. She rebounds well, and she defends well, so she’s evolving her game. We’ll take it.”

Saxony only had one player besides Brune finish in double-digit scoring as senior Macey Smith put up 10 and had two 3-pointers in the first quarter. She only scored two points in the second half.

Fellow Saxony senior Cass Wunderlich was on pace to be in double digits after scoring eight points in the second quarter, but she failed to make another bucket in the contest. Post players senior Bri Jenkins and junior Olivia Spanley each had four.

Even though Jenkins only scored two points in the first quarter and two more in the third, she still came away with a team-high eight rebounds while going against Allstun inside the paint. Wunderlich and Brune paced Jenkins with six and four boards respectively.

“I thought we competed, but this is just two different weight classes the way I look at it,” Saxony head coach Sam Sides said. “It was a heavyweight versus a welterweight — they just pushed us around like we weren’t even there.

“They were quicker than I anticipated because I thought we might’ve had an edge there, but we didn’t really have an edge on that either.”

The Crusaders turned the ball over a total of 19 times on their home court as they only came away with eight steals. Brune, Spanley and fellow junior Makayla Mueller each had two.

Saxony is attempting to win its seventh-straight district championship this week in Class 3 District 3, while Jackson has one more regular-season tilt before hosting the Class 5 District 1 Tournament as the No. 1 seed.

Seeded behind Jackson is Poplar Bluff at No. 2, No. 3 Northwest and No. 4 Seckman, which they will face on Monday. The Indians have won this tournament two years in a row.

“We’ve played [Poplar Bluff] twice, and they’ve battled us down to the very end both times, so we’re not taking anything for granted,” Coach Abernathy said. “We’re just going to go compete and play, and see what happens.”

The C3D3 championship will be Friday at Jefferson (Festus), while the C5D1 title game will be Feb. 28.