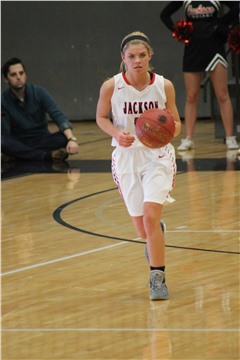 Going into the fourth quarter, the Indians had only made five of its 19 shot attempts from 3-point range.

Senior forward Abby Hermann, who finished the game with a 20-percent shooting percentage (3-for-15), started the quarter off with her final three of the game to put Jackson within seven points of the Angels.

Fellow senior guard Rylee Stafford was the next Indian to hit a shot from downtown, and she did so with five minutes and 36 seconds left in the game to bring her team within five points of St. Joseph’s at 36-31.

St. Joseph’s senior center Kelly McLaughlin, who entered the game averaging a double-double (17.6 points per
game, 12 rebounds per game), answered the three by putting her team up by seven points at 38-31 with a shot at the rim with 4:51 remaining on the clock.

Nearly a minute later is when Stafford found an open shooter in senior guard Nikki Sotak who hit a three to make it a four-point game with just under four minutes left to see which team would advance to the Class 5 Final Four.

Jackson has not made a final-four appearance since 2003, so the team naturally applied full-court pressure with the chance of playing in Columbia, Missouri, on the line.

Jackson forced three turnovers in doing so with the team’s leader in steals, senior guard Randa Norman, coming up with two of her five steals in the final four minutes.

The Indians failed to convert on each of its turnovers with Sotak’s three being the team’s final of the game to go 3-for-12 from beyond the arc in the fourth quarter before St. Joseph’s scored again to make it a six-point game at 40-34 with 1:35 to go.

Two Angels each made a free throw with less than a minute to play to go up 42-34 with 49.1 seconds left in the game.

This margin proved to be too much for the Indians to come back from with little time left on the clock. St. Joseph’s came out on top 44-36 to advance to its second final four in the last four seasons.

Stafford was the only player for Jackson to finish with 10 points or more and was tied for the game-high with 14 points, and also managed to have the highest shooting percentage for the Indians at 40 percent (4-for-10).

Stafford also made four of her five free-throw attempts, and only one other player for Jackson, sophomore center Alexis Allstun, shot from the line and missed her one attempt.

Hermann and Sotak each scored nine points from the 3-point line to pace Stafford with a combined 18, but in total only four players scored for Jackson and shot 12-for-47 from the field.

This led to Jackson scoring its second-lowest total of the season, and the only other game where the Indians scored below 40 points their 42-34 loss to Pacific at home on Feb. 4.

St. Joseph’s outrebounded Jackson 33-22, and the Angels McLaughlin came down with a game-high 12 boards. Allstun battled with her for most of the game and came down with eight of her own, but she only managed to score four points in the game.

Norman and Sotak combined for 10 rebounds in the game, but another dominant force in the post for St. Joseph’s was 6-foot-2 junior forward Alexandra Kerr.

Kerr finished tied with Stafford for the game-high in points with 14 and was second in the game in rebounds with nine.

To advance to its first quarterfinal in 10 years, the Indians first had to face Ft. Zumwalt South (17-11) in the sectional round on March 8, which was hosted at Jefferson College in Hillsboro, Missouri.

This game ended in similar fashion for Jackson as the team’s 35-point victory over Poplar Bluff (12-15), 65-30, for the Class 5 District 1 Championship.

The Indians defeated Ft. Zumwalt South by 25 points at 69-44 to reach the quarterfinals.

Allstun, Hermann and Stafford combined for 45 of Jackson’s total points in the game as Stafford scored a game-high 17 and made three 3-pointers.

The Indians end their 2016-17 season at 22-7 overall, and will only return seven players from this year’s roster due to eight players graduating.

Seven of those player’s include Allstun, who will be a returning starter, and junior forward Mah Massey as well as sophomore guard Kalli Mayfield who played in a combined 52 points while coming off the bench.