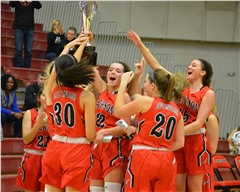 It was rightfully so that the Jackson girls basketball team defeated Dexter by three points, 48-45, to win this year’s SEMO Conference Tournament Championship last Thursday night at Sikeston Field House.

This is because the game happened to be somewhat of a battle of 3-point shots.

Two-time reigning conference player of the year Dexter senior Chaylea Mosby hit a total of seven 3-point shots in the first half, finishing with 22 points through the first 16 minutes of play. This helped give the Bearcats a 31-26 lead heading into the locker room.

Jackson’s defense only allowed Mosby to score two points in the second half.

“I thought in the second half we did a better job of guarding the perimeter,” Jackson Head Coach Tyler Abernathy said. “In the first half, I thought we did a good job when we guarded them. The problem is we lost them so many times, and [Mosby] was shooting wide-open shots. She’s a great player — you can’t give her those looks.”

The key for the Indians holding Mosby to one score in the second half was Abernathy switching his defense to a zone, which he thought simplified what his player’s responsibilities were.

Abernathy said this year’s team is a competitive group and that the players certainly weren’t happy at halftime.

“They weren’t like, ‘Man, [Mosby] is really good. I don’t know what we’re going to do,’” Abernathy said. “They were ticked, so I think it says more about their competitiveness than anything. They were mad, and they did something about it. That’s what good teams and that’s what good players do.”

First-year starter for the Indians sophomore Madison Lambert attempted a total of eight 3-pointers, making two in each half. Her final two made shots from beyond the arc came in the fourth quarter, the first giving Jackson its first lead of the game at 39-38 with 5:40 left in the game.

“You have to shoot your first shot and then you get in the flow of the game,” Lambert said. “Once you make your first one it’s just like you’re shooting during practice. You’re just making shots, and you just have to keep going with it.”

However, Dexter was able to regain the lead 55 seconds later as senior Maci McBride hit her first shot of the game with a 3-pointer to make it 41-39.

Lambert quickly tied the game with 4:32 left in the fourth quarter as both teams then went scoreless for over a minute.

Mayfield finished with five rebounds of her own while senior Alexis Allstun came down with eight on the night, which Lambert said was a huge factor in the win.

“Even if I missed a shot, I had confidence that my rebounders were going to get the ball and put it back in for two,” Lambert said. “A shot is better than no shot because it can either be rebounded or you make it.”

After getting the ball from Mayfield, Lambert hit her final 3-pointer for the Indians to regain the lead at 44-41 with 3:02 left in the game, a lead the Indians held on to.

“I’ve been here for a long time, and there’s not many kids who have shot more than [Lambert] has,” Abernathy said. “She’s going to be a really, really good shooter and hopefully tonight is a springboard for her confidence wise. The repetition, the form and everything else is there.

“I was pumped when she hit [the 3-pointers] because you could just feel the ease on her shoulders and everybody else was so excited for her.”

Allstun and Liley also finished in double-digit scoring for Jackson as Alexis scored a team-high 17 points while Mik put up 10.

Allstun and Liley were also able to come up with key free-throws in the final minutes as Allstun made two to make it 46-43 with 1:44 left in the fourth. Liley’s two free throws came with 39.9 seconds on the clock for the Indians to win 48-45.

Liley has now scored 10 or more points in all four of Jackson’s games, averaging 12 a night.

Before each of the last two seasons, Abernathy said he expects Allstun to take over games more and more. He said he saw that against the Bearcats as Allstun finished 71 percent from the floor and also came away with a steal.

“I saw it for her entire sophomore year, and I saw it for four games last year,” Coach Abernathy said. “When she’s healthy, she’s just really good. It’s just really fun watching that group. When we were struggling in the first half, Mik just played so hard and competed so much. She was not going to let them pull away from us, and I just thought that was so much fun to watch.”

Liley also came up with a steal in the contest as did first-year starting freshman Jordyn McClellan, who only finished with two points in the game but was tasked with guarding Dexter’s backcourt.

Bearcats senior Natalie Sitze, who hit seven 3-pointers against Saxony Lutheran in the semifinals, only finished with eight points and hit two 3-pointers.

Having only played in four varsity games, McClellan has officially received an offer from Ohio Valley Conference school Murray State. She scored 12 points in the Indians 66-30 win over Cape Central to start the tournament and had six against Poplar Bluff in the semifinals.

Jackson was able to overcome a 10-point deficit to defeat the Mules in the semifinals as Liley led the way with 12 points while Allstun paced her at 11. Mayfield scored nine points in the game, all in the fourth quarter.

Another key for Jackson was the impact bench players like junior Piper Guilliams and sophomore Olivia Ward had at Sikeston Field House. The two combined for 10 points, 10 rebounds, five assists and three steals in the tournament.

“As this year goes on, that’s our group that I think has to grow the most,” Abernathy said. “You have to at times be able to give those kids some spells. When we made our run [against Poplar Bluff], our bench was in.

“Even tonight I put them in with like a 1:45 left in the third. I was like, ‘We just need to hold the fort down so I can give Mayfield and Mik a rest.’ Instead of holding the fort, we actually gained points.”

Sitting at an undefeated 4-0, Jackson has three more games before the First State Community Bank Holiday Tournament starting on Dec. 16. The Indians will travel to Naylor and Visitation Academy this week before hosting conference opponent Kennett on Dec. 10.

“[Being undefeated after the conference tournament] makes us feel more confident heading into the rest of the season,” Lambert said. “Just thinking, ‘We can do this. We’re better than we think we are.’ It’s just a confidence booster for our team.”