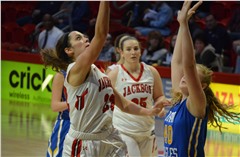 On Saturday, the Jackson girls basketball team was hoping to punch its ticket to the Final Four for the first time in 16 years. The Indians (24-5) fell short of that goal by falling to Parkway Central (23-6) by a score of 51-37, as the Colts were able to go on a 8-0 to start the fourth quarter.

“Honestly the 8-0 run hurt us, but we had an opportunity when we were up six,” Jackson head coach Tyler Abernathy said. “We missed some layups, and they turned those into points on the other end. A lot of it was [Alexis Allstun] got in foul trouble, so she couldn’t really contest in those transition baskets.”

The Indians took  their highest lead of the game at 29-23 with 3:23 left in the third quarter, as seniors Mikala “Mik” Liley and Kalli Mayfield were finding ways to score inside. Coach Abernathy thought if his team could’ve extended that lead to 10 or more points then his team would be preparing to play in Springfield.

The Indians only scored two more points in the third, allowing Parkway Central to go on a 7-0 run to regain the lead at 30-29. Mayfield was able to end the Colts run with two points of her own to make it 31-30, but 6-foot-3 junior Jayla Kelly hit a buzzer-beating layup to put her team back up.

It became a back-and-forth contest after the first quarter, where Parkway Central took a 12-9 lead as 6-foot-3 junior Jayla Kelly scored seven points to lead the Colts in the first eight minutes.

Kelly finished as Parkway Central’s second leading scorer with 13 points after not scoring in the second due to being in foul trouble and having to sit on the bench.

However in Kelly’s absence, 6-foot junior Claudia Cooke came up with 10 points. Jackson senior center Alexis Allstun only scored two points in the contest, which came in the first two minutes of the game.

“When we were able to settle down towards the end of the first quarter, we played a much better half. Sometimes when you play that legit size it just takes a little bit to get used to where you need to be.”

Jackson was able to attack Parkway Central inside the paint once Kelly was on the bench, as Mayfield scored eight of her team-high 15 points in the third quarter. This helped with Mayfield’s confidence since she had several shots blocked by Kelly in the opening quarter.

“She was just able to get out in transition, and they really played off her, and she just kind of quit caring about it and attacked the basket and finished,” Abernathy said. “Those were some good things, and she just competes. She finds a way to put the ball in the basket.”

The Indians were also able to find success rebounding the ball in the same quarter. Liley scored three points in the first quarter to finish second in scoring behind Mayfield with nine points.

“This group just competes so hard — Mik, Kalli — they just compete so hard,” Coach Abernathy said. “Eventually I think what happened is that size didn’t really matter because we just played hard. They gave us an opportunity, but it just wasn’t enough in the end.”

Another reason why Abernathy believes his team was able to almost win this game was because of his team’s conditioning.

The Indians were also able to find success from beyond the arc in the second quarter as freshman Jordyn “Jo” McClellan and senior Emily Hermann hit a 3-pointer. McClellan finished with a team-high five points in the second to finish third in scoring for the Indians as she went scoreless for the remainder of the game.

Although, McClellan’s 3-pointer tied the game at 18-all, this eventually allowed her team to take a 21-19 lead heading into the locker room.

Hermann played for a majority of the game in place of Allstun who was having to sit on the bench due to foul trouble, and Abernathy felt like the senior certainly held her own inside the paint.

“I thought Emily Hermann played a great game for us — just an unbelievable game with [Alexis] being in foul trouble, and that happens,” Coach Abernathy said. “That’s basketball. You have to have kids step up, and Emily stepped up and really kind of held that spot down.”

Leading the game in scoring for Parkway Central was senior Olivia Stephens with 17 points after going 6-for-6 from the free-throw line and hitting one 3-pointer.

Coach Abernathy said it will take him awhile to get over this loss, but he’s proud of what this team accomplished this season by winning a third-straight district championship, sweeping the SEMO Conference and only losing five games.

“It stings now, but there’s going to be a time in the couple of weeks we wake up and be really proud of what we did.”

Jackson graduates a total of eight seniors including multiple-year starters Allstun, Liley and Mayfield. The Indians will return two starters in McClellan and sophomore Madison Lambert, while also seeing players like junior Piper Guilliams and sophomore Olivia Ward increase their roles on this team.