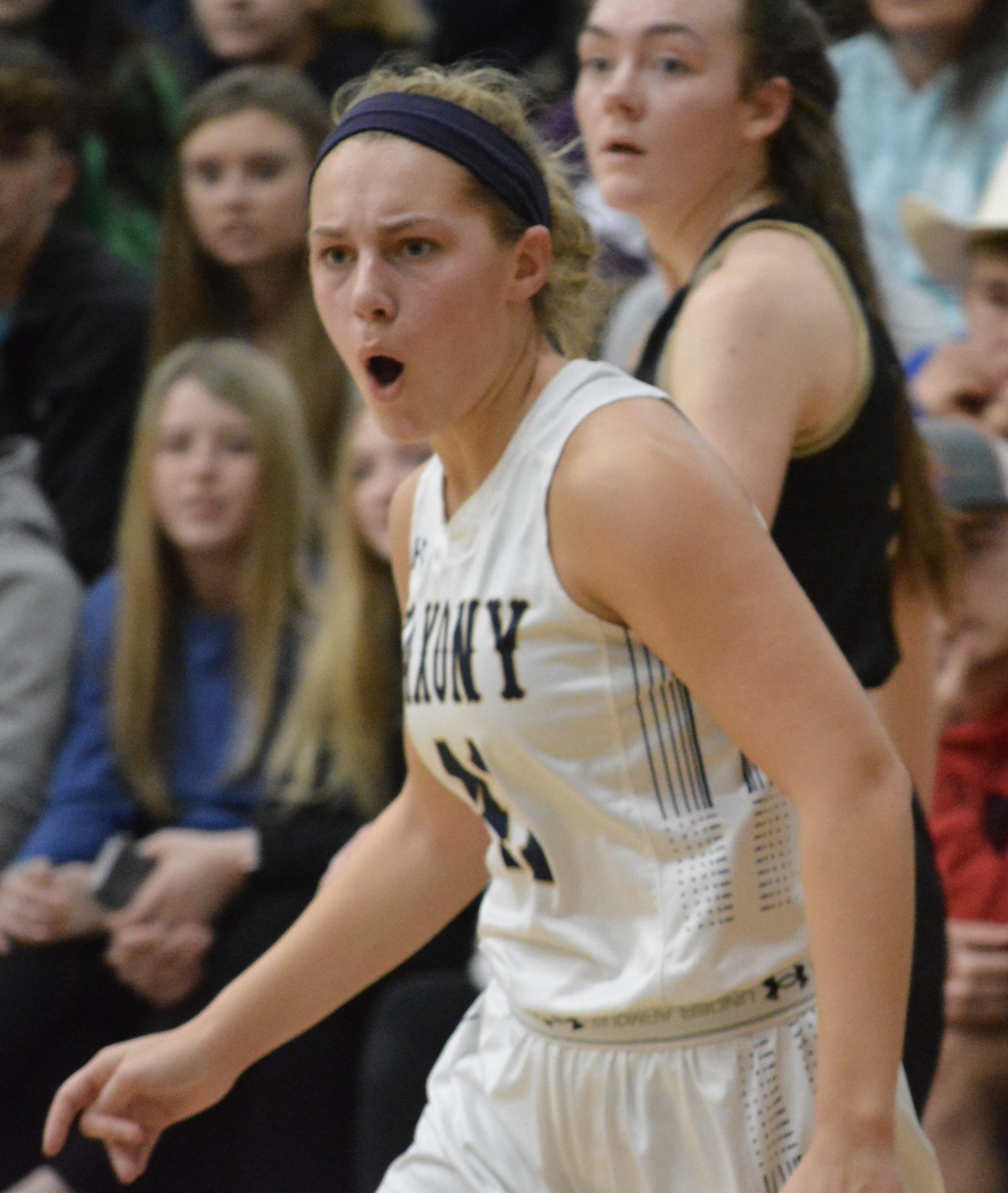 Saxony Lutheran senior Emma Brune knew she was close to becoming the girls basketball team’s all-time leading scorer heading into the Class 3 District 2 Tournament last week, but she did not want to know exactly how many points she needed.

It had been this way for some time the last couple of weeks, but Brune ended up finding out on social media before Saxony played against Fredericktown in the district semifinals last Tuesday that she only needed two points to break the record.

Brune said knowing she was only two points away affected her mentality because all she could think about was how she only needed one field goal to surpass former Crusader and current college basketball player Brianna Mueller’s scoring mark of 1,819 points.

Against Fredericktown, Brune was not able to score until the second quarter with four minutes and 56 seconds left until halftime, which came off her own missed shot on a fast-break opportunity that she rebounded and put back in for two points.

“It’s really hard when you know you’re two points away — you’re like, ‘Oh my gosh,’” Brune said. “It was a big relief when I finally got it, so I could just get it over with and focus on the rest of the game. I want to thank my family, friends and, of course, my teammates and coaches. They’ve been awesome through this whole experience and helped me out a lot.”

Brune scored eight more points in the contest to finish with 10 in the Crusaders 66-35 win over Fredericktown as three other Saxony players finished in the double-digit scoring column as well.

This win allowed the Crusaders to play for a ninth-straight district championship, where they defeated West County 64-52 to claim their eighth district title in a row on Friday. Brune led all scorers in the contest as she produced a game-high 25 points as her all-time scoring mark now sits at 1,853 points and counting.

“This program means so much to me,” Brune said. “We seniors have put so much work in for it, and winning the district championship for the fourth year in a row for me is just huge.”

“Brianna is an awesome player, and she works super hard,” Brune said. “This is a huge honor to be up [in the record books] with her.”

Brune’s role as a scorer increased significantly as an upperclassmen after producing 658 points her first two years as a starter compared to the 1,195 she has now totaled over the last two seasons. Brune eclipsed 1,000 career points midway through her junior year and eventually broke Mueller’s single-season scoring record by finishing with 590 in 2018-19.

Heading into this season, Brune was only 572 points away from becoming the Crusaders all-time leading scorer. It only took Brune 26 games to accomplish this feat as she now has a new career-high 605 points in 27 contests, whereas it took her 30 to score 590 last season.

Brune currently averages 22.4 points per game, and the 5-foot-6 guard often has to play inside the post against opponents who are sometimes half a foot taller than her, like Fredericktown sophomore Kyndal Dodd (6-foot-1).

“[Saxony head coach Sam] Sides has really pushed me to be more of a leader, and I’ve had to be a lot more outgoing and just push myself to work even harder,” Brune said. “It’s definitely tough [playing in the post], but I just have to create space and try to [get the ball] in.”

Brune, who will play soccer in college and signed with Southeast Missouri State in January, often scores off fast breaks when she has stolen the ball or by driving and slashing through defenders. One way Brune has evolved as a scorer this season is with the mid-range jumper.

“I’ve honestly been working on [my jumper] for four years now, and I’m just now starting to hit it,” Brune said. “It’s just a confidence thing, and once I start getting them, then I’m a lot more confident, and I start taking them more.”

“It’s such an honor [to have my name in the record book], and I take a lot of pride in my defense,” Brune said. “That’s just what I love the most, honestly.”

Brune has the chance to break one more record still held by Mueller, which is the all-time field goals mark of 696. All Brune needs to do is make nine more shots to break this record as she sits at 688 heading into the Class 3 Sectionals.

Following last season, Brune was named to the Class 3 All-State team for the first time in her career after averaging 19.7 points, 3.9 rebounds, 2.8 steals and 1.5 assists per game. Brune is now averaging a total of 22.4 PPG, and she has also increased her other averages to 4.8 RPG, 3.6 SPG and 3.0 APG in her final season.

“Emma has been starting for me since she was a freshman,” Coach Sides said. “You could tell she was special and had a great motor on her. She has gotten a little bit better and a little bit better all the way through, and she’s been a big-time scorer these last couple years because we had to have her.

“She’s always been a really good defensive player and ball handler, and a scrappy, effort player. She’s really developed and gotten stronger, and she’s a very strong-minded person — as tough as I’ve been around. You’re not going to get her shook up. She’s just a great athlete and competitor.”