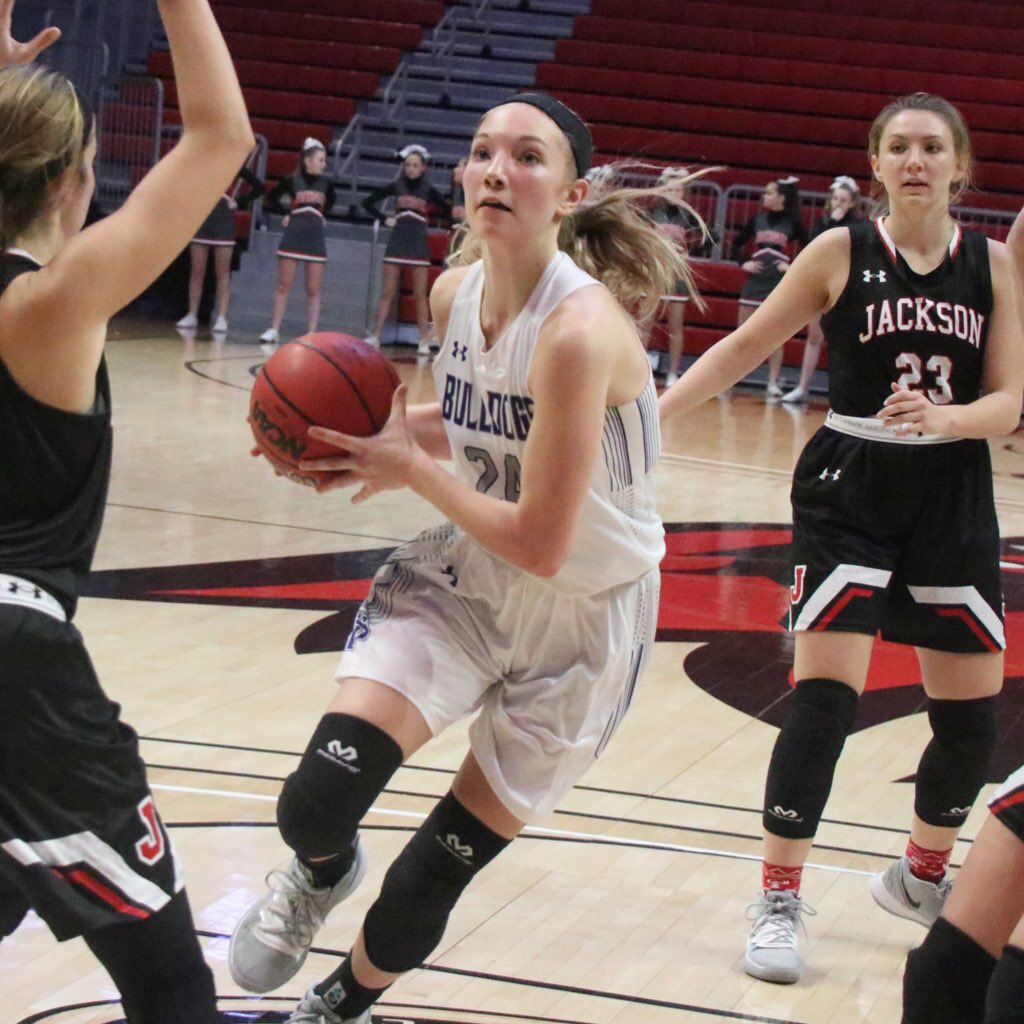 The Cape Notre Dame girls basketball team had reached the championship game of the First State Community Bank Holiday Classic for the last two seasons, but the Bulldogs fell to Saxony Lutheran each time.

Notre Dame entered this year’s tournament as the No. 1 seed after winning the SEMO Conference Tournament earlier this month and did not have to face the Crusaders for the title.

The Bulldogs instead met the No. 2 seeded Jackson Indians for the Holiday Classic Championship on Saturday evening at the Show Me Center. Jackson was the team Notre Dame defeated by a score of 52-34 for the program to capture its first-ever conference tournament title.

The Bulldogs won their second tournament of the season by defeating the Indians by nearly 20 points once again, this time at 57-38 to take home the Holiday Classic Trophy. Notre Dame head coach Kirk Boeller may or may not have tucked the trophy into bed later that night.

Senior Riley Burger, who was one of the three Bulldogs to be named to this year’s Holiday Classic All-Tournament Team, handed Coach Boeller the trophy following the game before heading to the locker room. Boeller asked Burger if she wanted to take the trophy with her instead, to which Burger replied, “You can tuck it in tonight like you tucked in the last one.”

The two shared a laugh after the exchange as Coach Boeller then talked about how some of his top defenders like Burger impact games for his team.

“We’re long, and we’re quick,” Coach Boeller said. “There’s times where I forget that I’m supposed to be coaching, and I’m just kind of watching like, ‘Holy cow! Did Riley just do that?’ Having that quickness and athleticism — we’re lucky as a program to have that.”

The Bulldogs were able to go on a 7-0 run to start the game against Jackson after Burger recorded a steal for a fast-break score with under six minutes left in the first quarter. Jackson broke the run nearly one minute later, but the Indians trailed Notre Dame 17-6 heading into the second quarter.

Notre Dame eventually took a 13-point, 28-15 lead heading into the locker room after the Bulldogs made three 3-pointers before halftime. Sophomore Lexi Rubel hit two and junior Delaney Dohogne made the last one.

In the second half, Jackson was able to make it a 10-point game at 30-20 after junior Madison Lambert hit a 3-pointer. However, the Indians only scored nine more points in the half to Notre Dame’s total of 16 in the third.

“Lambert is a phenomenal player,” Coach Boeller said. “She can shoot, and I was talking to my assistant about how she’s [dangerous] under the basket, too. She’s developing an awesome touch [in the post], so she’s very tough to defend. We just had to make sure we locked down everywhere else.”

The only player for Jackson to score in double digits was Lambert, who finished with a game-high 23 points and hit four 3-pointers. The second-leading scorer for the Indians was senior Piper Guilliams, who only managed to produce five points.

“That hurt us tonight,” Jackson head coach Tyler Abernathy said. “We’ve shot it well this year, but we just didn’t tonight and that’s going to happen sometimes. If we don’t start out so poor and don’t turn it over, maybe those kids get in a better rhythm and shoot it better. There’s a lot of ‘what ifs’ here, but [Notre Dame] is good.”

Notre Dame’s defense held each Holiday Classic opponent it faced to under 40 points as No. 8 seed St. Paul Lutheran only scored 14 against the Bulldogs in the quarterfinals, while No. 4 Oran put up 39 on Notre Dame in the semifinals.

“[Winning this tournament] started on the defensive end,” Coach Boeller said. “That’s our focus and how we want to play. I thought [our defense against Jackson] especially was probably the best we’ve looked this year. If we play like that, we’re tough.”

Other top defenders for Notre Dame include sisters Lexi Rubel and freshman Tori Rubel, who each hauled in multiple rebounds, deflections and steals throughout the tournament.

Lexi credits her team’s defensive success to the communication the Bulldogs have on the court, but when it comes to Lexi and Tori, they do not have to say much.

Offensively, the Bulldogs did not have a single player place among the top five scorers, but Lexi Rubel and senior Emily Kellum finished seventh and eighth overall with a total of 37 and 34 points, respectively.

Rubel and Kellum combined for 31 points against Jackson as Lexi scored a team-high 18 points after hitting a game-high four 3-pointers to help lead Notre Dame win the title. Rubel scored 12 versus the Indians in the conference tournament.

“[Jackson] is a good team, so we need to be ready for them again because they’ll come out stronger,” Rubel said. “They’ll be mad about this loss especially. … They were playing my drive a lot, and they know I like to drive. That just opened up the 3-point line for me.”

Kellum’s 34 points in this year’s Holiday Classic came off the bench after Dohogne was inserted into the starting five. Dohogne earned a starting spot after helping Notre Dame win the conference tournament as she scored 16 points and hit four shots from beyond the arc against Jackson in the title game.

In the first round of the Holiday Classic, the Bulldogs did not have to rely much on their starters against St. Paul in a 75-14 win as Kellum led all scorers with 16 points. Dohogne, Lexi Rubel and Burger still managed to combine for 35 points in limited playing time.

Against Oran, Tori Rubel managed to lead the Bulldogs in scoring with nine points, while Lexi paced her with seven. Sophomore Leah Jansen finished second in scoring behind Tori with eight points, while Burger and Dohogne each scored six against the Eagles.

Dohogne and Lexi Rubel were the other players for Notre Dame along with Burger to be named to the 10-member Holiday Classic All-Tournament Team, while Jackson, Oran and Saxony each had two and Cape Central placed one.

Making the team for Jackson was Lambert and fellow junior Olivia Ward, who the Bulldogs held scoreless in the title game. Ward scored 16 points against Saxony for a 59-54 win in the semifinals. Lambert finished as the tournament’s third-leading scorer with 52 points.

Oran junior Katie Webb, who finished with the second most points in the tournament at 58, and senior Kaylee Payne, who finished fifth with 39, made the team. The Eagles fell to Saxony 63-50 in the third-place game.

For Saxony, it was none other than senior Emma Brune being named to the all-tournament team once again, who also won the Holiday Classic’s scoring title with 72 points. Senior Olivia Spanley was also named to the team for the Crusaders.

Central sophomore Ella Vogel, who was also named to last year’s all-tournament team as a freshman and finished this year with 43 points, earned the only spot of the team for the Tigers. Central won the consolation championship with ease by defeating Woodland 64-45.

This was the last tournament of the regular season for Notre Dame with the next being the Class 4 District 1 Playoffs, which the Bulldogs will host. Notre Dame won its first district championship in nine years last season and reached the quarterfinals.