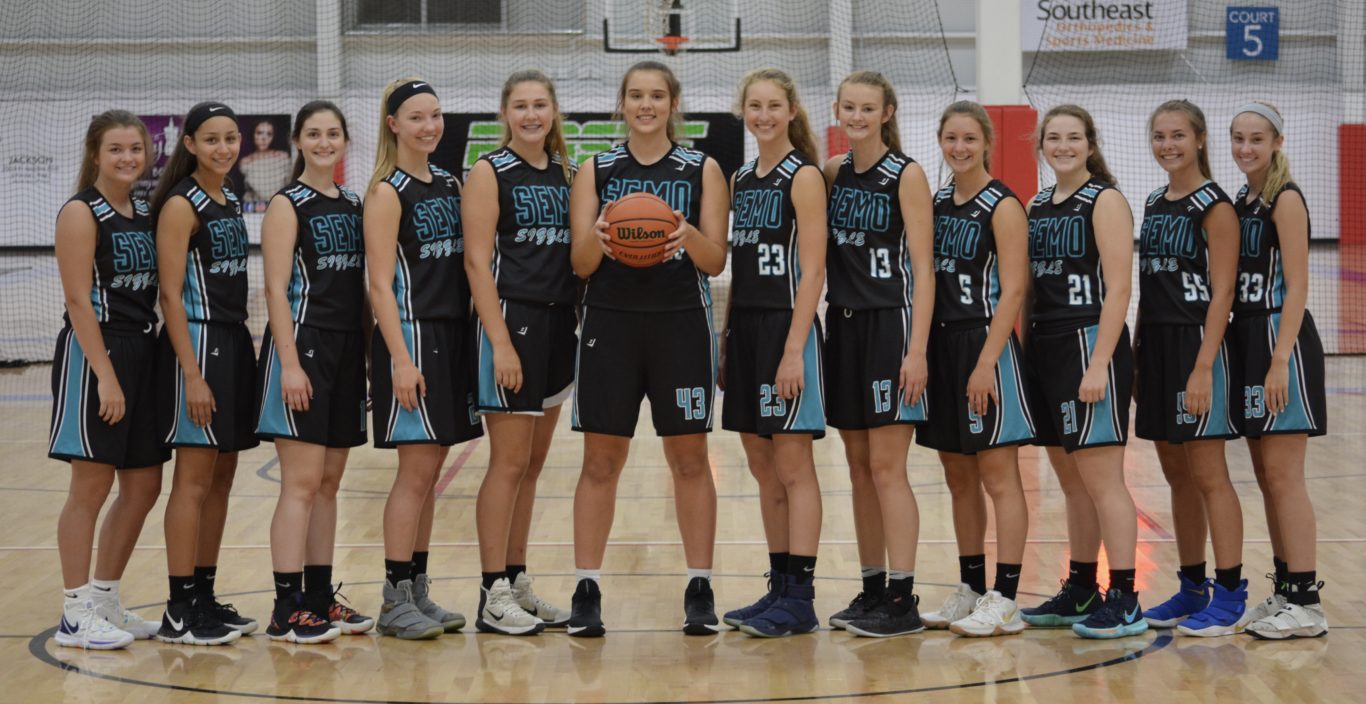 Most athletes spend their summers training for the upcoming season of their sport in a variety of ways, and for the past several years you could usually find several area girls basketball players in a gymnasium as members of the SEMO Sizzle.

The 2022 team consists of 12 players from the 2022 and 2023 class, with six players hailing from Cape Notre Dame, two from Jackson, two from Saxony Lutheran, one from Fredericktown and lastly one from North County.

The other two players that make up the 12-player roster are Fredericktown’s 2022 forward Kyndal Dodd and North County’s 2023 forward/center Lainey Calkins.

“I feel that we have a very special group — girls basketball in Southeast Missouri is back on the rise,” SEMO Sizzle head coach Matt Rubel said. “Even locally now we see teams in the bootheel that have great players. There are teams that just a little west of here or maybe in Southern Illinois that have great players, and we compete against them in the SportsPlex.

“Everybody’s abilities go up when you play against good competition. Southeast Missouri basketball on the girls side has really gone up and will continue to do so the next four, five, six years.”

Coach Rubel played basketball at Notre Dame until he graduated in 1996 and went on to play collegiately at Maryville University for four years. After that he focused on making a family with his wife Michele.

Matt started coaching when his daughter Lexi was in the second grade, which is when he met most of the players on this team.

Coach Rubel said he’s noticed a difference in area girls basketball because of how many more kids have started going out for the sport and continue to play it competitively.

Even though these girls on the roster aren’t on the same high school team, they still have created a bond to last a lifetime. Each of them have the Life360 application on their phone, which is a location-sharing app where a person can get notifications when another person comes and goes from home, work, school and also when they complete drives.

The only people allowed to be on the SEMO Sizzle Life360 group are the players since Coach Rubel said he and the other coaches don’t have access to it.

“We were just at a tournament one time, and I forgot whose idea it was, but we sent it on our little group chat and all joined it,” Lexi said. “I randomly check it sometimes to see where everybody is at.”

Voelker said making the transition from playing at Saxony to then playing for the SEMO Sizzle is easy because of how much she and the rest of her teammates get along. “We’re all such good friends that we can be rivals and teammates at the same time,” Voelker said.

One motivating factor heading into this summer season for the players from Jackson, Notre Dame and Saxony was that each of their high school season’s ended in the quarterfinal round. If their teams had won the game they would have advanced to state, so they had something to prove.

“We had a lot of success with our school teams, and just coming together and having more success made [this year] even better,” McClellan said.

Before players started suffering injuries towards the end of the summer season, the Sizzle (24-8) won their first four tournaments of the season starting off with the Cape Girardeau Hoopz Tip-Off Classic held in March.

SEMO then claimed the Farmington Spring Classic Championship the very next weekend and followed that up by winning it all in the Coach T Classic held in St. Louis the weekend after that.

Two players from the SEMO Sizzle have Division-I offers as McClellan was offered by Murray State early into her freshman season this past year. Southeast Missouri State offered Lexi Rubel last month.

After the Coach T Classic, the Sizzle were able to get a one week break from games before heading to Nashville to play in the Music City Madness the last weekend of April. The team suffered its first loss of the season in the tournament to Woodz Elite by one point at 48-47.

SEMO still went on to finish first in Pool B after defeating Kentucky Premier Bodine by 30 points (60-30) in the final game of the tourney and finished 3-1 overall.

Next up for the Sizzle in their 2019 campaign was the United States Junior Nationals Girls Basketball’s 12th Annual Gateway Challenge, where SEMO finished 2-2 overall. Calkins, McClellan and Rubel were selected to the USJN Pool All-Star Team following the tournament.

The final time SEMO suited up for games this season was during TFN’s Run for the Roses Classic earlier this month held in Louisville, as the Sizzle finished 1-4 with several players unable to suit up. The tournament included teams from Canada, Florida, Maryland, Oklahoma and New Jersey.

“We started from playing at the SportsPlex and now we’ve taken it further,” Lexi said. “We’ve played people internationally, and I like seeing all of those teams and how they play. It just shows how far we’ve come.”

Lexi finished as the team’s leading scorer this year with an average of 12.4 points per game, while also leading the Sizzle in rebounds (8) and assists (3) per game. She also recorded a team-high free-throw percentage of 75.

McClellan finished behind Rubel with 10.2 points per contest and was tied for second in assists with two. Calkins was third in scoring for SEMO Sizzle with 7.4 points as she also came up with 8 rebounds a game.

Also showing up plenty in the stat sheet was Lexi’s sister Tori, who produced 5.0 points, 3.0 rebounds and 2.0 assists every game. Tori will join Lexi in Notre Dame’s backcourt this season.