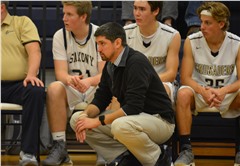 Five hours before the Saxony Lutheran boys basketball team had an away game against Farmington on Dec. 7, Kevin Williams officially resigned as the team’s head coach.

Williams, a two-time Class 3 District 2 Coach of the Year, led the program to back-to-back district championships and an overall record of 72-17 in his first three years at the helm for Saxony. The 2015-16 team set the program record for most wins at 24, which was then broken by the 2016-17 team with 26 wins.

The Crusaders were also one game away from making the Class 3 Final Four that historic season by reaching the Class 3 Quarterfinals. Saxony fell to eventual second-place Whitfield 66-47, which was led by current Mizzou basketball player Torrence Watson.

What led Williams to resign from his position was because one of the player’s parents was unhappy with what Williams described as being “realistic.”

“They were making a mountain out of a mole hill really trying to get me to be a different coach,” Williams said. “I’ll tell you this about myself — I am hard. I am hard when it comes to coaching. I expect a certain level of effort, which is basically pretty much everything you have. If you’re not giving me that — I’m going to be even harder on you because I know you’re capable of more.”

Williams went on to say no matter if it’s his best or worst player, he expects his team to win. He said his players have to do certain things in order to accomplish that.

“I’m talking about the little things like paying attention when you’re away from the ball, being ready to help take a charge and making the extra pass on offense,” Williams said. “Not trying to do things that you’re incapable of, so a little bit of basketball IQ combined with what we teach you everyday in practice. Because if you’re not going to use any of the stuff we do in practice, then why do we do it?”

Williams said it was a frustrating decision to step down as head coach because he believes this year’s team does have the potential to succeed.

Williams said the players were trying to be like last year’s Crusaders, who were able to outscore opponents.

“It’s not last year’s team, and it’s not the team from two or three years ago,” Williams said. “Those teams at times were lazy on defense and didn’t necessarily play as hard as they could, but they had the talent and skill level to go out and beat people offensively. This team, we don’t have that. We were going to have to grind out some ugly wins, outrebound people and play better on defense. That wasn’t happening.”

Williams said coaching is about being realistic with what the film shows and what the statistics tell. He continued to say if he were not able to do that, then this was no longer a good fit for him.

“I do appreciate Saxony giving me the opportunity that they did,” Williams said. “We had a historic run out there — we set records in the first two years for most wins in program history. Last year that group had a tougher schedule, and they still had a great year. I really appreciate all the kids that have played for me, and a lot of them are still there and communicating with me and appreciate what I gave them.”

Chris Crawford, who has served as Williams assistant coach, took over as the interim the same day of the resignation since the Crusaders still had to play Farmington.

Crawford said by the time the team arrived in Farmington they were all tired of answering messages about what was going on. Crawford had a meeting with the team before the game.

“We just talked about some things and I said, ‘If you have anything you need to get off your chest this is the time,’” Crawford said. “They were OK. I know a lot of them were upset, and there were some that weren’t. It’s kind of what you would expect in a situation like this.

“I told them, ‘For those of you that are upset that Coach Williams is gone you can honor him by the effort that you put out tonight. If it’s not something that has upset you just play your normal game.’ We talked a lot and it was good conversation, but this is something college kids are supposed to deal with. Not high schoolers.”

Saxony fell to the Knights 74-38 that night and still have yet to win a game since the team’s season-opener in the Rolla “Duke” Herbert Classic, which came against Crystal City at 61-41.

In the fall, Crawford served his first year as the Saxony boys soccer team’s head coach while also being the girls soccer head coach for the past two years.

“It’s a lot, but it’s something that I kind of have to do all the time is prioritize my time,” Crawford said. “One of the biggest things that led me to take it was the kids. They’re good kids, and I love being out there with them. For me to be able to step in and guide them through this year is something I’m glad to do even though it puts extra stress [on me].”

Crawford is the interim for the rest of the season.