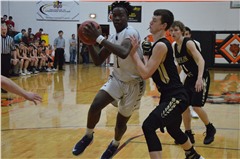 When the Saxony Lutheran boys basketball team’s current head coach Kevin Williams took over the team two years ago, his goal for the team was to win a championship.

Coach Williams told his team of his goal for them the summer he took over in camp, and Saxony has now reached the goal he set for them by winning the Class 3 District 2 Championship.

“I came in and I told them, ‘You will win a championship,’” Coach Williams said. “That’s pretty much my mentality everywhere I go, and if that’s not your goal then you really shouldn’t probably be [coaching]. We actually had pieces to the puzzle, and there was a lot to work with.”

On Thursday, February 23, following the girls team’s championship win, Saxony faced Doniphan and defeated the Dons handedly by 30 points at 96-66.

The Crusaders were able to jump out to an early lead in the first quarter due to the team’s rebounding efforts, and Saxony never looked back.

Past the halfway mark of the first with one minute, 30 seconds left in the quarter is when Saxony jumped to a double-digit lead at 23-11 thanks to an assist from senior guard William Rogers to junior forward Jalen Williams for a 3-pointer.

Rogers filled the stat sheet in this game and finished with a team-high 23 points while also nabbing seven rounds, had five assists and one steal. He was orchestrating the offense throughout the game, which hardly turned the ball over in the first  half.

“We’ve been shooting the ball well, and that always makes [the offense] look good,” Coach Williams said. “We exploited a few of their gaps, we got the ball inside also and we rebounded well. We had a lot of offensive put backs that makes it look like we are playing well when maybe we are not.

“Doniphan’s well coached — I know [head] coach [Logan] Nutt, and he does a good job. They’ve got a couple of kids that are lights out. That No. 4, he can play with anybody.”

Wearing jersey number four for Doniphan was junior Klay Barton, and he hit a total of four three-pointers in the game and scored 20 points for the Dons.

Barton only scored two points in the first half, though, taking him two quarters to get adjusted to Saxony’s height, which Coach Williams said is a major advantage for the team.

“But over the course of a game when [teams] are looking at going against 6-3, 6-3, 6-4, 6-5, 6-8 — on the high school level most people don’t see that. Just being used to playing against that — most teams aren’t used to that. I think it gives people some problems and gives us an advantage.”

Saxony went into halftime with an 18-point lead at 50-32, and when the second half of play began is when Barton hit two-consecutive 3-point shots to close the lead to 12 points.

Senior Lucas Moe then made it a 10-point game with a field goal of his own with 6:56 left in the third, which was the closest the game had been since two minutes were left in the first.

“I think it’s a game of runs — it really is, and I knew [Doniphan] would come out and give us their last shot because they are a good team — they don’t want to go home and end their season,” Coach Williams said. “What I like is we answered the run, though. We came right back and ran the lead right back to where it was when we came out at half. Part of that was our fault — we came out and we had some success with the zone because we got a little tired in the first half. They hit two [3-pointers], so we had to go [man-to-man defense], and when we got up on [Barton] that length kind of affected him.”

Another reason why Saxony extended its lead once again besides going man-to-man defense against Doniphan was how the Crusaders shot offensively from beyond the arc as well as rebounding the ball offensively for second-chance shots.

“It’s weird because we had a stretch I’d say about three quarters of the way through the season where we weren’t shooting well,” Coach Williams said. “But this past couple of weeks, and I’m not just talking about in games, I’m talking about in practice, there’s been some incredible shooting days. So, we are just going to continue to try and have fun, let it fly and see where we can go.”

Saxony made a total of 11 3-pointers throughout the game with Jalen Williams leading the team by making a total of four.

Saxony, now 25-3 overall, is entering the Class 3 State Playoffs for the first time in six years, and will face a familiar foe in Charleston (24-5) in the first round March 1 at Dexter High School.

Charleston ended Saxony’s 2015-16 season by defeating the Crusaders 59-54 in last year’s Class 3 District 2 Championship. Saxony led Charleston by 10 points after the first half of play, but the Blue Jays scored 18 points in the last two quarters to advance to the state playoffs.

For Coach Williams, this is even more of a familiar opponent since he was the Charleston player’s physical education teacher in eighth grade.

“Well, it’s worse than that because not only did they defeat us last year, but I coached every single one of those kids in P.E. when I taught there a few years ago in eighth grade,” Coach Williams said. “When I had them in eighth grade I said to myself, ‘That’s a district championship team that can get there.’

“It’s two years in-a-row running, so I’m very familiar with every single one of those kids, and they are with me. I think there’s a mutual respect among coaching staffs — I think you are going to see two very, very good ball clubs just go to war, and that’s what you want. As a fan, I know that’s what I want.”

This year’s team has now played in three win or go home games with the district title on the line. The Class 3 State Championship is now up for grabs, though, with another opportunity for Coach Williams’ goal for the team to be met.
Heading into the state tournament, Coach Williams is not having his players focus on the fact of it being a playoff game rather than just having them focus on doing their job.

“It’s not really about the fact that it’s the playoffs — a lot of times in these games you can let your emotions get you at a level where you are playing out of control as opposed to just worrying about your job, your responsibility on every single possession because we all have one,” Coach Williams said. “If you lock in and do that, then you are going to play at a championship level. We’ve proven against some of the best teams around that we are as good as they are — we can be in the game if we play the right way. There’s no need to be uptight or nervous or worried because we missed a shot or turn it over — we are a good team, so play that way.”