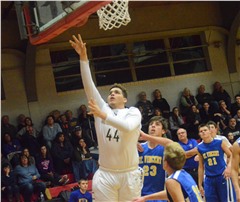 The Saxony Lutheran boys basketball team is coming off a season where it won its first district championship since 2011 and first under head coach Kevin Williams.

The Crusaders did so by winning each game in the district tournament by 30 points or more, and they finally defeated Doniphan 96-66 in the Class 3 District 2 Championship to advance to the playoffs.

Saxony came one win short of reaching the Class 3 Final Four by falling to Whitfield 66-47 in the quarterfinals, which went on to take second place after falling to Transportation and Law 78-68 in the state title game.

Saxony has officially been ranked 10th in Class 3 by the Missouri Basketball Coaches Association.

The Crusaders will be without last year’s leading scorer William Rogers, who is now playing collegiately at Lewis and Clark Community College. Rogers nearly averaged a triple double at 16.5 points, 8.1 rebounds and 8.25 assists per game last season.

Williams returns as the team’s leading scorer, having produced 9.8 points per game while also grabbing five boards a contest.

“[Williams] has improved so much,” Coach Williams said. “His range is out there at the volleyball line. At times I’m just saying to myself, ‘Is he really shooting the ball that far out?’ He does it consistently on a daily basis, so I look for him to have a really good year. He’s also bought into the fact that he doesn’t just have to shoot threes.”

This means Williams should be a more effective scorer in all assets such as playing inside the paint to score off offensive boards and also drive down the lane.

Ruark returns as the team’s leading rebounder with 7.5 per game and was third in scoring for Saxony last season at seven points per game.

Returning at center for the Crusaders is Robinson, who averaged six points and six rebounds in 2016-17.

“Just watching [these returners] in practice, it’s like William and Corie [Williams] were last year,” Williams said. “They are comfortable in the system, and they know what they are looking for. We were able to start practice and I was not having to show them every little thing. It’s like refining how to counter and how to do all these other things to make the system work as opposed to learning it.”

Saxony has a new player on its varsity roster this season, a transfer from Bismarck High School in senior Austin Jarvis, who eclipsed 1,000 points in his first three years.

Jarvis averaged 22 points per game with 7.5 rebounds and 4.5 assists per game his junior season, leading Bismarck to an 18-8 record, but fell in the first round of the Class 2 District 2 Tournament to Scott City.

“[Jarvis] is a whole ‘nother level athlete — he’s a great scorer,” Williams said. “He’s good to the basket with his right and his left hand. He plays above the rim, and when I say that I mean like quickly. The ball will come off the rim, and he can just bounce up and tip it back in the basket where most kids can’t do that. Anytime that you’re not around him, and he’s around the basket, he will dunk it on you.”

Coach Williams said he and the staff are working with Jarvis on his three-point shot, but also noted Jarvis is much like Rogers and Williams were in transition scoring the ball. Williams also said Jarvis is being recruited.

Heading into this season, the theme for Saxony is the same Coach Williams said, and that is winning.

The Crusaders went 26-4 last season en route to their district championship, and Williams believes his team has a chance to repeat the same type of season this year.

Saxony has a total of nine seniors on its roster, which has only elevated the level of competition in practice and the expectations.

“I’ve told [the players] I’m struggling to find a starting five because eight, nine, 10 of these guys could possibly be starters depending on how we want to play,” Coach Williams said. “We have the luxury of playing a smaller line up with more quickness and a little better outside shooting. We can also go big like we’ve always been able to do, so that’s a luxury a lot of coaches don’t have.”

Williams continued to say this has given him “problems” of figuring out how he and his team will approach the season, but he has also assured his players it doesn’t matter who starts because they will all contribute based off production.

One player Coach Williams is thrilled about returning and is cleared to play is Robinson because of the threat he is at the rim. Robinson also gives Saxony security in the paint as a rim protector, which a lot of teams don’t have.

With Robinson inside, this gives Ruark the ability to become a 6-foot-4 guard for Saxony allowing him to step outside and shoot. Coach Williams hopes Ruark does so because “it’s a blessing having a bunch of guys who want to shoot,” Willaims said.

Williams and the coaching staff have been analyzing everything these players do to find out which players deserve to be on the court. He continued to say if players don’t produce, then they can easily be substituted.

Two players who could have an enhanced role this season are senior guards Dewayne Giboney and Paiton Miller due to the graduation of Rogers and Corie Williams.

“From a shooting standpoint, I think we’ve got better long-range shooters in those two than what we had last year,” Coach Williams said. “With Jarvis coming in, we get a lot to the rim, maybe even above the rim more so than what those two guys played. Even though we’re losing a lot and maybe they aren’t as proven as those guys were, we are still awfully savvy and good with what we do have.”